Can't Get Enough of Those Cans

It's time for some more cooking with can recipes! As part of my preparation to live on a boat full-time, I've been experimenting with cooking with cans. You never know when you'll next find a supermarket out on the big blue sea so it is important to be able to conjure up meals out of what you have in your food storage.

My first experiment was Taco Soup and I then went on to make Corn Chowder. My next experiment has been focused on ways to make protein-rich dishes for those days when Scott isn't able to score a fish from the sea for supper. As we don't have refrigeration on our boat, we won't be able to store meat (unless it comes out of cans) so I've been looking at some vegetarian recipes. Vegetarian is also much cheaper and, as we'll be cruising on a budget, cheap is good.

I actually was a vegetarian for a few years. I decided to become one in high school. Not because of any deeply rooted ethical reasons related to animal cruelty, but, because in a moment of teenage rebellion, I thought it might annoy my mother. She tricked me by being really supportive and looking up vegetarian recipes to make for me. Teenage rebellion 0, supportive mom 1.

During my vegetarian phase, I was a really picky eater and didn't actually like vegetables or lentils or tofu or all of that stuff that vegetarians were supposed to eat. So I basically subsisted on cheese and chocolate. I ate shrimp occasionally when I went out to eat and that was about it. (I was a vegetarian back in the dark ages when restaurants didn't exactly cater for them. It's much easier now for vegies.) Not exactly the healthiest diet. I've since expanded the range of foods I'll eat. However, avocados and beetroot are still on the no-eat list which is a problem in New Zealand as the Kiwis love nothing more than sticking them in absolutely everything they eat.

My vegetarian experiment came to an end when I was living in Senegal for a summer during college with a Wolof family. One day the father asked me if I wanted to go sheep shopping with him. I said yes. Who wouldn't? We went out to the local sheep market, looked at a lot of sheep and brought two home with us. My Wolof was non-existent and my French was pretty limited, so I thought we were bringing them home as pets. It is a good thing I didn't get too attached to them because a couple of weeks later some guy with a very big knife came by the house and the sheep were, well, no more.

It turns out the sheep were really intended to celebrate Tabaski which is one of the most important Muslim holidays in Senegal. Tabaski is the Senegalese term for Eid al-Adha, the Feast of Sacrifice, which celebrates Abraham's devotion to God. When God asked Abraham to sacrifice his son, he said yes. Fortunately, God was so impressed with Abraham's willingness to sacrifice his son that he spared his son's life and a ram was sacrificed instead. As a result, on Tabaski, sheep are sacrificed throughout Senegal in remembrance of Abraham's devotion.

As a guest in the house, I got a great view up close and center when the sheep were sacrificed. Wow. That's all I can say - wow. And as a guest, I also got offered one of the first lamb kebabs hot off the grill. Despite being a vegetarian, it was one of those occasions where I really couldn't say no. It would have been terribly impolite. So I ate it. And it was DELICIOUS. My vegetarian days quickly came to an end.

Because we don't have a refrigerator on our boat or a grill, the opportunities for lamb kebabs will be limited so I've tried out the following recipe for red beans and rice. You certainly won't be fooled into thinking it is a lamb kebab, but it didn't taste too bad and the beans will give us much needed protein while out on the sea. 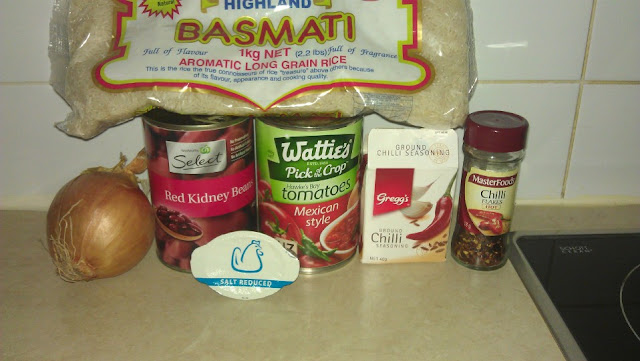 Chop up the onion and the garlic and sauté in the oil until soft. Add in the chili powder and red chili flakes and sauté for 30 seconds (to wake everything up as Rachel Ray would say). Chuck in the kidney beans, tomatoes, rice, water and chicken stock concentrate. Bring to a boil then reduce the heat and simmer for 20 minutes or so until the rice is done. Stir occasionally to keep the rice from sticking to the bottom of the pan.

Here is what it looks like when you're finished. Serves four easily. No lamb required. 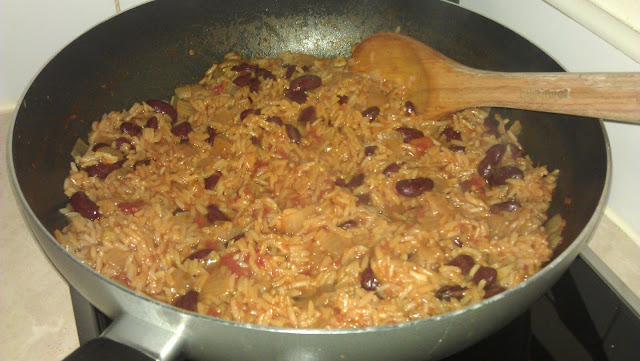