Before we bought Rainbow's End, we had her taken out of the water at Orams Marine Services in Auckland to look at the hull. Scott had brought along a friend he races with to have a look as well for us which was a real bonus as he is a very experienced marine engineer and what he doesn't know about boats isn't worth knowing.

I had never seen a boat being taken out of the water before. Basically you drive her into this contraption which has two straps attached to it and then the big machine lifts the boat out of the water. Much like I can't quite come to grips with how planes stay in the air, I cannot get my head around how these straps don't break with a big heavy object in them or how the boat doesn't fall out. But it seems to work. Here is a picture of Rainbow's End dangling in the Travelift.

Because we were pretty sure we were going to buy her, we also had her bottom cleaned at the same time. Here is what she looked like before she was clean. Gross!

Here is what she looked like half clean and half dirty. All that blue stuff on the ground is her anti-foul paint washed away by the water blaster. I'm sure it is delightfully toxic stuff. 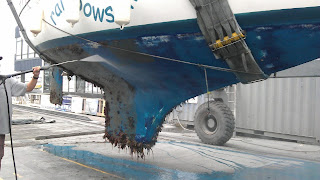 And here is what she looked like all clean and much improved. Of course now you can see that she is in desperate need of a new coat of anti-foul which Scott did do later in the summer. Basically, anti-foul paint is what it says on the tin - it keeps away the foul, nasty stuff from growing on the bottom of your boat. Unfortunately, it doesn't last forever so you have to haul your boat out regularly and slap on some more of the anti-foul paint. And it is very expensive because it is "marine" paint. Imagine paying NZ$75 for one liter of paint? I almost fell down when Scott told me how much it costs and I'm someone who can spend a lot more on a pair of shoes. One of the advantages of a small boat is less paint is needed. One thing I've learned is that if you take any normal, everyday household product and slap the word "marine" on the front of it you can instantly charge 10 times as much as you would for the non-marine version. I'm sure Scott will have something cynical to say in a future post about the cost of marine products. 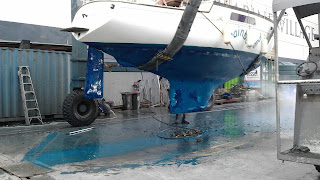 Posted by The Cynical Sailor at 7:32 PM