This is rather a short post today because why would you want to spend your time here when you could be over visiting all the other cool blogs participating in the Murder at the Marina Blog Tour & Fiesta?

Last weekend, I was sitting in the patio area at our marina doing some laundry when I happened to overhear a conversation between some boaters. Yes, yes, I know - you call that eavesdropping in your neck of the woods. But if they didn't want me to overhear, they wouldn't have been talking right next to me, would they have? So I'm just going to stick with my description of it as some casual, run of the mill, overhearing.

Anyway, I won't repeat the conversation to you, because:

(1) that would be rude - it was a private conversation after all (and no, for the last time I wasn't eavesdropping); and

(2) it was kind of boring, like most conversations about boating are.

Basically, all conversations between boaters who meet for the first time boil down to the same basic construct.

"I just walked in on a guy naked in the shower."

Okay, that's not a normal part of a boater conversation, but that's how this particular conversation started. Key takeaway - make sure you lock the door when you're taking a shower at the marina. Unless you're some sort of weird sicko who likes it when people accidentally walk in on them. In that case, maybe you should find another marina. Just saying.

This question is key. Boaters immediately categorize other boaters into categories. Sailboats vs. powerboats. Catamarans vs. monohulls. Boat bums vs. well-heeled weekend warriors.

Based upon your answer to this question, the conversation might end awkwardly or get competitive. "You poor things. How in the world do you manage with just one hull?" "We just installed a tennis court on the aft deck and it looks like all yours has going for it is mold."

"You should see the bruises I have!"

An integral part of any boating conversation is trying to one-up each other on either how much you've spent fixing stuff that breaks on your boat or who has had to contort themselves the most to fit into a small space to repair something. In boating, being miserable working in hot, cramped quarters, spending a lot of money on equipment and supplies, and getting plenty of bruises and cuts in the process is a badge of honor.

Well, that's enough about that. But the good news is I'll have to do laundry again this weekend. Who knows what juicy tidbits I'll overhear.

That really wasn't short after all, was it? What interesting conversations have you overheard lately?

Murder at the Marina - a lighthearted and humorous cozy mystery - now available in ebook and paperback format. 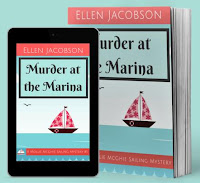