Mother Nature Is At It Again 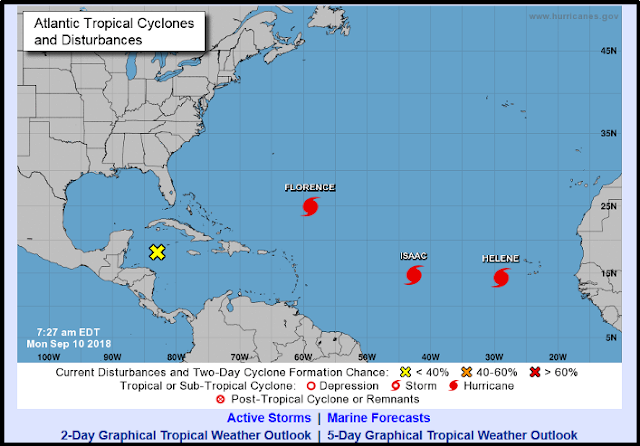 Three hurricanes in the Atlantic - Florence, Isaac, and Helene, plus something else brewing in the Caribbean which could impact Texas and Louisiana. It's pretty awful to see what's headed toward the Caribbean islands and the States right now. Especially when we just had the one year anniversary of Hurricane Irma.

Fortunately, Florida isn't in Hurricane Florence's path so we and our sailboat aren't in any danger. Unfortunately, many other people are in the cone of destruction. It's just gut-wrenching to read people's updates about prepping their sailboats, moving them to secure locations (if they can get to one), hauling their boats out (if they can find a place that can take them), making plans for evacuation, and worrying where she'll strike and if their boats will survive.

And that's just our boating friends - there are so many people on land in danger as well. Our thoughts are with everyone watching and waiting and prepping for what may be headed their way.

Are you in the midst of hurricane prep? Is there any place less prone to natural disasters? Have you been through a natural disaster?
Posted by The Cynical Sailor at 6:40 AM