So, what made you want to read this blog post? Was it the promise of Godzilla wearing a sparkly tiara or were you wondering what #BlatantBrag was all about?

Let’s start with #BlatantBrag. Notice how I put a hash tag in front of it to seem like I’m young and hip? Everyone has their own way of coping with their midlife crisis. Hash tags are mine.

When it comes to bragging, there’s three kinds of people in this world:

These are the people who never, ever brag about their achievements. They’re self-effacing, turn bright red and change the subject if you dare to praise them for something they’ve accomplished. I admire these people. I strive to be like them. Sadly, I don’t always succeed at it.

People who #humblebrag are sneaky little creatures. They’ll say something self-deprecating or downplay their achievements all with the intent of making you actually notice how awesome they are. “Oh no, I dropped the keys to my new Porsche into the swimming pool at the country club. I’m such a klutz!” Yep, I’ll admit it. I can be a sneaky little creature at times. I’m guilty of the #humblebrag.

We're in the midst of a election cycle, so there's plenty of #blatantbrag being thrown around these days. Folks running for office are often quite skilled in the art of #blatantbrag. This is where you don’t give a hoot about what people think – you’re great, you’ve done great things and you’re not ashamed to admit it.

I never thought I had much in common with a political candidate, but turns out I’m guilty of the #blatantbrag too. Have you noticed how I’ve openly and shamelessly told you how awesome I am for fixing my car both here and on Facebook? I’m such a #blatantbragger that I even gave myself my own certificate. 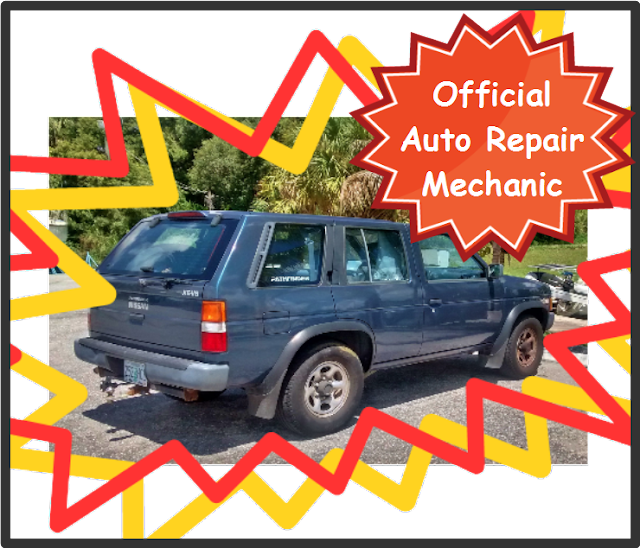 Well, in my defense (which is just the type of thing a #blatantbragger says to keep on bragging for just a little bit longer), I was pretty darn proud of myself for stepping way outside of my comfort zone and tackling something I would never, ever have dreamed of doing if Scott was here.

Our dynamic, which I imagine others of my generation are familiar with, is that men fix things and women bake brownies to reward them for fixing things. Obviously, I’m greatly oversimplifying things to make a point. But, in general, I’m really much more comfortable letting Scott take the lead on mechanical, engineering, building, fixing type activities and will happily pass him tools and brownies as required.

With Scott away, when things break I have three choices:

While option #1 has its appeal, there are some things I just can’t ignore. Like leaks on my boat, my engine not working or my car breaking. Option #2 sounds great except for one tiny problem – we’re on a budget. So, that leaves me with option #3 – channel my inner Godzilla, slap on a sparkly tiara to remind myself of my #girlpower and fix things myself.

Usually, I procrastinate things as long as I can, but when my car broke down it was a matter of life and death. Maybe not life and death, but not having a car meant a long, hot walk was involved in order to get groceries. I hate getting sweaty, so I got on the internet and, in between cute cat videos on YouTube, I researched what was wrong with my car.

By the way, I have the best boat neighbors ever. If one of them hadn’t knocked on my boat one night to tell me one of my headlights was on, it would have drained the battery and left me rather confused the next morning. It was late at night, so (#blatantbrag alert) I popped the hood, disconnected the battery and saved the battery all by myself. 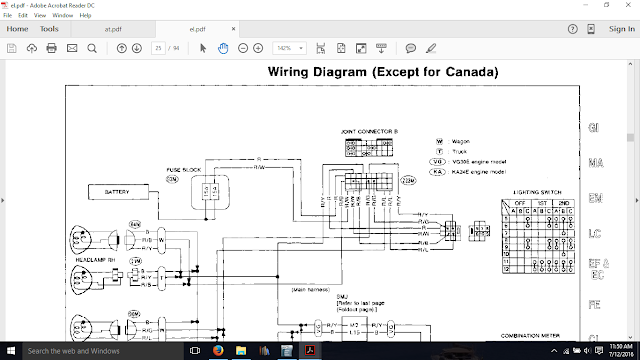 Then, I discovered the joys of online forums and YouTube channels dedicated to car repair. There are some very enthusiastic people on these forums. Not sure I could muster up the same level of enthusiasm that they have, but I’m very thankful that they’re out there. What did we do before the internet?

Thanks to these enthusiastic folks, I figured that the problem was a short somewhere in the headlight switch which was causing the left headlight to stay on. {For those auto repair enthusiasts out there thinking to yourself, why didn’t she look at the relay, there isn’t a relay for the headlights in the Nissan Pathfinder. Strange, but true.}

The first task (or Level 1) was to take the cover off of the steering column by removing four screws. Unlike the real Godzilla, my inner Godzilla has opposable thumbs so I was able to use a screwdriver for this task.

Did you ever notice reality never matches what you read on the internet? The internet guys clearly said remove the four screws. Turns out there were six screws, not four. What do I do? Remove all six? Randomly guess which are the four that need to be removed? Go back into my air conditioned boat and watch soothing cat videos? I decided to remove all six. 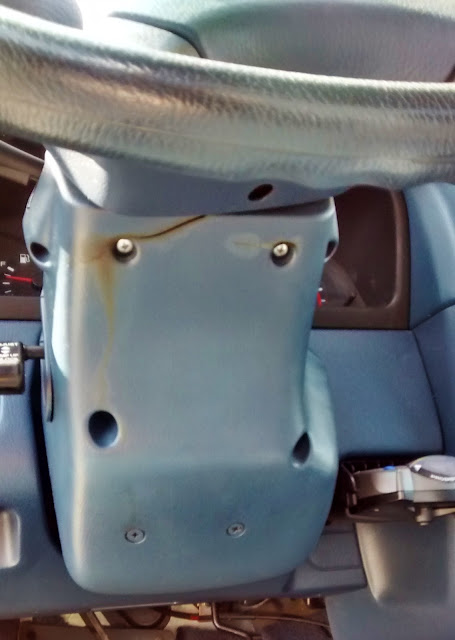 Here's another thing - did you ever notice that you never have the right tool for the job? Turns out screws #5 and #6 required a screwdriver with a long shaft to get to them. We have 13 screwdrivers (I know things like this now). None of them worked. Thanks goodness for my friend Bruce. Any tool you need, that’s the man to ask.

After removing all six screws, this is what I found. Scary, isn’t it? Level 2 unlocked. I claimed a sparkly tiara as my prize. 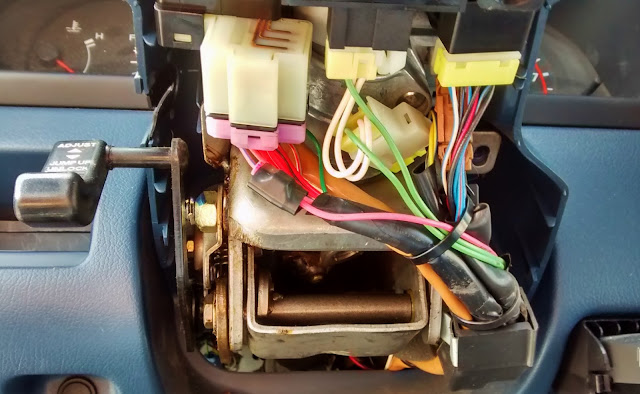 The next task was to was remove the headlight switch by removing yet more screws. Two screws later and I had released the headlight switch from captivity. By the way, it sounds simple when you sum it up in twelve words. It wasn’t. Trust me. I can see why the directions said that you needed a screwdriver and one to two beers to accomplish the task. 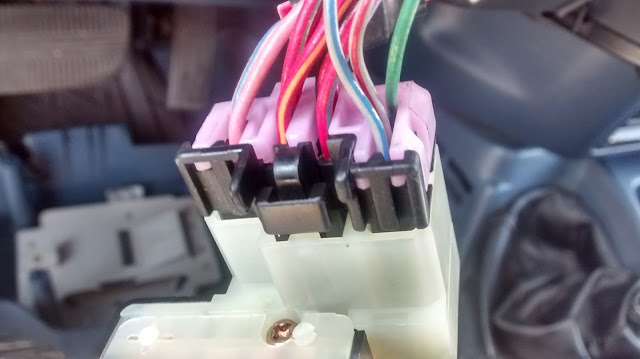 Then I had to disconnect the headlight switch from the pretty colored wires going up through the steering column. This took ages. It wouldn’t come off. I was afraid I was going to break it. I was out of beer and sweat was getting everywhere. What’s with the sweat? Godzilla is a reptile. Godzilla doesn’t sweat. Finally, Level 3 was unlocked. I claimed a cape worthy of Wonder Woman as my prize. 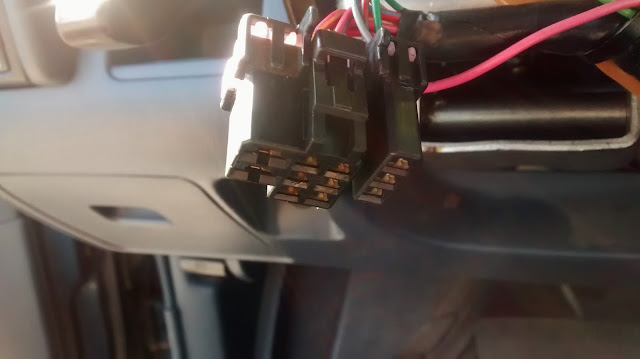 Next up – taking the switch out of the housing. The instructions were to use two flat head screwdrivers and pry it out. And drink two beers. Seriously, this guy was having a laugh. There is no possible way, Godzilla or not, to get the switch out of the housing using just two screwdrivers. I tried every way imaginable. I even put the end of one screwdriver in my mouth and jammed the other one against my stomach for leverage. All I ended up with was a disgusting taste in my mouth and bruises on my belly. I deserved those two beers. 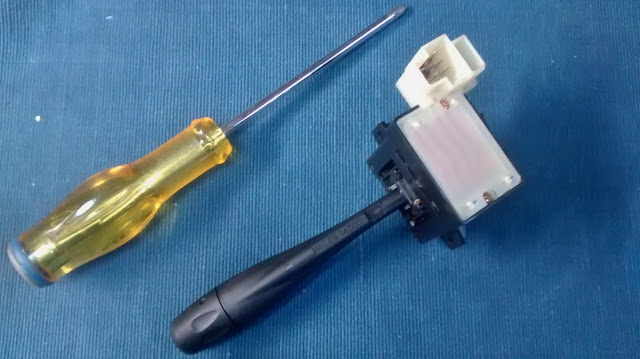 I gave up at this point for a while.

Then I had a brainstorm worthy of my tiara and cape. The answer was hair barrettes. Yes, hair barrettes. #Girlpower to the rescue. I jammed tiny hair barrettes in the sides of the housing to keep the stupid plastic tabs from locking the housing in place and then pulled with all of my Godzilla strength until it slid out. Level 3 unlocked. I now had a shiny scepter in one hand and a cold beer in the other. 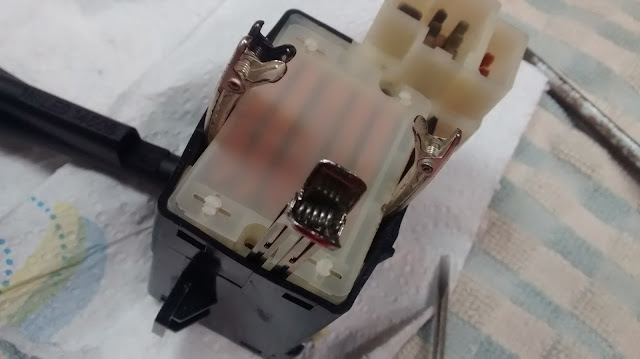 Oh goody. Time to remove more screws and reveal the inner mysteries of the switch and its magical contacts which make power flow to the headlights on demand. You can see where the switch is burned from when the electricity arced and allowed one of the headlights to stay on. 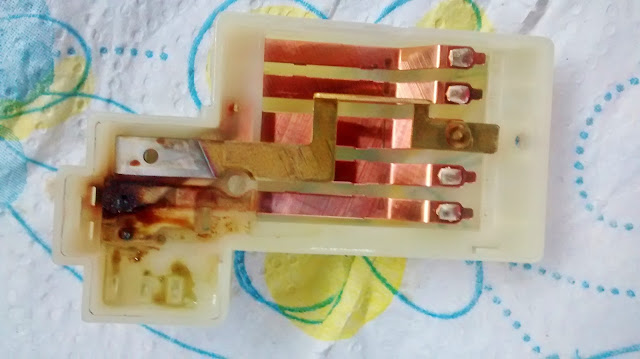 I cleaned the contacts with special electrical cleaner and q-tips. Easy peasy. Then, I realized that I needed apply some more dielectric grease on the contacts. I’ve got a lot of weird and wonderful potions on this boat, but no dielectric grease. So, back I went to ask Bruce to lend me some. I knew he’d have some. He has everything. I think we’re going to stalk them (I mean buddy boat with them) out on the water. They’re the boat you want to be next to when something on yours breaks. 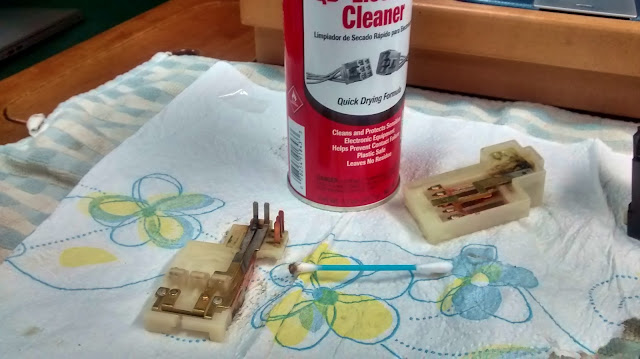 After putting on the dielectric grease it was time to reassemble everything. I basically worked backwards, screwed everything back together and put the newly cleaned and greased up headlight switch back in the car. Then, I cleaned up down below on the boat. That’s when I found some extra screws. Darn. So, I took things back apart, put the screws in where they belong and told my inner Godzilla he could have the rest of the week off.

So, there you go – Godzilla, tiaras and #blatantbrag all woven into an odd little tale of amateur auto repair.

What are you proud of? What’s your biggest achievement? Go on, give us some #blatantbrag.