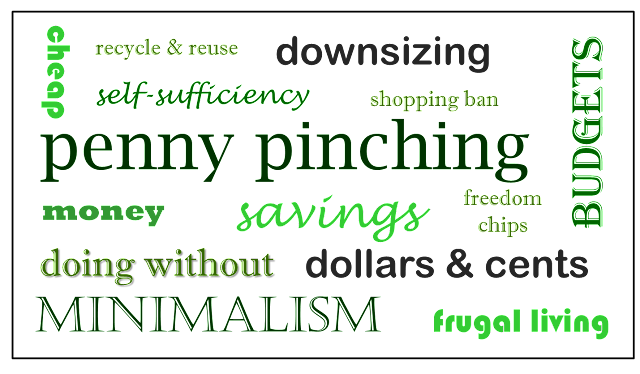 Could you go without shopping for non-essentials for an entire year? Could you refuse to buy anything new, instead only reusing what you already have or buying previously used items? Could you survive on $126 a month for groceries? How extreme could you go when it comes to penny pinching?

Maybe you’re saying to yourself, “But, I don’t need to pinch pennies or track my spending. I’ve got enough money to pay for everything I want and save for the future.”  If that’s the case, well done – that’s awesome! But, not everyone is in that position. Perhaps they’ve got overwhelming debt they need to get out from under. Or, they’ve got enough money to cover their monthly expenses, but don’t have any savings to cushion the financial blow that a job loss, serious illness or other unforeseen event might deliver. Or, they may even want to chuck it all in and go off adventuring – to experience life while they still have their health, energy and freedom.

Those are the types of people who might need to pinch their pennies. People like us. After many years working in corporate la-la land, making a decent salary and generally enjoying my work, it was time for a change. Scott felt the same way – running his own business was great, but he wanted to explore the world now, rather than wait until it was too late. So, we took stock of our financial situation and starting pinching pennies so that we could go adventuring sooner rather than later.

We had both seen too many people whose lives had been cut short long before they should have, as well as people who had lots of things, but weren’t really fulfilled by them. That wasn’t going to be us.

There are a number of ways you can pinch pennies. One of the easiest ways is to stop buying stuff. That’s what Cait at Blonde on a Budget is doing. She’s in the middle of a two year shopping ban and, except for things like groceries, kitchen supplies, cleaning products, toiletries and a few other items, she has committed to not buying anything new. Her shopping ban has enabled her to increase her savings, kick bad shopping habits and develop a more conscious consumer mindset.

Katy’s approach at The Non-Consumer Advocate is to use it up, wear it out, make do or do without. Katy isn’t ashamed to pick through free piles and reuse what others throw away. Her family’s frugal lifestyle helps them pinch their pennies for what’s important – like putting their children through university.

Taking on a shopping ban or choosing to do your shopping at Goodwill instead of Neiman Marcus is one way to pinch pennies, but it isn’t always enough. For some folks, it’s about downsizing and taking a more minimalist approach to your life. What possessions do you really need? What things really make you happy? What can you get rid of? For some, downsizing is dictated by the type of life they want to lead and the adventures they want to go off on. What can you really fit on a sailboat, RV or in a backpack?

When Scott and I decided to chuck it all in, instead of buying new clothes and knick-knacks, I started selling what we already had or giving it away to charity shops. You can find tons of other examples of folks who are getting ready to set off adventuring who are in the midst of doing the same thing. My bloggy pals Melissa at Little Cunning Plan and Cheryl of Mid-Life Cruising are great examples of this. They’ve been downsizing like crazy. It’s definitely painful at times, but they have their eyes on a bigger prize.

Now that we’ve all briskly set off down the path of 2016 (yes it’s the end of January already), I decided to have a look back at our expenses for 2015 and see if there were areas where we could pinch some more pennies. To be honest, I didn’t find too much else to pinch. Or rather, I didn’t find too much else I wanted to pinch. If I had to, I could cut costs some more, but I’m generally okay with our expenditure. (You can see details of what we spend on this page.)

For example, on average we probably spend about $100 a month for the two of us on entertainment which includes going out to eat, takeaway food, movies, going to events like the rodeo and fair, books and the occasional lottery ticket. That seems pretty reasonable to me. There are enough “outings” and treats to keep me entertained without breaking the bank. The other area I thought we might be able to cut back on is clothes, but we only spent $211 in that category last year.

About the only area we really spend money on these days is our boat and she’s not cheap. We knew when we bought her that there would be a number of things we would need to purchase for her and upgrades we would have to make. That’s just the way it is with boats – they cost you money. We do however prioritize what we spend on her and look for bargains when we can.

I did find one area where I could possibly trim some fat. And it might just trim some fat from me as well. That’s our grocery budget. I’ve been averaging about $230 a month on groceries just for me while Scott has been working overseas. Granted, a fair bit of that spend has been in building up our food stores, but I bet I could cut that back a bit. When I read how people in the States on the Supplemental Nutritional Assistance Program (“Food Stamps”) get only $126 a month for food, I have to say I was a bit dubious that it was even possible But then I talked to some friends of mine who spend around $120 a month per person on groceries and their tab also includes things like shaving cream and kitchen supplies, so I guess I can do a bit better than $230 a month.

It will be a bit of a personal challenge for me during February – how creative can I get with my meal plan on a budget? How many pennies can I pinch over the course of 28 days? I'll let you know.

What about you - are you a penny pincher? If so, what are your tips and tricks? And just because I'm nosy, how much do you spend a month on food?

Linked up with the Blogger's Pit Stop
Posted by The Cynical Sailor at 1:00 AM