I went on an outing yesterday to the South Florida Fair in West Palm Beach. Yes, an outing. Life can be rather quiet here at Indiantown Marina, so I get rather excited when I get to go on an outing to someplace other than Walmart. I’m kind of like a puppy dog who wags its tail enthusiastically, jumps around excitedly and pees a little on the floor whenever someone says, “Want to go for a walk?”

When a friend of mine asked me if I wanted to go for an outing to the fair, I wagged my imaginary tail enthusiastically and jumped up and down screaming, “Yes! Let’s go to the fair!” When he told me that he had a free ticket for me, I started running around in circles with joy. A free outing to the fair. What could be better? By the way, let’s just be clear – unlike a puppy dog, and despite my excitement, there was no peeing on the floor. Although, there are times that I wish I had a tail. I bet some of you do too.

I remember going to the county fair as a child. There were all sorts of farm animals to look at, greasy and sugary treats to eat, games of “chance” (chance being code for “we’ll take your allowance money and maybe give you a goldfish or a tacky stuffed animal in exchange”), rides that would make you a bit sick because you ate one too many corn dogs beforehand, and bands who were either dreaming of one day making it big or who had once been big but were now bitterly playing the county fair circuit and hoping for a comeback.

To be honest, I wasn’t sure what to expect from a fair in Florida. Surely, it would be different than the fairs I experienced growing up in Ohio. After all, West Palm Beach is a city on the East Coast, not some hicksville town in the Midwest. Turns out, I had nothing to fear. My friend promised me that there would be pig races at the fair. I guess even retired snowbirds like to see farm animals doing stupid things while they're sitting outside among the palm trees.

You’ve probably heard that pigs are smart. I can vouch for it. Do you know why pigs agree to run around a track for the amusement of humans? It’s because the winner gets an Oreo cookie. Even pigs are piggy. They like cookies so much they’ll race for them. Heck, I might even run a race for an Oreo cookie, provided it was a short race. There’s a limit to how much energy I’ll expend for chocolate. 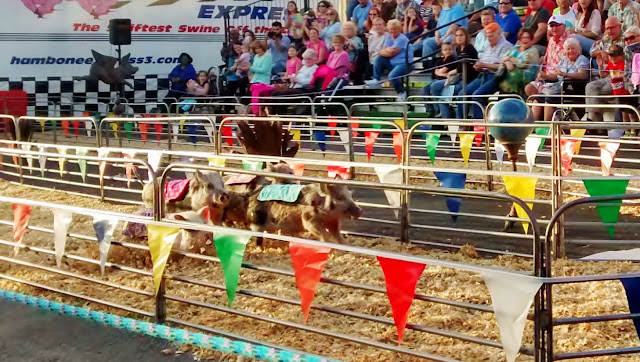 We checked out some of the other animals at the fair. There were the usual cows, goats and sheep, but there were also some animals I don’t ever recall seeing at the fair when I was a kid. Like a zebra, camels, alpacas and some sort of South American rodent like thing which was cute as a button. Despite the more “exotic” animals on show, the goats were my favorite. I want one, but I suspect convincing Scott that we need a goat on board will be more of an uphill battle than my current let’s get a boat cat campaign. 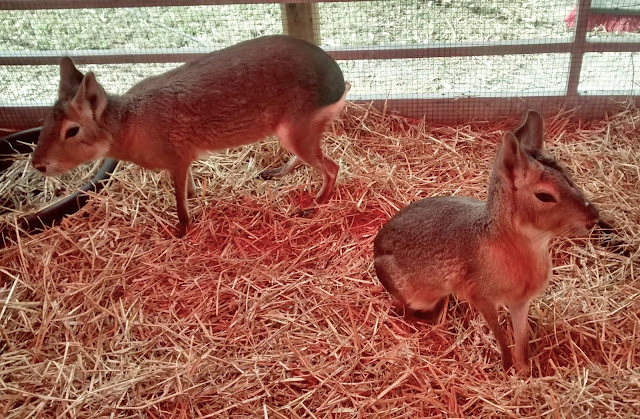 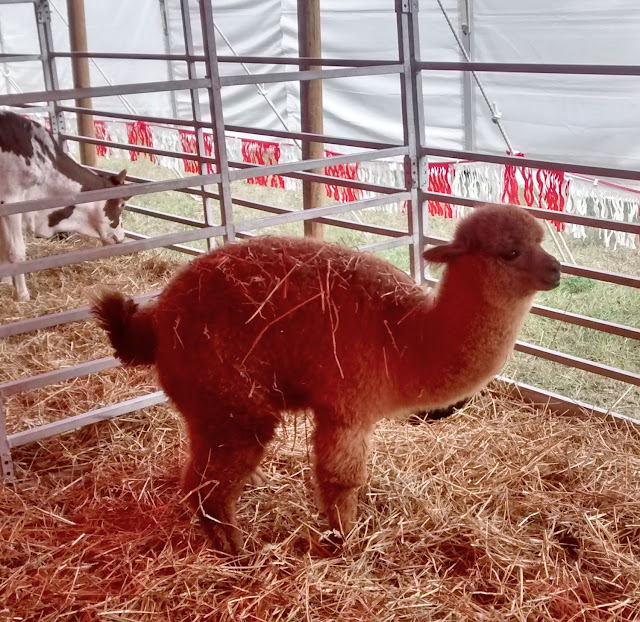 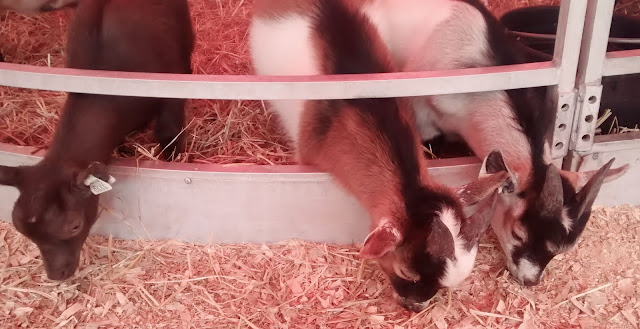 There was a whole tent dedicated to rabbits. When I saw that on the fair program, I wagged my imaginary tail again and jumped up and down screaming, “Let’s go to the rabbit tent!” So many rabbits all in one tent. I had no idea that there was so much variety in the rabbit world. I even saw one that looked like a Siamese cat. I kind of want a rabbit now too. To be honest, I actually wanted to free them all from their cages. I can't imagine it's comfortable sleeping on a wire floor without any padding. If Scott doesn’t get back to Florida soon, there's a strong possibility that I'm going to turn Tickety Boo into a modern-day Noah’s Ark. 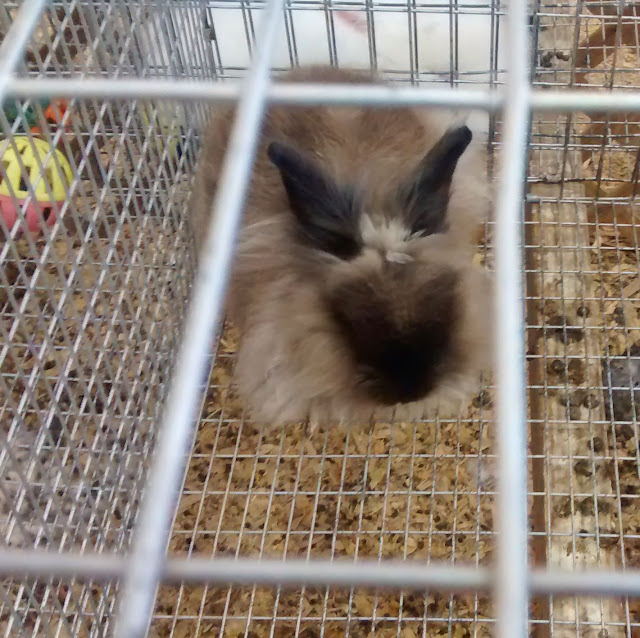 After getting our animal fix, we headed off to see all the shows. It kind of reminded me of being on a cruise ship, but on land. There were singers, bands, magic shows etc. to choose from. First, we saw a really cheesy band led by one of those guys who is big on audience participation. I’m always the person who cringes in the back when those types of performers hop down from the stage and start wandering through the audience. Please don’t pick on me. Please don’t turn me into the butt of your corny joke. Fortunately, there were plenty of snowbirds who were happy for a bit of limelight instead. They actually waved their hands in a bid to be picked. Go figure.

Then it was off to see the Celine Dion impersonator. I don’t really get impersonators. This lady certainly could sing and she can pull off a short sparkly dress and high heels, so why does she spend her time pretending to be someone she isn’t? Maybe there’s more money in doing tribute acts than getting gigs as yourself. Well, I guess it works for her. The audience loved her act and I didn’t see as many people walk out on her as I did in the earlier show with the cheesy band.

Next up was the ice show. Yes, an ice show. I guess this is what makes county fairs in Ohio different from fairs in Florida. We had 4-H competitions and prizes for the best strawberry preserves, while in Florida, they get the glitz and glamor of ice skaters doing twirls and jumps. Fortunately, none of the girls got hurt while their partners were swinging them around in circles with their heads just inches away from the ice. Part of me always wants to yell out, “Honey, wear a helmet! You could get hurt doing that. And, while you’re at it, put a sweater on. It’s cold out there on the ice.”

No fair could be complete without greasy food – like Elephant Ears. I haven’t had one of these in years. They’re basically a piece of flat dough that is fried in a ton of oil and then sprinkled with an obscene amount of powdered sugar. Sadly, the one I had wasn’t as good as those I remember from my childhood, but I still managed to scarf down a good chunk of it. 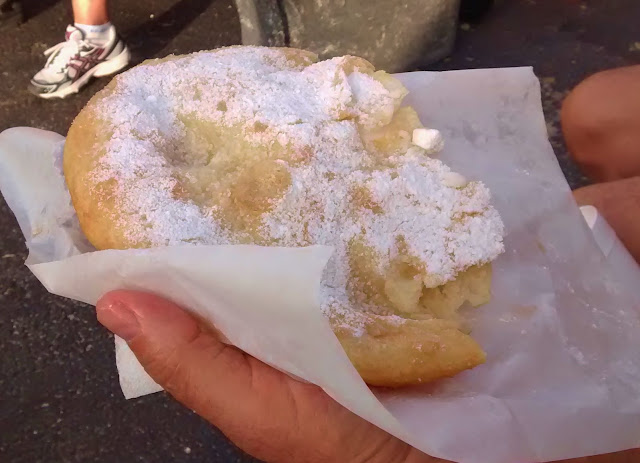 Well, that’s the news from Indiantown, Florida. It’s pouring down buckets today, so I think I’ll work on an indoor project. Like converting our v-berth into our very own petting zoo complete with goats, rabbits and maybe an alpaca or two.

Have you had an exciting outing lately? What did you get up to?

Linked up with Weekend Travel Inspiration

Posted by The Cynical Sailor at 8:41 AM