Nancy Drew Is A Total Slacker & Other Random Nonsense

Over the past few weeks, from time to time, I've been woken up in the middle of the night by a very loud and very insistent noise which sounds something like this:

The first time it happened I had been sleeping in the saloon. This was during the period of Nancy Drew's investigations of the Case of the Slowly Sinking Ship and I wanted to be able to hear the bilge pump if it went off again, something I can't really hear back in the aft cabin.

By the way, for those of you who were wondering, Nancy Drew is actually a real slacker. I know we all thought she was a crack sleuth, able to solve any mystery quickly and decisively, all without getting a hair out of place or spilling anything on her angora sweater set. Turns out she's nothing like what you think. Talk about having a great PR team. They make sure photos of Nancy in stained sweat pants eating potato chips, drinking cheap beer from a can and lounging in front of the telly never make it into the magazines. But, that's how she spends most of her days. Nancy hasn't been able to put the remote down long enough to figure out what the heck happened on that day of the mysterious leak. I think I'm going to have to call in the Hardy Boys soon. They seem like responsible young lads.

Okay, enough of that, let's get back to the issue at hand. When the annoying BEEP! BEEP! BEEP! first went off, I thought to myself, "What the heck's with the beeping sound. Just what I need, another problem to worry about. Where's Nancy when you need her." Then I checked the bilge. Dry as a piece of melba toast. And the beeping stopped.

So I promptly forgot about it.

Then it happened the next night. I was still sleeping in the saloon just in case the leak came back. By the time I untangled myself from my blanket to investigate it stopped. Checked the bilge. Dry like beef jerky left in a hot car all day.

The third night I didn't hear anything, but I did have a strange dream about aliens invading Earth and using some sort of ray guns which made a strange beeping noise.

After a few nights, I moved back into the aft cabin.  Occasionally, I would hear beeping. Always at midnight and always for one minute. It was perplexing. I called Nancy to see if she had any idea what was going on, but her phone went straight to voice mail. I'm pretty sure she was watching a Keeping up with the Kardashians marathon on the telly. Honestly, that girl. Such a slacker.

Then one night, I happened to be up just before midnight (which is a rare occurance for me) and out in the galley getting some water when that annoying beeping started again. I looked all over to figure out what was going on and then it dawned on me. It was our SSB receiver. Yes, this thing. 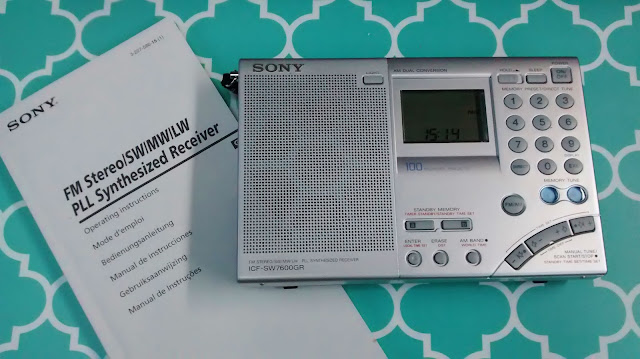 Looks like somebody thought it would be funny to program an alarm on it to go off at midnight. Every. Single. Night. My money's on that Nancy girl. She looks so sweet and innocent in her pearls and angora sweater set that wears in all of those photo shoots, but she isn't. She swears like a sailor and is constantly pulling pranks. It's a good thing her father is loaded, otherwise no one would be friends with her for very long. And she's a rubbish detective to top it all off.

Well, anyway, I guess we can all celebrate. At least one mystery is solved - the Case of the Annoying Beep is now officially closed.

And in completely unrelated news, hence the blog post title Other Random Nonsense, remember how I told you that another Moody 346 owner came to visit me a few days ago? There were only 254 Moody 346 sailboats made between 1987 and 1990 and you normally don't find too many of them in North America. They're very popular in the UK and you'll see them in European waters, but it's pretty rare to spot one over in this neck of the woods.

So, I find it kind of bizarre that there happens to be another Moody 346 stored long-term at Indiantown Marina. What are the chances? This one is the bilge keel version and, for all of you boat nerds out there, here's what that version looks like. 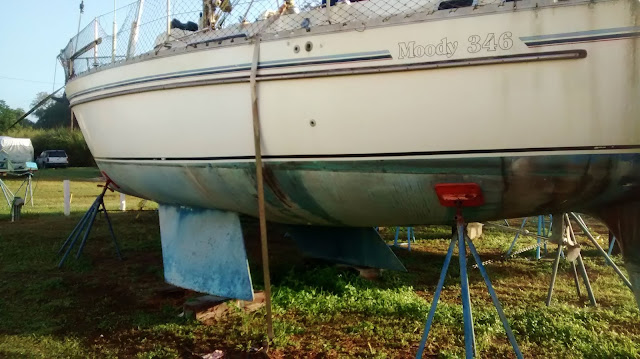 I like the lettering on our boat better which probably gives you some insight into how shallow I am. 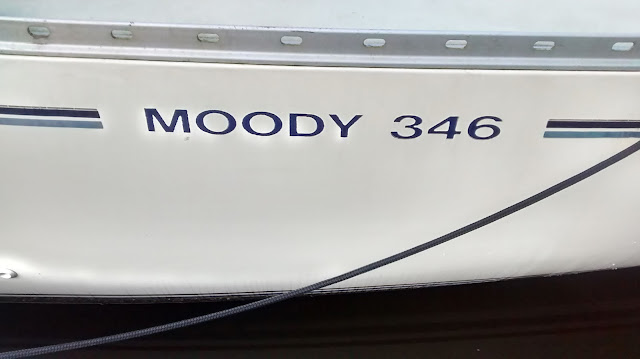 If you're interested in what a Moody 346 looks like with a fin keel, or are just one of those people that enjoys reading boat specs, then you should have a look at our boat page here.

And in the most random of nonsense, I had lunch with a friend at the Dairy Queen in Okeechobee today. I made the mistake of going online to see how many calories it was - over 900! I've seen Nancy at the drive through at Dairy Queen before picking up massive orders of fries and hot fudge sundaes. How in the world does she manage to stay so trim? I'm thinking there must be some liposuction going on. It's the only explanation I can think of. It's just a matter of time before she gets her own reality show. Oy vey.

What kind of random nonsense has been happening in your life lately?

Thanks for stopping by our blog - we love it when people come to visit! We're also on Facebook - we'd love for you to pop by and say hi!
Posted by The Cynical Sailor at 1:12 PM