I went on a tipping party the other day. Not kind where you run around randomly tipping waiters, baristas, hairdressers or even cows, but the kind where you tip a sailboat.

Tipping a sailboat might like a strange concept to you. Perhaps as strange as tipping cows (a favorite pastime of some boys that I knew in high school). However, sailboats get tippy naturally when the wind is blowing from the right direction. They're meant to heel over from side to side. I don't always like it when our boat gets super tippy - sometimes it feels like it's going to tip all the way over. Scott assures me that the laws of physics mean that this won't happen. My eyes just glaze over when he starts talking about this kind of stuff.

Sometimes, you have to tip your sailboat without the help of your sails and wind. Like when your boat is 50' tall and you have to go under a railway bridge which is 49' tall. The only way to make it through is to tip your boat so that you can squeeze under.

That's what my friends Greg and Duwan on S/V Blue Wing did the other day. Here's a picture of them as they left Indiantown Marina to make their way down the Okeechobee Waterway. Say hi! 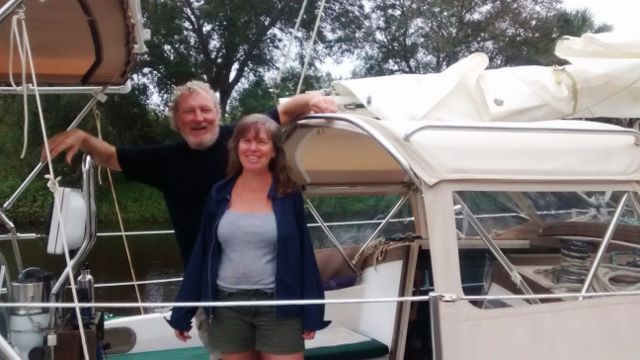 They're headed off cruising to Mexico, Belize and Honduras this year, which means they wanted to make their way to the Gulf Coast of Florida to stage themselves for the passage. So, they had to head west when they left Indiantown Marina to go down the St Lucie Canal to Lake Okeechobee and then onward to Ft. Meyers. It's a great idea - head through the middle of Florida from one coast to the other, rather than go down and around the bottom of the state. Only one problem - that pesky railway bridge.

Most folks call upon the services of a chap named Billy to help them tip their boat so that they can squeeze under. He brings his skiff out to your boat, ties up 55 gallon barrels to one side of your boat, fills them up with river water until your boat is heeled over sufficiently to make it through. When my friends Matt and Jessica delivered their old boat to her new owner on the Gulf Coast, they had Billy tip their boat. You can see some great pictures of the drums being filled up and S/V Serendipity tipped over at 17 degrees on their blog.

Duwan texted me once they reached the railway bridge and were starting the tipping process. I headed out with my pals, Jane, Charlie and Doc to watch the show. If you're going to have a party, invite these guys along. They're so much fun to hang out with! Here they are goofing off on the railway bridge. The bridge that is clearly signposted - DO NOT TRESPASS. I don't think they meant us though. 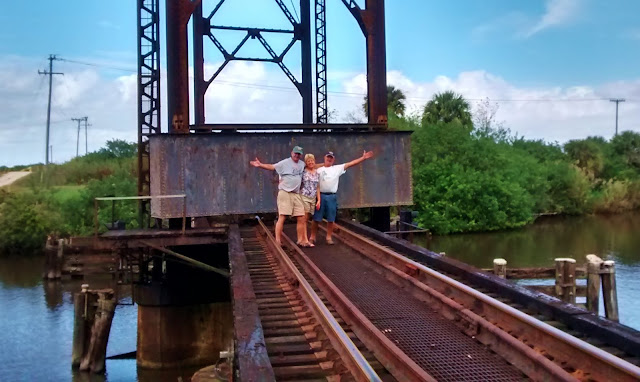 You kind of have to walk onto the bridge so that you can see the action. Here's S/V Blue Wing anchored by the bridge getting ready to hoist Duwan up the mast. I think Jane took this picture. 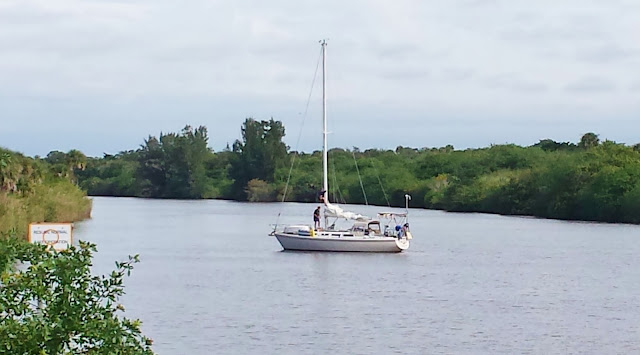 We ended up driving around to the other side of the canal to try to get a better view. I think the same people that put up the DO NOT TRESPASS signs were the ones who thought it was a good idea to put locked gates on the service road on the north side of the canal. We figured the gates didn't apply to us either, but since we couldn't figure out how to pick the lock, we ended up walking down to the bridge.

It was a lot further than we thought. Good thing we brought refreshments and snacks. Here's a picture of Charlie modeling our box of spicy pretzels as a train went over the bridge. 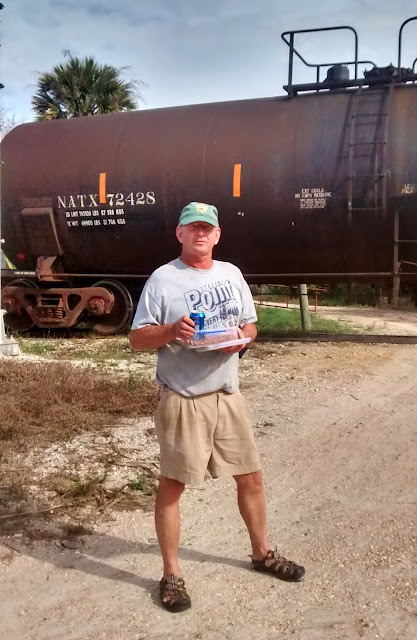 After the train went by, we crossed the tracks. Some guy in a pickup truck stopped and asked us what we were doing. We said we were there to watch a sailboat go under the bridge. Not sure he hears that everyday. He told us not to cross the railway bridge. I suspect he's the same guy that puts up the DO NOT TRESPASS signs and has a key to the locked gate.

Other friends of Greg and Duwan showed up on the other side of the bridge for the party. That's what it looks like when the bridge is going up and before the barriers go down. You wouldn't want to accidentally fall in the canal. Unless you like alligators, that is. 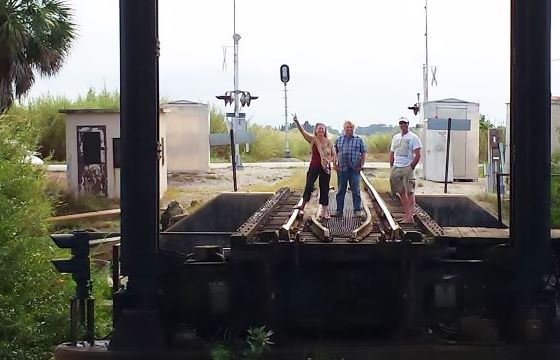 Eventually, Duwan got up the mast so that she could attach some line to the top. They needed the line so that they could see if their boat was heeled over enough to make it under the bridge. Here she is. Brave girl. I'm not sure I want to get hoisted to the top of our mast. 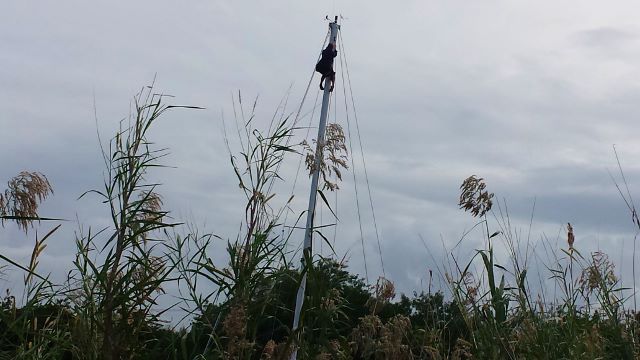 By this point, we had run out of refreshments and snacks and it looked like it was going to be a while until they tipped, so we headed back to Indiantown Marina. On the way back, we stopped at the south side of the bridge to have a look and ran into even more folks out for the party.

Fortunately, some of Greg and Duwan's friends managed to get a video of them tipping and going under the bridge. They came over later that night to show it to me and it was nerve wracking. And I wasn't even on the boat when they went under. They just made it through. Yay!

You might be able to access the video from their Facebook page here. If you can access it, it's well worth a look. Greg and Duwan hiked out their spinnaker pole, attached their hard-sided dinghy and filled it up with water. Then, as they went through, Greg rode alongside in their inflatable dinghy and held on to the hard-sided dinghy so the water wouldn't spill out. Crazy, but effective.

Be sure to also check out Duwan's post from their perspective here.

It's probably something we would do to save a buck. What's the craziest thing you've done to save money?

Thanks for stopping by our blog - we love it when people come to visit! We're also on Facebook - we'd love for you to pop by and say hi!
Posted by The Cynical Sailor at 7:52 AM