Going For A Walk: Glasgow, Scotland {Or, So That's What Scott's Been Getting Up To}

While I've been hanging out on our boat Tickety Boo at Indiantown Marina in southern Florida, Scott's been in Scotland for the past few months finishing up some work commitments and tending to some other matters. Most days, he sits in front of the computer working away, but occasionally he gets out and goes for a walk. Usually, his walks take him around the local neighborhood, but he has managed to make it into Glasgow a couple of times in search of curry.

I love curry. The last time I had curry was on Christmas Day and I had to make it myself (it's our traditional Christmas dinner). The curry Scott gets in Glasgow is a gazillion times better! I'd love to show you a picture of his meal, but he keeps forgetting to take one. I can't say that I blame him. If someone put a chicken chili dosa and lamb karahi in front of me, I'd forget my camera, the people I was with, pretty much everything and just snarf it down as fast as I could. You'll just have to take my word for it - delicious. If you ever find yourself in Glasgow, get yourself to Mother India Cafe. You won't regret it. Don't forget to take a picture.

While I can't show you curry pictures, I can show you some snaps from what Scott got up to in Glasgow on his walks.

Before you can go for a walk though, you have to get to Glasgow. From where Scott's staying, it involves a bus and a train. This is the lower platform at Glasgow's Central Station. I remember this platform well from my working days. It's madness during rush hour - you have to make your way around prams, people with enormous umbrellas and dodgy kids who look like they had one too many pints of ale and might throw up all over your shoes at any minute. 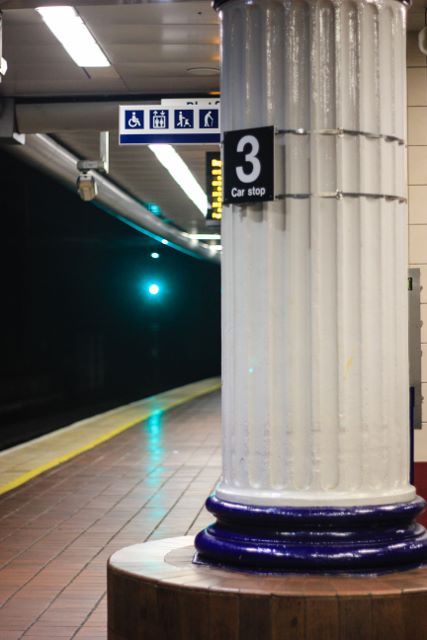 This is the upper level of Central Station. I love train stations. I'm always curious where people are going to and where they're coming from. Like the two folks in the picture with big backpacks. Are they heading up to northern Scotland or maybe making their way down to London? 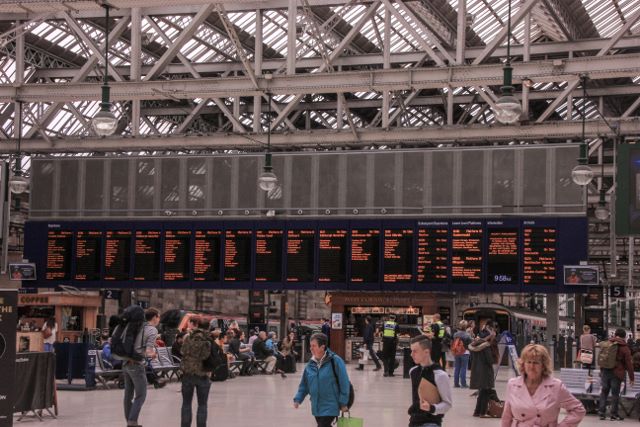 It looks like Scott made his way up from the train station to Buchanan Street. This is one of the main shopping districts in Glasgow. Scott's not really a big shopper so I'm pretty sure he didn't visit any of the stores I used to haunt when I lived there. 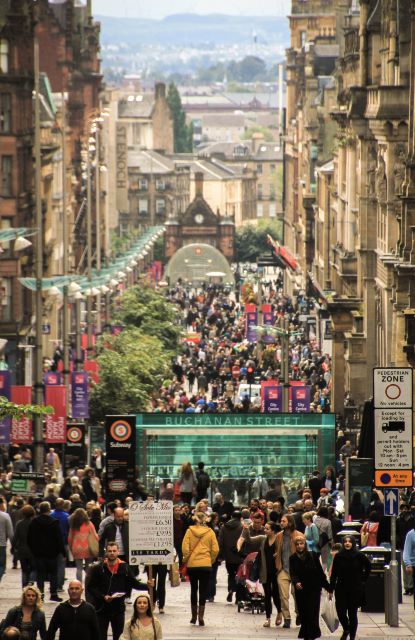 Glasgow has an underground subway, kind of like the Tube in London. Okay, it's really nothing like the Tube. Glasgow's underground is teeny-tiny (6.5 miles long) and runs in a circle around the city. It's sometimes known as Clockwork Orange because of its orange trains. I'm guessing Scott took the subway over to the West End of Glasgow in search of curry. Scott visited one of his favorite pubs in the West End - The Doublet. He likes it because they don't play music. I don't know about you, but I hate it when I go to a pub or restaurant and they're blaring music and I can't hear myself or the folks I'm with. And it's usually really bad music. Do you know how to tell if you're getting old? You complain about loud music in public places and the oldies station on the radio plays tunes from when you were in high school. 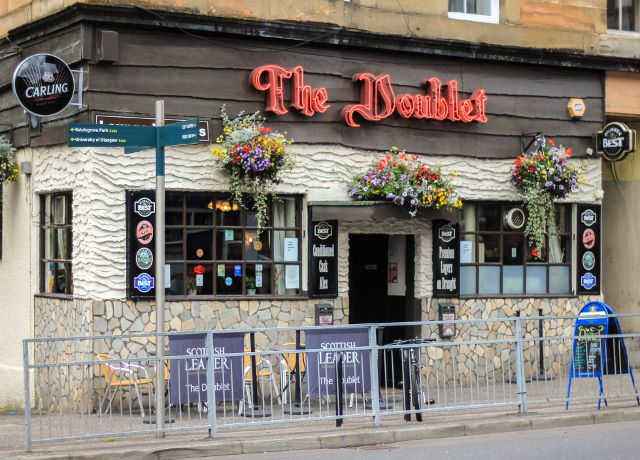 One of the highlights of the West End is the Kelvingrove Art Gallery & Museum. We used to live in the West End and this was one of our favorite places to while away a rainy weekend afternoon. 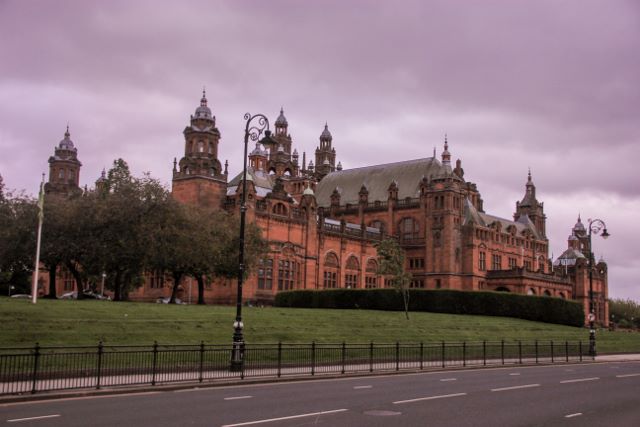 The Kelvingrove has some amazing works of art. Scott likes this one - Raoul Dufy's The Jetties of Trouville-Deauville. I used to have a red coat like the lady in the painting. I wonder whatever happened to it? 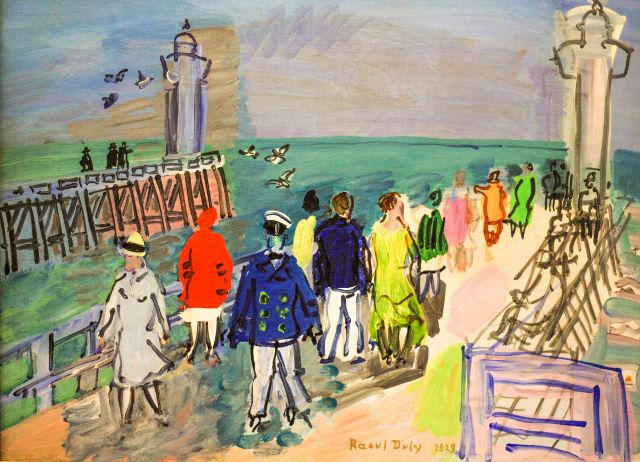 There's another museum nearby at Glasgow University - the Hunterian. Scott swears that we've never been there. Personally, I think he's wrong, which is a bit strange as I usually remember nothing and he remembers every single place we've been, but I'm positive we've been there. One of us is mistaken. I'd prefer to think that it's Scott, but chances are it's probably me. 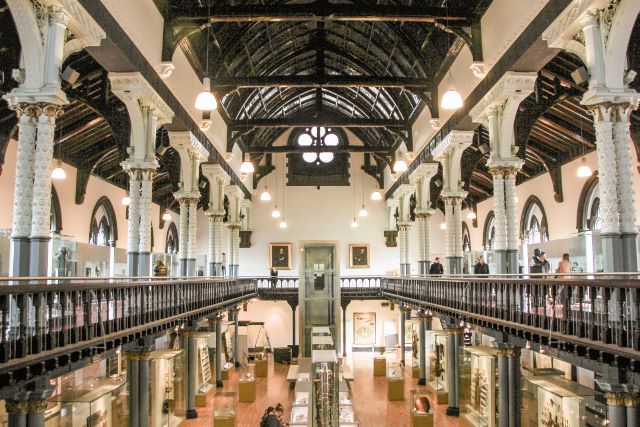 Here's what the university looks like. Can you imagine going to a place like this for college? I'd always be expecting Harry Potter to sit down next to me in class. 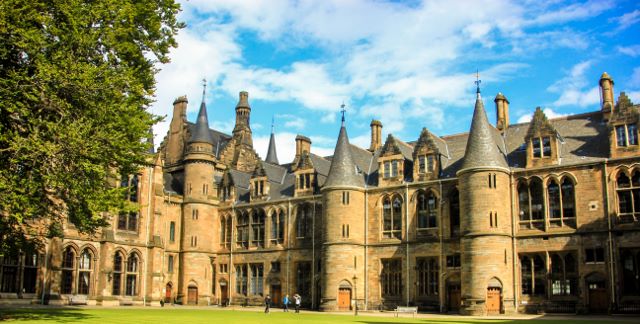 You're probably wondering why there hasn't been a picture of guys in kilts yet. Here you go. Looks like they're off to some sort of match. 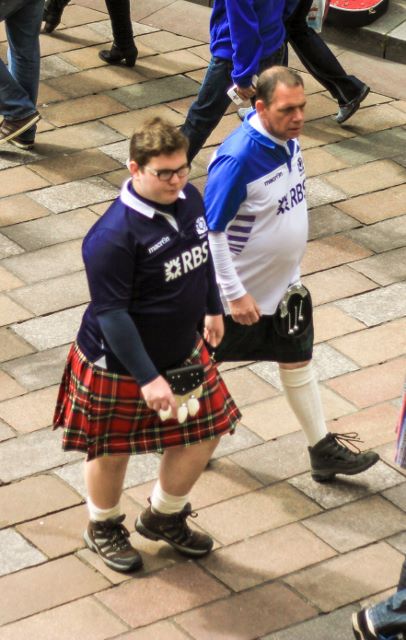 Ashton Lane was also one of our hangouts back in our West End days. There's a well known restaurant there - the Ubiquitous Chip. We never ate in the restaurant (too pricey for us), but we would get lunch and a pint at the bar upstairs occasionally. Lots of other cute cafes, pubs and restaurants along the lane. 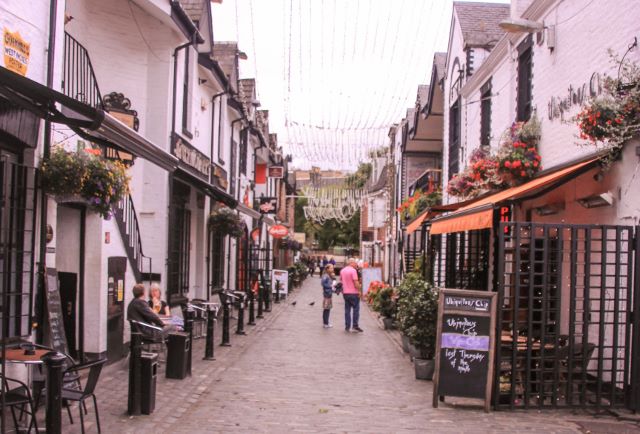 Scott likes to poke around grungy alleys and take pictures. Here's a couple which I think were taken near the Barras Market. A lot of stuff seems to "fall off lorries" and end up for sale at this market. 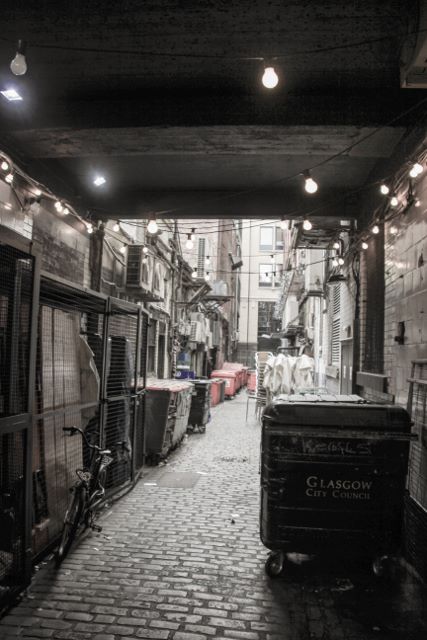 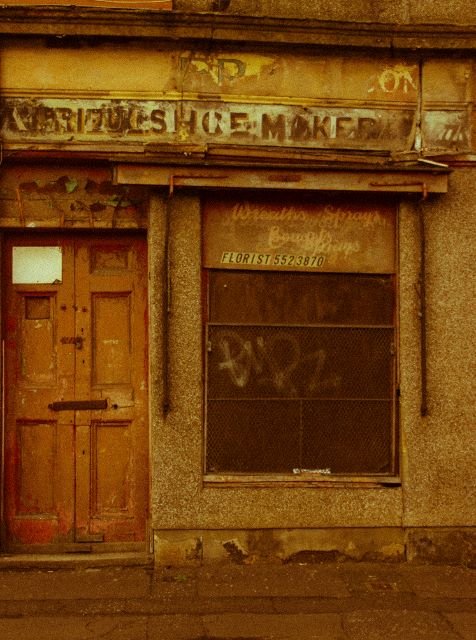 Halloween is coming. Well, actually it's almost two months away, but you can buy all of your Halloween candy and costumes at Walmart already. It's crazy how they build up to holidays in the States months ahead of time and try to persuade you to buy all sorts of useless stuff. You know what I like about Thanksgiving? It's one of the least commercialized holidays.

So how does this relate to Glasgow? The spooky pictures Scott took of the necropolis (aka the city of the dead) reminded me of Halloween. That and my sister sending me emails telling me that the pumpkin shaped Reese's candy is now on sale. See the smokestacks in the background of the second photo? That's the nearby crematorium. Creepy. 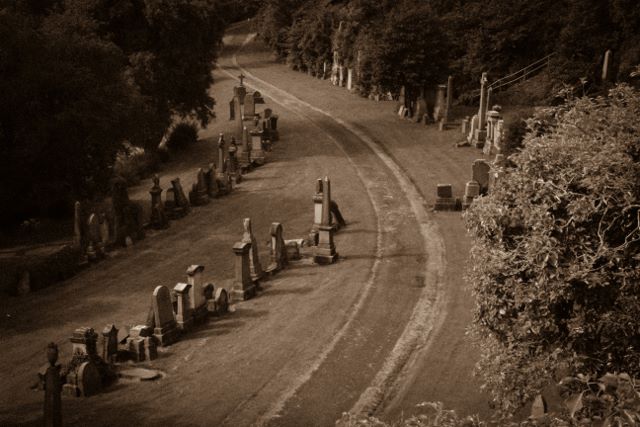 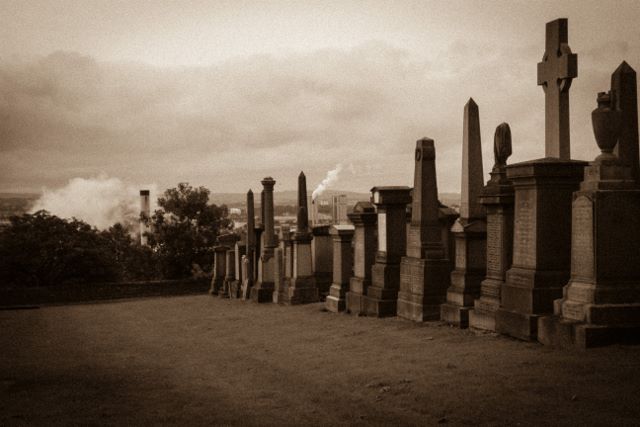 Scott must have been in a black and white kind of mood. Here's a shot of the Glasgow Cathedral. This is what I loved about living in Scotland and traveling around Europe - history smack dab everywhere you go, often right next to hideous modern buildings. 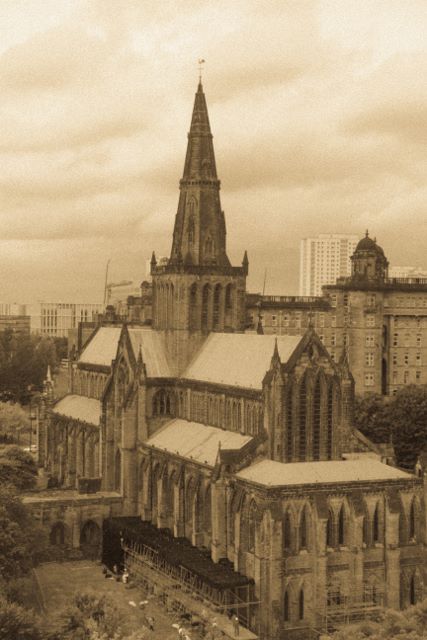 And one final shot of Glasgow Central Station as Scott made his way back home. 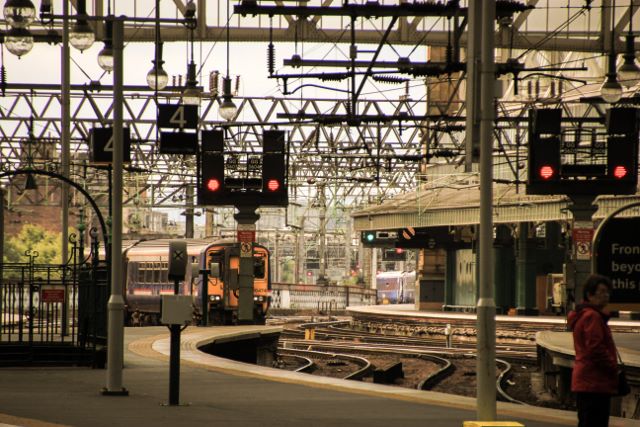