Dealing With Dead Bodies On A Boat

You've probably picked up on the fact that I'm a bit of a worrier. I worry about the alligator that swims near our boat in the marina. Is he going to try to get onboard one day and make himself at home? I just made green slipcovers for our settees. In hindsight this probably wasn't a brilliant move on my part. Perfect camouflage for an alligator. He can just lurk there hiding until just the right moment and then pounce.

I worry about lightening striking our boat, which isn't an unreasonable fear given that 3.3 out of every 1,000 boats in Florida get struck. Do you know what's fun? Sitting in your boat during a thunderstorm watching the lightening crackle overhead and wishing you didn't have a 42 ft/12.8 m tall metal mast sticking up in the air waving to the lightening bolts saying, "Over here! Look at me! Look how shiny I am!" Stupid mast. It's just asking for trouble.

I worry that all of the cocoa trees are going to die off and we all know what that would mean - no more chocolate!! There's currently a global chocolate shortage due in part to a horrible fungus attacking the cocoa trees. That is some serious stuff folks. This is the type of thing that keeps me up at night. Only Willie Wonka can save us now.

Lately though, I've been worrying about what I'm going to do with all the dead bodies on our boat. Probably need a bit of clarification here - there aren't currently any dead bodies on our boat, unless you count all the insects I squash on a regular basis. The dead insects are easy to deal with - just wipe them up and flush them down the drain. It's the dead bodies of the human variety that I'm worried about. What the heck am I going to do with them? They're much more awkward to deal with.

Okay, before you start thinking to yourself, "There she goes again, worrying about the oddest things that aren't ever going to happen," let me just tell you - this kind of thing does happen. Okay, maybe I don't have examples of people dying onboard, but I do know other people worry about this too. Living on a boat is all about preparation. I'm making sure we have enough canned tomatoes to survive the end times and I'm thinking through all sorts of other emergency scenarios - like dealing with dead bodies.

So how did I come to add this whole dead body thing onto my already long list of Very Important Things to Worry About? It all started with our lazarette. A lazarette is basically a big storage locker. I've been meaning to clean it out - it's one of the items on my list of Very Uninteresting Boat Projects. But like most things on that list, I hadn't gotten around to it. 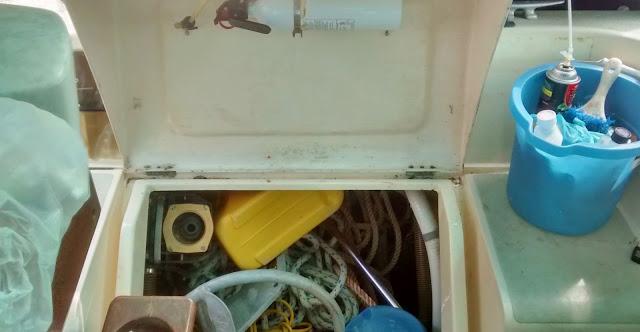 Then a wall in our head (aka bathroom) started to crack. There had always been a tiny crack since we bought the boat, but one day, as if by some sort of X-Files type magic, it started to expand. I put a piece of duct tape on the wall to monitor its progress. It made its way down to the duct tape and kept going. Nothing was stopping this crack. I was clueless about what was causing it. So, I ignored it.

A couple days later, I noticed some disgusting brownish-yellow fluid seeping down the wall. If you saw something like this happen in the bathroom in your house on land, you might not get too grossed out. But here's what makes living on a boat or in an RV so interesting (and by interesting, I mean gross) - you basically carry around a large box to hold your pee and poo in. Folks usually call it a black water tank or a holding tank, but let's face it, it's basically a pee and poo box. I'm going to start to calling it a PPB. Makes it sound cuter than it is.

Guess what's in the lazarette right next to the head (aka bathroom). Yep, our PPB. So, imagine the thoughts that started to go through my head when I saw brownish-yellow grossness coming down the wall. I started to wonder if something was horribly wrong with our PPB and the hoses that connect to it.

Only one way to find out - check out the lazarette. 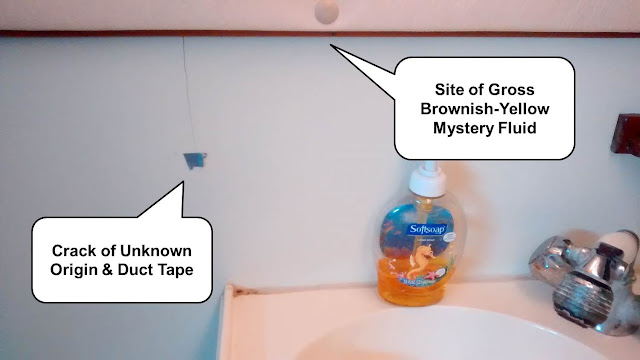 I unlocked our lazarette and had a peek inside. From what I could see, everything looked good with the PPB and hoses and there weren't any cracks on the fiberglass wall which buts up against the head/bathroom wall.

Those of you who are paying attention will note that I said, "from what I could see." That's because I only checked out how things looked from up top. I haven't yet descended into the depths of the lazarette to really see what's what.

Four reasons why I haven't tacked this Very Uninteresting Boat Project yet:

When Scott "brainwashed" me into becoming a full-time cruiser, I have to tell you these types of things were not mentioned in the glossy brochure he gave me.

Seriously, the lazarette is probably like 5 ft/1.5 m deep. I'm 5 ft/1.5 m tall. The lizards running around in the marina have more upper body strength than I do. I'm stumped as to how I'm going to hoist myself out of the lazarette.

This kind of thing happens. Scott knows someone who got trapped in his lazarette for hours. As if I didn't have enough to worry about, what with the alligators, lightening and chocolate shortage, now I have to worry about the lid accidentally closing, trapping me inside for days while I starve to death.

Do you fancy crawling down into a storage locker with a box full of pee and poo? I know I don't. Refer to point #1 above. 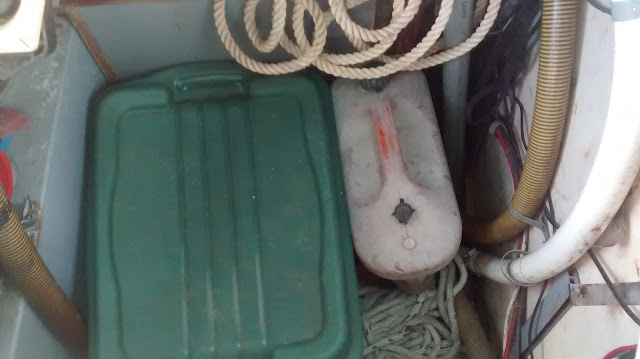 On the bright side, I have figured out where I'm going to store dead bodies on our boat. The lazarette is the perfect place to put them! It's big and roomy. It's out on deck (much more pleasant to store your dead bodies outside rather than down below in the cabin). I figure I can just roll the bodies down in there, close the lid and forget all about them.

You might possibly be wondering about why I might end up with all these dead bodies on my boat, but that's probably a story for another day. Let's just say that I don't have the best track record when it comes to accidental jibes. For you non-boaties, an accidental jibe is basically a huge sailing faux-pas where the boom swings wildly from one side of the boat to the other, potentially decapitating the unsuspecting.