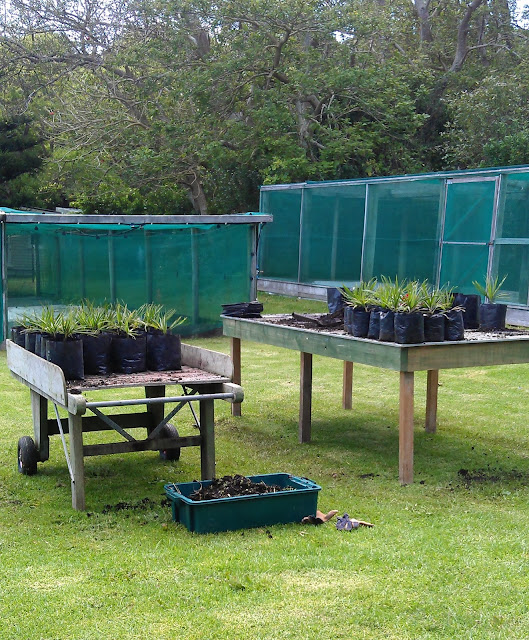 Motuora Island is an 80 hectare recreation reserve located about 5km off of Mahurangi Harbour. The island was farmed for over a hundred years and, as most of the original coastal forest and other native vegetation was cleared by Maori and European inhabitants, it is now mainly pasture. Today, the island is managed jointly by the Department of Conservation and the Motuora Restoration Society who are working to restore native flora and fauna by replanting the forest and introducing animals back onto Moturoa. Each year approximately 25,000 plants are grown and planted on the island, largely through volunteer effort. Most of the understory planting has been completed and work is now focused on infill and canopy planting, along with seed gathering, thinning out seedlings, weeding and general maintenance.

I was lucky enough to go out the island this weekend and volunteer. I spent some time repotting plants and shifted a lot of fence posts. I also got to see Kiwi ingenuity in action as everyone helped move a large plastic water tank (which had a crack in it and couldn't hold water anymore) to a new location so that it can be turned into a shed. We tipped it over on its side and then it was rolled down the path to its new site. It kind of reminded me of when Violet ate that chewing gum in Willie Wonka and turned into a giant human blueberry and the Oompa Loompas rolled her out of the room.

Motuora is one of the Hauraki Gulf's Treasure Islands, which is a conservation campaign to prevent the introduction of pests onto the islands. Moturoa is a great example of this and, despite the fact it was occupied and farmed for a long time, it does not have any rats, mice, stoats, ferrets, weasels, feral cats or other miscellaneous pests. This allows it to be used as a safe habitat for endangered species. The island has served as a creche for Northland brown kiwi birds and a number of animals have been released on the island including geckos, shore skinks, diving petrel chicks and wetapunga.

After our sausage sizzle and cuppa at lunch, one of the board members of the Motuora Restoration Society took us for a walk and showed us where the rangers and volunteers raised 70 Pycroft's petrel chicks. The birds were transferred from Red Mercury and fledged on Motuora with the hope that they will return to the island to breed after spending their first three years at sea. You can see some great pictures here of how they fed and weighed the chicks. Apparently they were fed a special diet of sardine smoothies - yum! We also walked up and had a look at the gannet colony. They have set up a bunch of gannet decoys along with speakers which play gannet calls in the hopes that this will attract gannets to nest on the island. Apparently, some of the real gannets are a bit confused and have paired up with the decoys rather than the kind of gannets they could actually have offspring with.


Given the importance of protecting theses animals and native plants, if you visit Motuora, there are a few things you should do to ensure it remains pest free.
Volunteering is a great way to see the island while helping out with the restoration efforts. You can also visit the island on your own and enjoy a picnic, walk, bird watching or swim off one of the sandy beaches. While there isn't much evidence of Maori occupation on the island, you can check out the pa site on the southwest end of the island. You can also stay overnight at either the campground or at the island's "bach" (Kiwi for cottage). Bookings required for either and you can find details on the DOC website. There is no ferry to the island, so you'll need to bring your own boat or arrange for a water taxi from Sandspit. (Note: It cost us NZ$20 for a round-trip ticket on the water taxi, but that may have been a special rate for the Motuora Restoration Society.)