Bodies In The Boatyard Now Available! 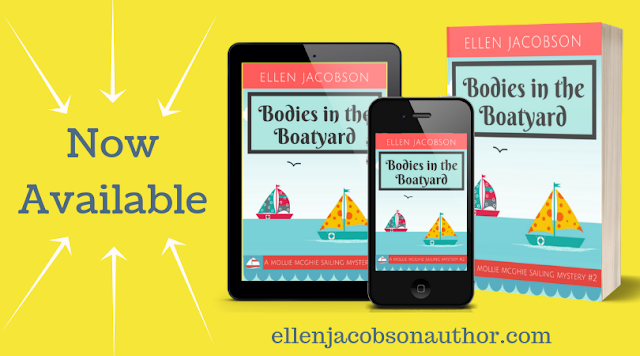 Bodies in the Boatyard is now available! This is the second book in the humorous and light-hearted Mollie McGhie cozy sailing mystery series. (If you're new to the series, start with Murder at the Marina.)

Remember when Scooter thought it was a great idea to get Mollie a dilapidated sailboat as an anniversary present? Well, now he has a new hare-brained scheme--sell their adorable seaside cottage and move on board. Mollie and their cat, Mrs. Moto, are less than impressed. Then, when someone gets murdered in the boatyard, things get even worse.

Selling your house and moving onto a rundown sailboat—not a dream come true. Finding dead bodies in the boatyard—a total nightmare.

Mollie McGhie loves her beachfront cottage. When her husband announces that he wants to sell the house, downsize, and move onto their dilapidated sailboat, she’s not impressed.

When the boat starts leaking, she secretly hopes it will sink. Instead, they haul her out of the water and into the boatyard. Fixing the boat up is bad enough, but when Mollie finds someone has been killed nearby, things get even worse.

Mollie takes matters into her own hands and investigates the mysterious death in the boatyard, along with her adorable feline companion, Mrs. Moto. While she searches for clues, she meets more of the quirky characters who live in the small Floridian town of Coconut Cove, learns about sea turtles, overcomes her fear of public speaking, and, of course, eats way too many sugary treats.

Can Mollie catch the killer before someone else ends up dead?

STAY UP-TO-DATE WITH MY FREE NEWSLETTER: Click here to sign up and stay in touch. You can expect occasional updates from me, typically about new releases and projects I’m currently working on, as well as snippets about life aboard our sailboat.