Today we're featuring the release of >>Death by Adverb<< by Rebecca Douglass. This is a delightful cozy mystery which I had the pleasure of reading (see below). Given the fact that I live on a sailboat, I really liked the cover. Although I do prefer my boats without dead bodies. Have a read below for more details about >>Death by Adverb<<, along with an excerpt. 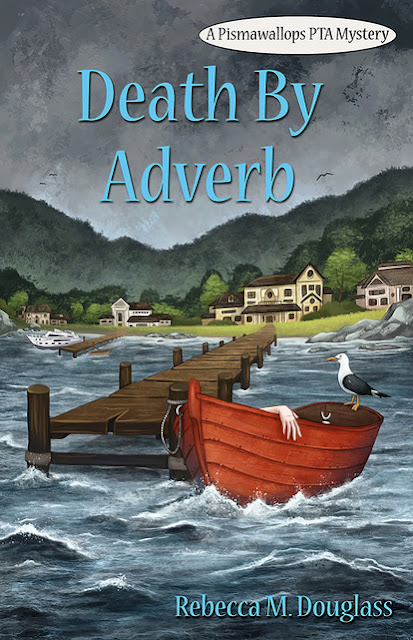 JJ MacGregor’s having a rotten summer. Her arm’s in a cast, her jeans are too tight, and her son is spending his vacation with his dad. To make matters worse, her relationship with Police Chief Ron Karlson is up in the air and they haven’t spoken since June. Maybe the only good thing is that she’s got a writing job at last. Wilmont Charleston-Rutherford want her to help him with his memoirs, and JJ doesn’t care if he’s making it all up. All she has to do to make some much-needed money is keep her mouth shut and fix some of the worst prose she’s ever seen.

Of course, keeping her mouth shut isn’t JJ’s strong point. When she loses her temper so does her boss, and she’s back to job-hunting. That’s bad enough, but when Wilmont Charleston-Rutherford turns up dead, everyone remembers JJ fought with him. About the time the police are wondering if JJ might have tried to avenge the English language, her sewer backs up, and the dead man’s missing daughter shows up on her doorstep—only to disappear again before morning. JJ has her work cut out for to find the girl, the killer, and a new septic tank before anyone else dies—but at least the murder has her talking to Ron again.

"What the—hey, watch that thing!” I yelled as the man in white brought his saw toward my immobilized arm.

Nurse Chu patted my shoulder comfortingly, but she didn’t loosen her grip on the casted limb she held against the table.


"Don’t worry, Ms. MacGregor,” she said, “The doctor hardly ever slips and cuts off anyone’s arm.”


I swallowed hard, reminding myself that these were medical professionals. Despite appearances, they weren’t planning to torture me, cut off my arm, or damage me in any way. I was in the Pismawallops Clinic getting the cast off my broken arm at last, a happy event.


I cringed anyway as the saw started to cut the plaster. “Easy there,” I said, trying to sound like I was joking. “My insurance runs out in a couple of months, and I need to be healthy when that happens!” In fact, I was doing plenty of worrying about insurance. Once my coverage under my ex-husband’s policy ran out, I was going to be scrambling to make payments on even the cheapest insurance. It was worth it, to be free of the man I thought of as pond scum, but I still worried. I fixed my gaze on the educational poster on the wall in front of me, and resolutely ignored the whining saw.


Dr. Salisbury finished cutting the cast loose and peeled the remains away. I stopped staring at the poster enjoining me to wash my hands and avoid the flu, and looked at the thing lying on the table.

The exposed arm looked white and dead, and I wasn’t sure it was attached to me. 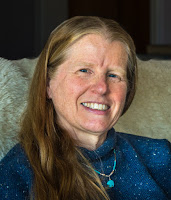 Rebecca Douglass was raised on an Island in Puget Sound only a little bigger than Pismawallops, and remembers well the special aspects of island life. She now lives and writes in the San Francisco Bay Area, and can be found on-line at www.ninjalibrarian.com and on Facebook as The Ninja Librarian. In addition to the Pismawallops PTA Mysteries (Death By Ice Cream and Death By Trombone), her books include three Ninja Librarian book, tall tales for all ages, and the humorous middle-grade fantasy Halitor the Hero. Rebecca is a long-time volunteer and servant of her local schools, now due to retire (and seek now opportunities to serve). She spends her free time bicycling, gardening, reading, and supporting her grown sons. For a vacation she likes nothing better than hiking, camping and backpacking.

The first two books in the series are on sale on Amazon for 99 cents—Death by Ice Cream and Death by Trombone. 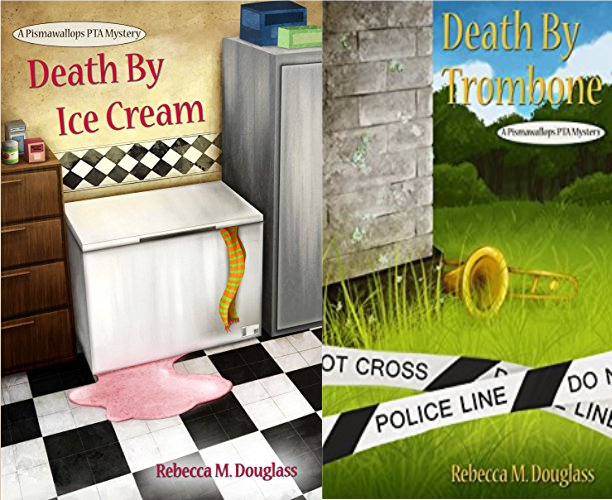 "Death by Adverb" is the third in the delightful Pismawallops PTA mystery series which is set on an island in the Puget Sound. Douglass paints a wonderful picture of the small town of Pismawallops in the Pacific Northwest, bringing to life the joys and challenges of living in a remote tight-knit island community. "Death by Adverb" can be read as a stand-alone novel, although, after reading this installment, you'll want to go back and dive into the first two books in the series.

The main character, JJ, is recently divorced and a mother of a teenage boy. She's trying to figure out what kind of relationship she wants to develop with the new man in her life who just happens to be the chief of police—something that comes in handy when investigating murders. In addition to figuring out her love life, JJ is also trying to figure out how to make ends meet. Her recent employment helping an obnoxious rich man edit his memoir leaves a lot to be desired. When her employer ends up dead, JJ gets drawn into investigating what happened and, in the process, finding herself tangled up with his family and other locals on the island who might have had it in for him.

"Death by Adverb" is another fun read by Douglass with a well-executed plot, interesting characters, and a wonderful setting.

What books have you been reading lately? Have you read any of Rebecca's books? Do you leave book reviews?


Thanks for stopping by our blog - we love it when people come visit! We're also on Facebook - pop by and say hi