Have you ever been on a boat and camper crawl? If you haven't, you've been missing out. We had the most amazing time visiting five boats and one camper at Indiantown Marina on New Year's Eve. We got to take a tour of each boat and camper and sample the delicious snacks and drinks everyone had on offer.

Fortunately (or unfortunately, probably, as the evening wore on), there's photographic evidence of the crawl. Have a look below and see what we got up to.

Stop #1 - An Amazing Start to the Crawl

First up were Doug and Tina on s/v Amazed (a 1982 O'Day 37) in the storage yard. See those yellow straps? Those are hurricane tie-down straps. If a hurricane blows through here, the straps will keep your boat tied down. That's the theory anyway. Unfortunately, they're also a great way for rats to climb up on your boat, as some other folks have found out, like our absent friends on Mangoes, Marley and Mermaids who couldn't make the crawl. 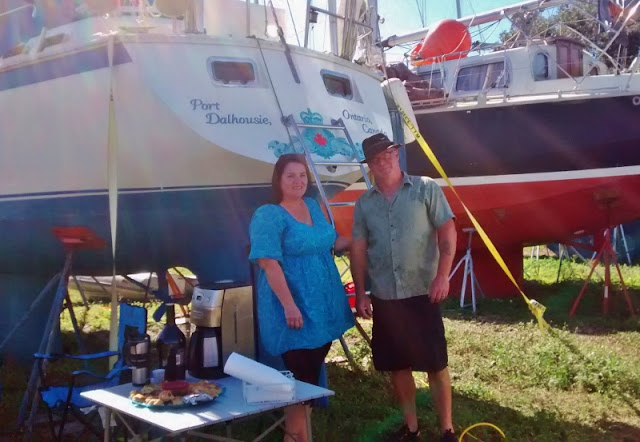 Doug and Tina are an amazing couple. Maybe that's why they named their boat s/v Amazed? Tina has got such a fun and bubbly personality and she's an amazing cook. {Let's see how many times I can work amazing into this.} Doug is a sweetheart and he looks amazingly dapper in that hat of his. {Yep, managed to work amazing in one more time. Pretty amazing, don't you think?} 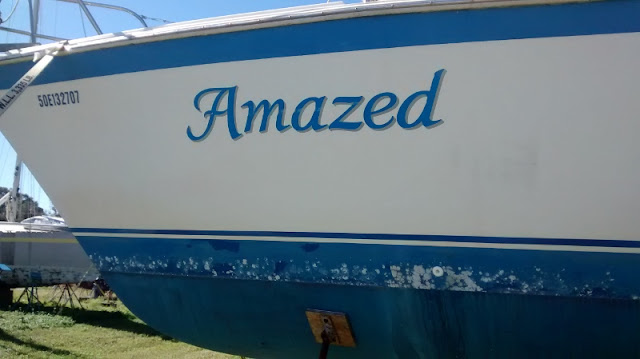 Tina and Doug served coffee with Bailey's (don't judge, we didn't start the crawl until after noon) and these delicious morsels - some stuffed with strawberries and cream cheese and some stuffed with nutella and bananas. I don't know what they're called, so I'm going to call them >>Bites of Amazing Yumminess<<. They're Canadian, so of course they served them with maple syrup. Maple syrup is one of the reasons why I love Canadians - here are some other reasons. 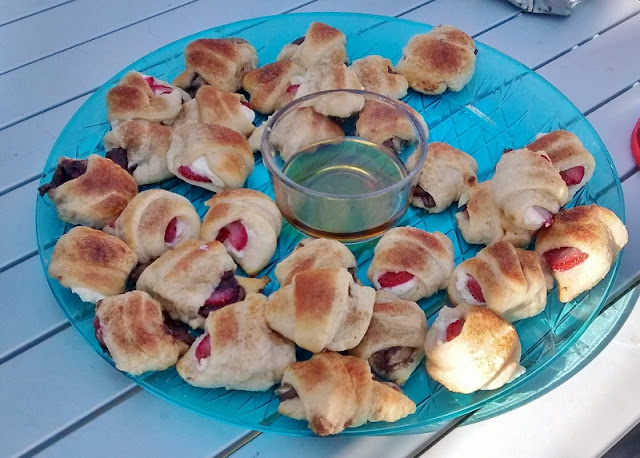 This is my lovely friend Michele from s/v Wind Spirit modeling at the bottom of the companionway on s/v Amazed. Notice the cute throw cushions? Just because you live on a boat doesn't mean you can't have throw cushions. And can you ever really have enough throw cushions? Guys - don't answer that one. 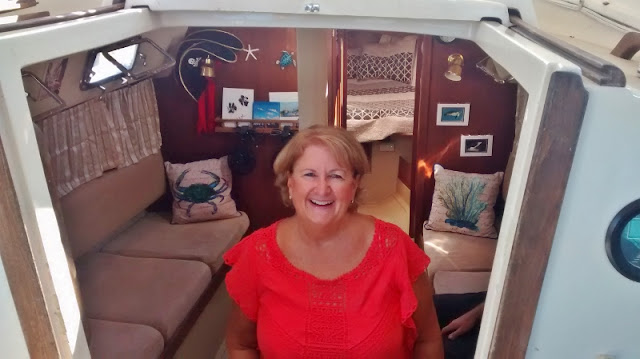 Next up were Ted and Sandy on s/v Ragtime Gal (a 1988 Liberty Yacht Gatsby motorsailer). They're such a fun couple. You can tell by their New Year's glasses. Sandy is a wonderful cook. We occasionally have potlucks where everyone is supposed to bring one side dish to share. Sandy always goes all out and brings at least three dishes - all equally delicious (love her banana pudding!). Ted has a great sense of humor. See that beard of his? He started growing it when they started working on their boat and he's threatening to not shave it off until their boat is finished. 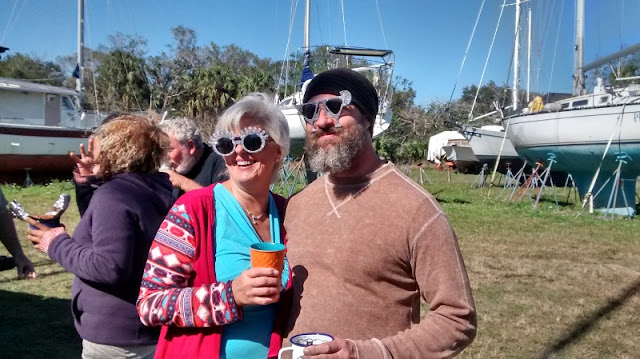 
And here's s/v Ragtime Gal in the workyard. She looks sad. Boats like to be in the water, not on land. She has been a labor of love for Ted and Sandy. Although, when you find out that you need to shell out even more money because, yet again, something else needs to be replaced or fixed, it probably becomes less of a labor of love and more just plain old, bank account-draining labor. Can someone remind me why we own boats again? 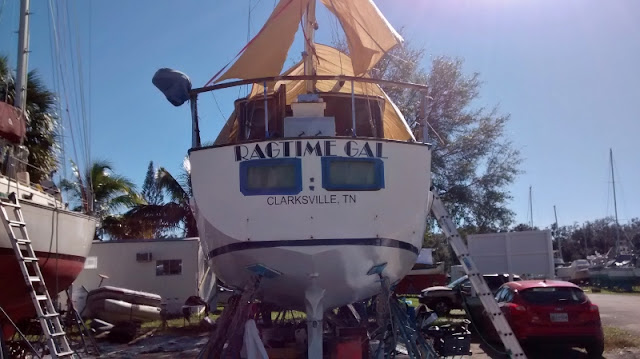 Naturally, Sandy outdid herself in terms of food. Just take a look at this. Yes, that's a porcupine and palm trees made out of fruit, nutella, and homemade caramel sauce. She also made some delicious sausage potato egg bakes, along with a vegetarian sweet potato option. But wait, that's not all...she also made these things with chocolate in them. I'm not sure what else was in them. There was chocolate, that was good enough for me. Ted served up Marvelous Marys to accompany the food. 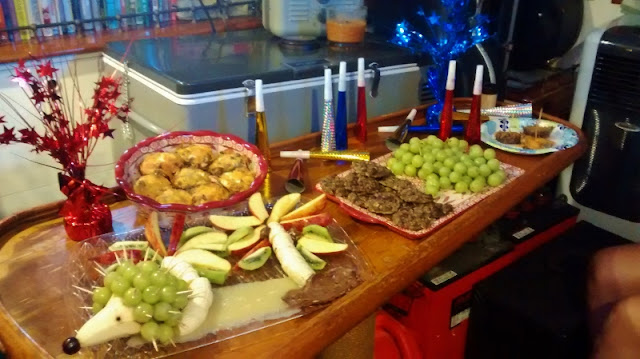 The third stop was right next door with Andrea and Scott on s/v Circuitous (a 1987 Island Packet IP38). They're an adorable couple. Not only are they adorable, they're also professional divers. Check out Andrea's underwater photos on Instagram. 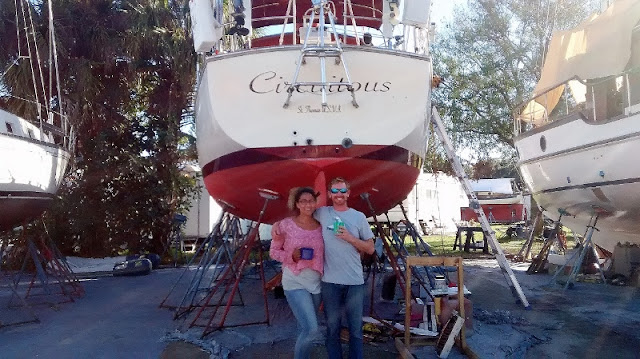 I love garlic. The smell greeting you when you made your way onto s/v Circuitous was heavenly. Andrea and Scott made the most delicious stuffed mushrooms and garlic bread. I wanted to lick the plates to get the last of the garlicky goodness off of them, but I hadn't had quite enough to drink by that point. For which I'm sure everyone is extremely grateful. No one really likes to see people lick plates. Dogs, that's okay, but humans, not so much.

To accompany the shrooms and bread, Andrea and Scott served Moscow Mules. Yum. Takes me back to my days living in Glasgow where a friend introduced them to me. Island Packets are considered to be very desirable boats. By the time we got to s/v Circuitous, I was starting to feel a little nervous about what people would think when they got to our boat. It's so much smaller and, shall we say, less desirable. I mean, look, they've got this huge chart table area on s/v Circuitous which doubles as a magazine display area. Very chi-chi. 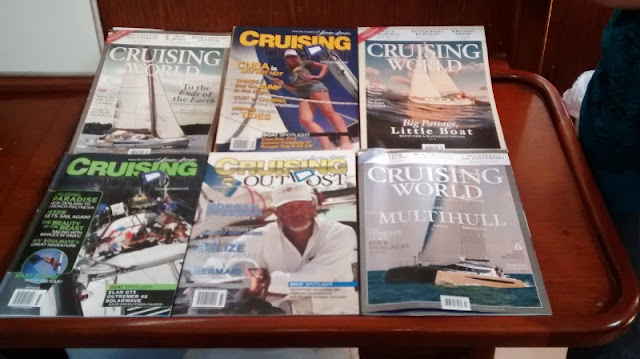 Considering I have a plastic dinosaur from the dollar store on my boat, I was delighted to see this on Andrea and Scott's boat. Kindred spirits. 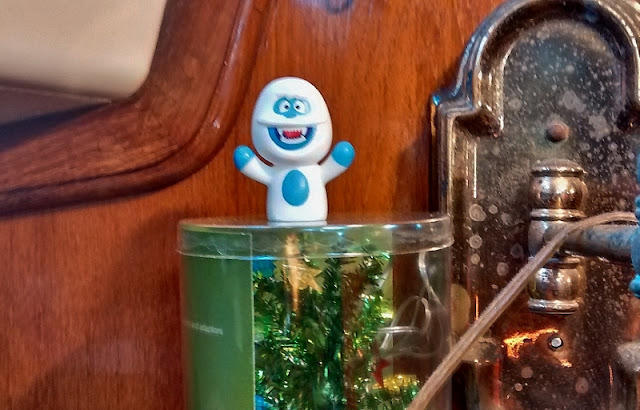 Then it was off to Tina and Doug's again. No, not back to their boat but to their camper (a 2014 Jayhawk White Hawk Ultralight). I don't know if she has a name, so I'm going to call her r/v Amazed, "r/v" being short for recreational vehicle.

Tina and Doug are smart. They live in their camper while they're working on their boat. None of this living in chaos for these two. No, at the end of the work day, they come back to their cute, spacious, and, most importantly, clean and un-chaotic camper. 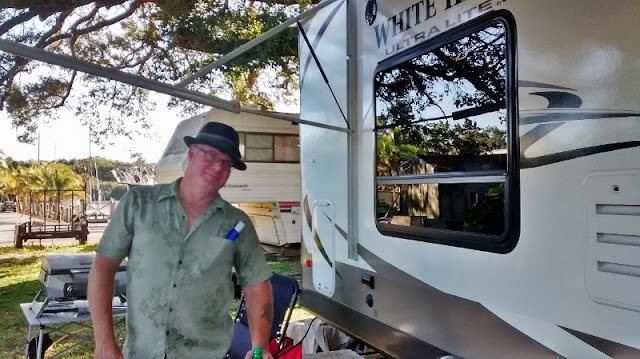 As if the >>Bites of Amazing Yuminess<< wasn't enough at their boat, Tina made more food for us to enjoy at the camper - bean dip and chips. This picture really doesn't do it justice. I'm intrigued by the red pen on the table. Did we feel the need to record something important by this point in case we didn't remember the next day? If so, does anyone remember where we put the piece of paper that we wrote important stuff down on?

Tina's famous sangria was served along with the bean dip and, at some point, Doug broke out the whisky. 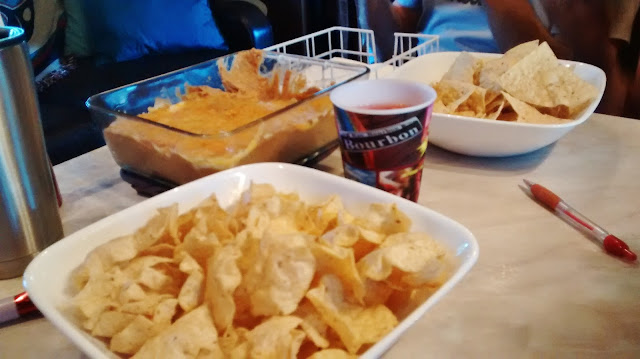 Here's another blurry picture  - this time of Andrea and Scott looking adorable. I remember getting into some sort of deep philosophical conversation with Scott about his red beard. At least it seemed like it was deep and philosophical. It was probably more along the lines of, "Hey, your beard is red." "Yeah, it is. Pass the bean dip." 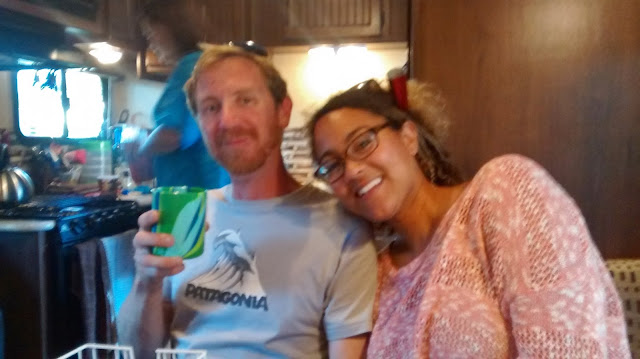 Here's a picture of some of the gang hanging out in the camper. That's Duwan on the left, Ted and Sandy in the middle, and Michele's husband, Bruce, at the end. 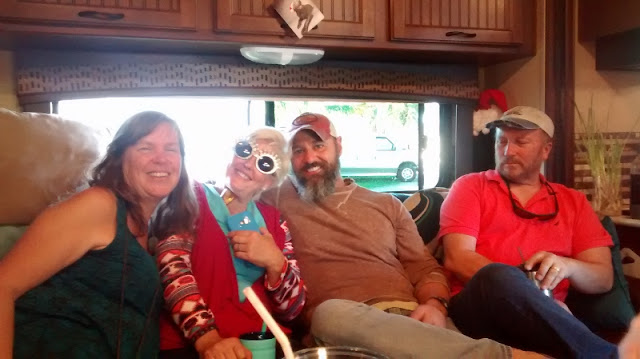 Then it was time to head to my boat, s/v Tickety Boo (a Moody 346), and answer the question that had been weighing on everyone's mind - "How many people can you fit on a 34' boat?" The answer is ten. Sadly, my Scott (as opposed to Andrea's Scott) was still in Scotland so we weren't able to see if we could fit eleven on our boat. I have a feeling that we could have made it happen.

Here's the gang getting on s/v Tickety Boo. What's harder - climbing up a ladder to get to a boat in the workyard or climbing over lifelines to get onto a boat sitting in the alligator-infested water?


I served up antipasti, which is a fancy way of saying cheese and meats and things from jars, along with some Freixenet Cordon Negro cava (mixed with cranberry juice for those who like their bubbles diluted). 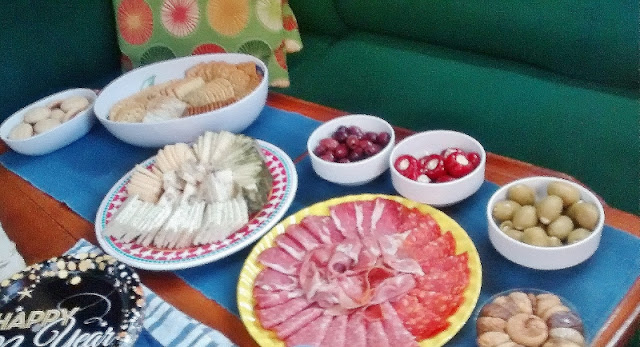 Okay, this will give you an idea of how tiny my boat is. This is Doug coming through the hobbit-sized door to our aft cabin. It's like living in a tiny dollhouse.

The last "official" stop of the night was on Greg and Duwan's Catalina 36, s/v Blue Wing. From what I hear, there was another "unofficial" stop back at Doug and Tina's camper. By that time, I was in bed.

Greg and Duwan are some of my favorite people, not just because they took us in at their place in Atlanta when we evacuated Florida during Hurricane Irma and showed us an amazing time, but because they're also some really cool cats. They just exude coolness. I feel cooler when I stand in their general vicinity.

For some reason, I don't have a picture of Greg and Duwan together. In fact, I barely have any pictures of Greg from the crawl. I know that, at one point, he went off to play music at another party (he's the guy in black playing the guitar). Maybe that has something to do with it.


Duwan makes the best nachos. She takes the time to make sure every chip is covered in cheese. That's the sign of a true nacho artiste. There was some sort of dip too, but I don't remember much about it. I was completely focused on the nachos. Along with the nachos, they served hot chocolate with peppermint schnapps and the "champagne of beer," Miller High Life.


At some point, someone thought it would be a great idea for Andrea to braid Ted's beard. I'm not sure who that someone is...oh wait, apparently it was me. I think this was the point where I probably decided to call it a night.


How did you ring in the New Year? Have you ever been on a boat / camper crawl?