Going For A Walk In Search Of Hamburgers & Monuments | Stocking Island, Bahamas

Note: Our blog lags reality by many, many weeks. So while you're reading about our cruising adventures in the Bahamas, in reality we're back at Indiantown Marina working on boat projects. Cruising in the Bahamas is so much more fun. {Sigh}

We seriously spent way too much time at George Town. It's a place that draws cruisers in and never lets them leave. Some people call it Chicken Harbour because folks make it all the way to there but then chicken out when it comes to carrying on further down the Bahamas and onward to the Caribbean.

While we didn't have any plans to head to the Caribbean this season, we really, really wanted to get the heck out of George Town and explore more of the Bahamian islands further south, places like Long Island and Conception Island.

In general, we were complete and utter slugs while we waited except for the one day we decided to go for a walk on Stocking Island.

Because we were anchored off of Monument Beach, we figured we might was well go check out the monument on top of the hill. 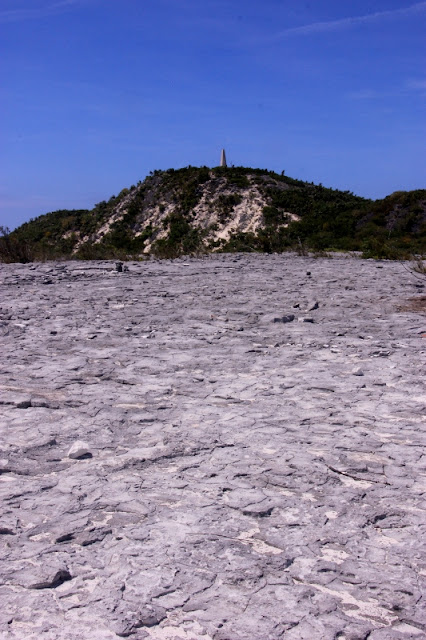 The landscape on this side of the hill is pretty cool. From far away it kind of reminds me of the Giant's Causeway in Ireland if you squint just right, ignore the bright sunshine and pretend its drizzly and cold. Once you're up close and personal, it doesn't look anything like it. 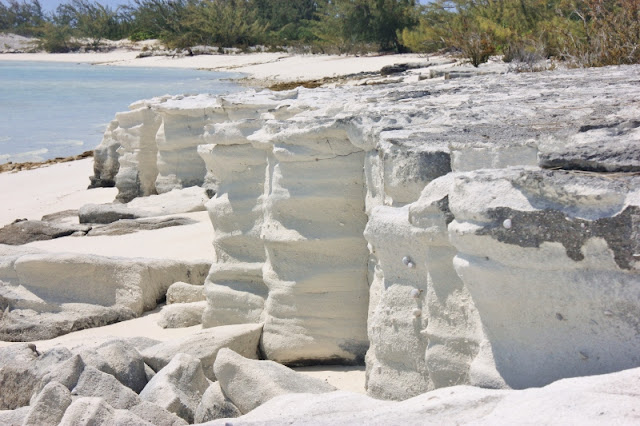 Turns out there isn't a trail head on the south side of the hill, or at least one we could find, so we took our dinghy over to Hamburger Beach. There used to be a shack selling hamburgers there. Nowadays, it's all boarded up, which was a shame as I always get hungry when I go for a walk. A cheeseburger would have been nice to munch on along the way. 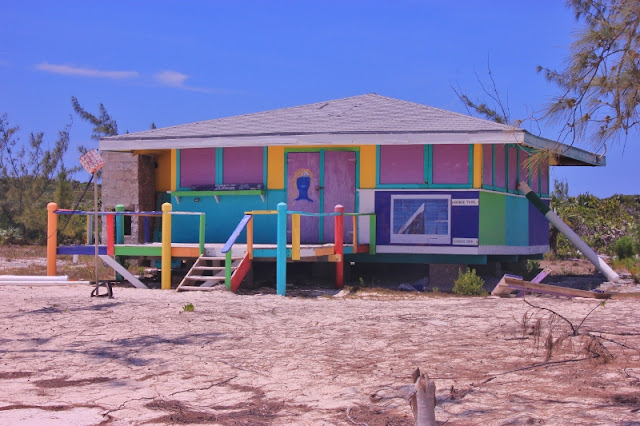 Looks like some cruisers might have painted this on one of the boards. Notice the ship peeking out from underneath her hair? 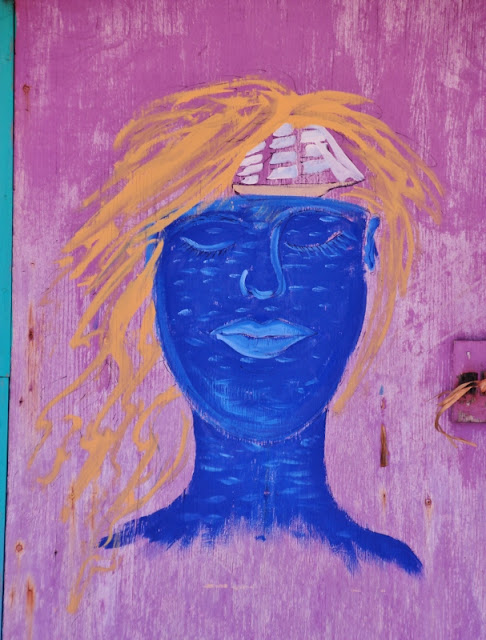 Cruisers like to leave signs everywhere to mark their visits to places.

Behind the old hamburger shack are some tumbled down outbuildings. Guess this one used to be the bathroom. See the toilet underneath? 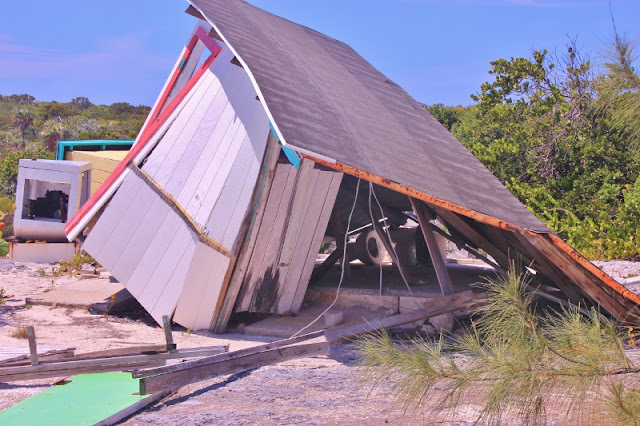 We finally found the trail head and headed off in search of the monument. 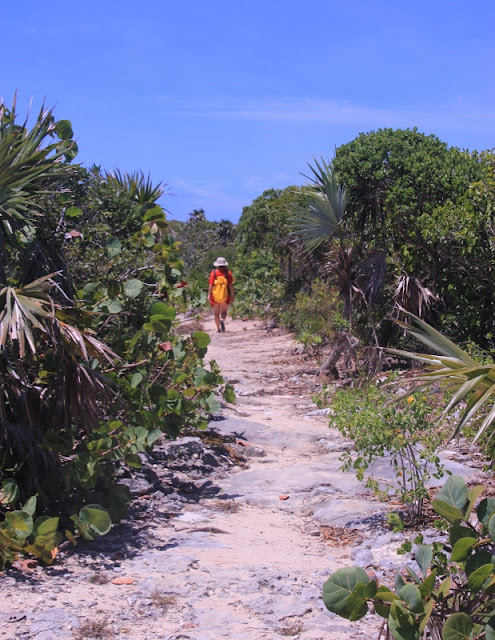 It was a bit of a climb up the hill. Thankfully, the wonderful volunteers who maintain these trails, installed a rope to help pull yourself up the tricky bits. Once we got up to the top, we paused to take in the views. Look there's Tickety Boo! 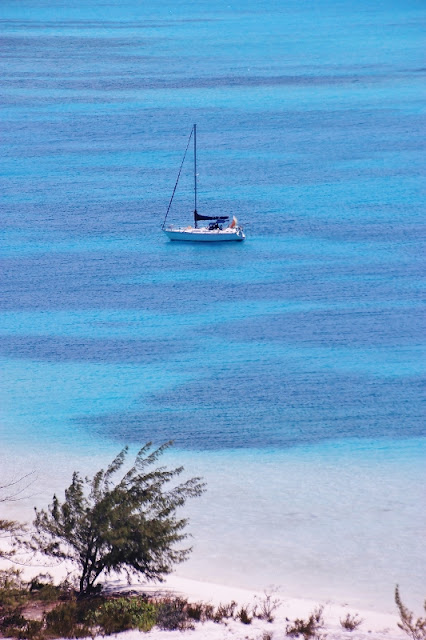 After checking out the monument, we walked back down the hill (always so much easier walking down than up) and headed over to the Atlantic side of the island to check out the tide pools. 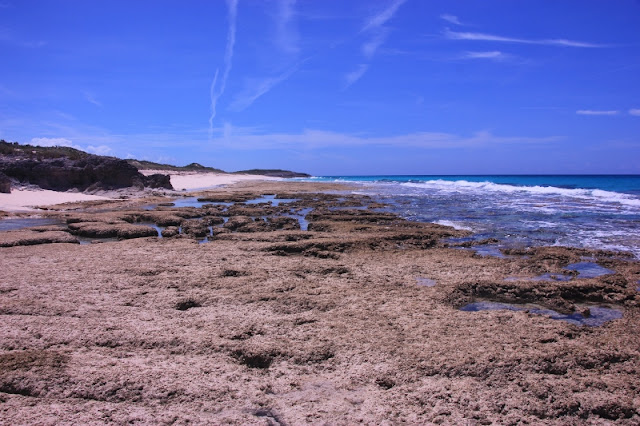 We finally made our way back along the trail to Hamburger Beach. I might have whined again for a little bit about wanting a cheeseburger. Instead we settled for leftover spaghetti pie for dinner.

23 JUNE
Moved the boat to Kidd Cove and went into George Town. Got a 60-day extension on our visas. Got provisions at Exuma Markets. The mail boat with the fresh meat must have come in, but the one carrying dairy products appears to be lost at sea. Got 15 gallons of RO water. Went up to Fowl Cay, but didn't look good for anchoring so headed back to old spot at Monument Beach by Stocking Island. Nautical Miles = 8. Spending = $28.50 (groceries) and $3 (trash).

Have you ever been stuck someplace waiting for decent weather? What did you do to pass the time? Do you like hamburgers?

If you're interested in more of our Going for a Walk posts, click on Walk under Labels on the right hand side.