We don't have an underwater camera, so this is the only picture we have from our time at the Cambridge Cay area of the Exuma Cays Land & Sea Park. 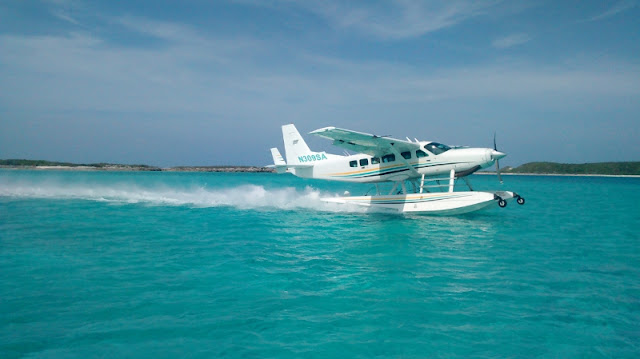 Yep, that's a seaplane taking off right next to our boat.

And by right next to our boat, I mean scary close.

And by scary close, I mean, holy heck, isn't the pilot afraid he's going to crash into something?

And by something, I mean our boat!

Okay, that was probably a bit dramatic. But I figure the drama might help distract me from the fact that we don't have any pictures of our adventures snorkeling at Cambridge Cay. If we had, I'd show you shots of all of the brightly colored fish we saw at the Sea Aquarium reef.

And I'd show you pictures of the plane crash we snorkeled over. It was pretty cool. That is until Scott noticed there was a shark swimming nearby. If we had had an underwater camera, he'd probably have taken a picture of the shark. I was making my way back to our dinghy at too much of a rapid pace to care about documenting our latest shark encounter.

But the best pictures I'd show you would be of the Rocky Dundas sea caves. You have to snorkel under a ledge and then you pop up into these incredible caves with eerie looking stalactite and stalagmite formations. Don't ask me to tell you the difference between the two. I can never remember. All I know is that they're cool.

{Sigh} We really need to get an underwater camera.

6 JUNE
Moved over to Pasture Cay. Went snorkeling at the Sea Aquarium. Super choppy, but that doesn't seem to bother the fish for some reason. Nautical Miles = 1. Engine = 35 minutes. Spending = Nil

7 JUNE
Finally used the butternut squash we've been carrying around for months. Still good and even better in soup! Snorkeled the plane wreck and made another visit to the Sea Aquarium. Nautical Miles = Nil. Engine = Nil. Spending = Nil.

8 JUNE
Anchor up at 8:30 AM. Anchor down around the corner at 9:30 AM at the north side of Bell Cay. Checked out the anchorage at Cambridge Cay first, but too choppy. Super long and choppy dinghy ride to Dundas Rock sea caves, but totally worth it. It's times like this that you hope your outboard engine doesn't decide to quit on you. Nautical Miles = 4. Engine = 1 hour 15 mins. Spending = Nil


Do you have a camera? What do you like to take photos of? Have you ever seen a seaplane take off? Ever ridden on one?