How do you kill time when you’re waiting for something? Do you twiddle your thumbs? Do you stare out the window? Do you binge watch TV? Do you take a lot of long naps? Do you read? Do you make treats?

We did all of the above while we waited in Marsh Harbour in the hopes of getting our broken dinghy davit sorted. Well, except the thumb twiddling. I never did get the point of that. It’s a lot like thumb wrestling, except without the satisfaction of winning something. Or the distraction of getting your thumb squashed.

It’s fair to say that Marsh Harbour isn’t our favorite spot in the Abacos. It’s a great place to stock up on groceries, propane, supplies and, theoretically, get some welding done. But other than that, there aren’t a lot of distractions, especially when the weather is crappy.

So we binge watched some Lost, read some books, stared at other boats and took naps when the excitement of it all got too overwhelming.

Those of you who live on land probably binge watch TV without a care in the world. You press a button on the remote and the TV comes on. Occasionally, you press the pause button and go to the fridge to get a snack. You watch episode after episode without worrying about whether electricity is going to stop flowing from the plug to the TV.

It’s a little different on our sailboat. When we watch TV shows, we have to check out battery monitor periodically to make sure we have enough power to watch the next episode and find out whether Kate chooses Jack or Sawyer.

When the sun is shining and our solar panel is mounted on our dinghy davit, we gets lots of juicy amps flowing freely to our batteries. We get up from time to time to adjust the angle of the panel to follow the sun as it moves from east to west.

Sadly, with our broken dinghy davit, we had to temporarily mount our solar panel on top of our aft cabin. 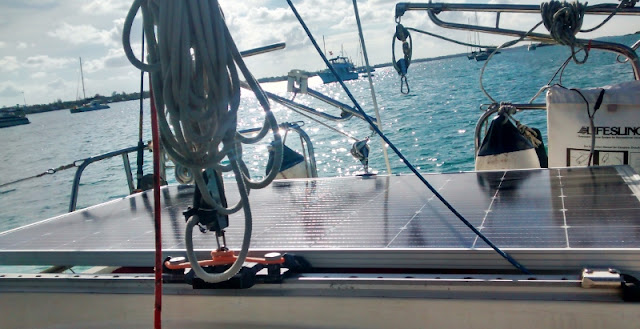 Two problems with this:

1 - It covered the hatch which meant we couldn’t get air freely flowing into the cabin. Heat makes some of us cranky.

Then things got worse. The clouds and rain moved in and cut off our supply of sunshine. This was getting serious. Were we going to be stuck with a fridge full of warm beer and rotting meat and never find out why Desmond kept pushing that button?!

Fortunately, our handy Honda generator came to the rescue. 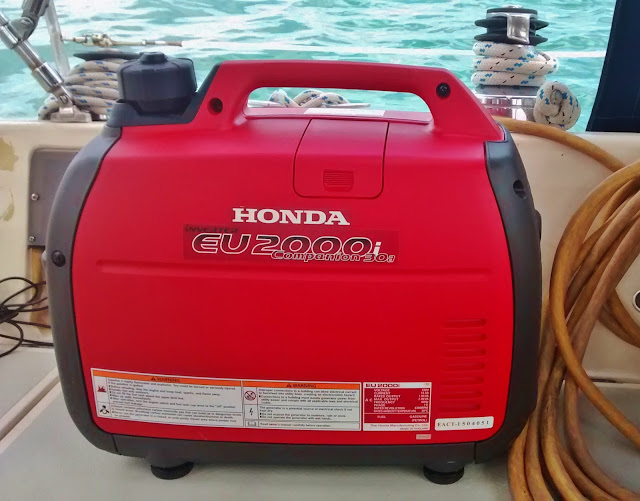 We got it this year for exactly this reason. We knew a day would come when the sun would stop shining. We plugged it in to our shore power and charged our batteries. More Lost! More cold beer! Less chance of dying from eating tainted meat! It’s the little things that count.

22 APRIL
Dropped my breakfast burrito on the floor. Had to settle for a granola bar instead. Did some baking. Limited solar power, so ran generator for a while. Nautical miles = Nil. Engine hours = Nil. Spending = Nil.

23 APRIL
Rained all day. Read and binge watched Lost. Had to run generator again. Made soup and bread. The soup was awful. The bread wasn’t awful. Big squall came through late at night. Gusts around 50 knots. Turned on engine and prepared to take action if we dragged anchor. Nautical miles = Nil. Engine hours = 2.75. Spending = Nil.

24 APRIL
Contacted welder and Kato Marine regarding broken dinghy davit. Watched a guy get his bitch wings on while someone anchored next to them. Nautical miles = Nil. Engine hours = Nil. Spending = Nil.

25 APRIL
Figured out way to put solar panel back up on broken davit. So nice to be able to get lots of juicy amps from the sun. More emails about davit. Checked out an Asian market run by a guy names Johnny Cash. Went to Maxwell’s. Tried to make Bahamian mac n’cheese. Failed experiment. Very disappointing. Got an email from a blog follower anchored next to us. Made plans to meet up. Nautical miles = Nil. Engine hours = Nil. Spending = $18.04 (ground beef, carrots, cheese, tonic water, milk)

Do you ever worry about having enough power for your needs? What’s the last show you binge watched? Do you like thumb wrestling?