Yikes, How Did This Happen? | Hero Lost Cover Reveal

Well, this is scary. Somehow the short story I entered into the Insecure Writer's Support Group (IWSG) anthology contest got picked by the judges. Yikes!

That means that my story is going to be published in early May by Dancing Lemur Press. And not published like the kind of books I used to "publish" as a child which were made out of construction paper and crayons and held together with ribbon, but like real publishing. You know, the kind of book you can buy on Amazon.

I have to say that I'm freaking out a little bit. After all, it's the very first story that I've ever written.

Sure, I write random nonsense on this blog all the time and I've been working on a cozy murder mystery for ages, but I've never typed "THE END" at the bottom of a page and submitted it to be judged, let alone have it be published for all of the world to read. Yes, I know the whole world isn't going to read it, but a few people might. {Gulp}

Many, many thanks to everyone who supported and encouraged me including members of the IWSG community, my family and my wonderful beta readers - Liesbet of Roaming About and fellow IWSG member, Melissa from Little Cunning Plan and Lucy from The Larks of Independence. And many, many thanks to all of you who read this blog. It's due to your kind comments and feedback that I've had the courage to take a stab at writing real stuff and not just silly blog posts.

My co-authors are amazingly talented people and I'm honored to have been selected alongside of them. I'll introduce them to you over the next few months.

In the meantime, this is what the cover is going to look like - pretty cool, huh? 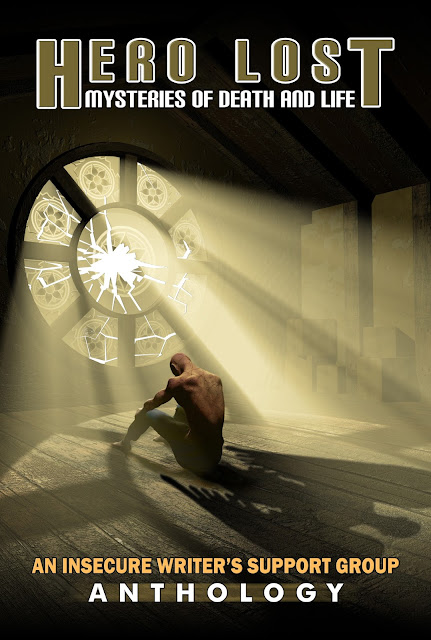 Can a lost hero find redemption?

What if Death himself wanted to die? Can deliverance be found on a bloody battlefield? Could the gift of silvering become a prison for those who possessed it? Will an ancient warrior be forever the caretaker of a house of mystery?

Hand-picked by a panel of agents and authors, these twelve tales will take you into the heart of heroes who have fallen from grace. Join the journey and discover a hero’s redemption!

Check out these other cover reveal blog posts by my co-authors and others:

Have you ever tried something new and put yourself out there to be judged by others? Have you ever had anything published?