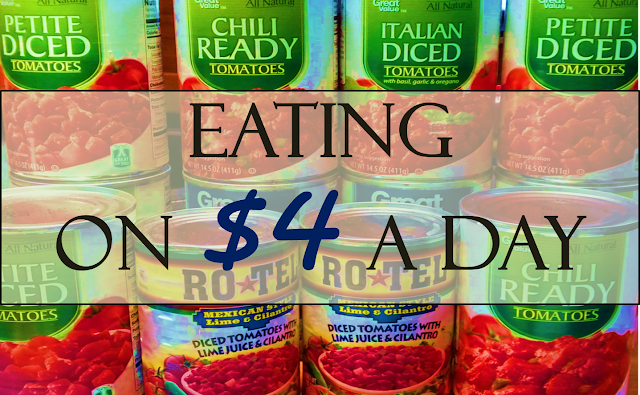 During February, I participated in the Eating on $4 a Day SNAP Challenge. The challenge allows people to experience the difficulties of living on a limited food budget and gain an understanding of the struggles many no-income and low-income people in the States face trying to feed their families, as well as highlight the good works that charitable organizations are doing to help address hunger.

If you want to know more about the challenge itself, click here to read Monday’s post which has background on the challenge and the “rules” I followed (or tried to follow). If you want to know what I ate on my limited food budget of $127 for the month, click here for Wednesday’s post which will give you the scoop on cooking with beans and ham hocks.

Today’s post wraps up the Eating on $4 a Day series and talks about the insights I gained and the lessons I learned during the challenge. Next week we’ll be back with some non-food related posts including thoughts on how to convince your partner to go adventuring by boat, RV or camel, as well as an update on the latest boat projects happening here on SV Tickety Boo.

Freezers are awesome, and not just for ice cream.

I’ll just come out and admit it – I’m a food waster. Generally, I’m not a big fan of leftovers, unless we’re talking about leftover lasagna which I can eat morning, noon and night for days on end. Because I’m cooking for one right now while Scott is working overseas, I end up with a lot of leftovers. In a perfect world, if I made a pot of black bean chili, I would eat it for four nights in a row. In the real world, I’ll end up throwing out the leftovers after day two because I’m sick of it.

I can picture some of you saying to yourselves, Duh, Ellen. The answer’s simple. Just put the leftovers into the freezer and heat them up later when you’re in the mood for more black bean chili.

It’s a great idea. One problem – I don’t have a freezer. Now, some of you may be saying to yourselves, What?! No freezer? Where the heck do you keep the ice cream?

For those of you who aren’t regular blog readers, you may not realize that I live on a sailboat. Of course, living on a sailboat doesn’t mean you can’t have a freezer. In fact, a friend of mine at the marina has a freezer on her boat and regularly taunts me with the fact that she can have ice cream anytime she wants. Actually, she doesn’t taunt me. She’s too sweet for that. I am jealous of her ice cream stash though. Our boat didn’t come with a freezer and we have no plans to put one in. It would cost money, we don’t really have a place to put it and it would just be one other thing that might break on us.

I’m just glad we have a fridge – a big improvement over our last boat.

So, during the challenge, because I don’t have a freezer, I had to suck it up and eat a lot of leftovers. People who live on a limited food budget don’t always have the option of chucking leftovers out just because they fancy something new.

Cooking can be challenging when you don’t have a stove or oven.

When I first flagged up that I was doing this challenge, someone (can’t remember who) pointed out that some no-income and low-income families don’t have well-equipped kitchen facilities which can potentially limit the types of meals that they can make on a budget. For example, folks might be living in motel rooms with only a small fridge and microwave.

Wait, that sounds like me! I live in a tiny space (probably less than 350 sq ft), I have a tiny fridge and a microwave. Yep, no stove or oven. Of course, I only have myself to blame for the lack of stove and oven. One of the lingering things on my boat project list is to fix our propane system, which would allow me to safely use our stove and oven.

In the meantime, because we’re hooked up to shore power, I rely on our microwave and crock pot for cooking, which actually doesn’t bother me, and in fact has some advantages, such not heating up the boat and saving on propane costs. If it did bother me, I would have gotten around to fixing the propane system by now.

During the challenge, I tried to imagine what it would be like cooking for a family in a tiny kitchen on a limited food budget. I suspect that it’s a lot easier for me to cope with cooking in a kitchen (or galley in my case) that isn’t all that large or well-equipped (by American standards) than it might be for no-income or low-income families. For me, it’s a choice. And, I’ve become used to living in tiny spaces on our two boats and in our tiny camper without the amenities that others might expect. Plus, I’m cooking for just myself. The downside is that I can’t bake bread (which could be a money-saver) and the recipes I can make are more limited.

It pays to shop around.

Our boat is at a marina in a small town in rural southern Florida. There's one grocery store (an IGA), a green grocer of sorts and a couple of other smaller markets. If you want to go to a larger grocery store, the nearest Walmart and Publix are about twenty miles away in Stuart.

Small towns have many advantages, but food can often be more expensive due to distribution costs and lack of competition. The local grocery store has a decent selection (especially of Hispanic foods), but the prices are much higher than at Walmart. For example, a half gallon of milk costs me $2.18 at Walmart in Stuart compared to $2.79 at the local IGA. The store recently changed hands and people are complaining that prices have gone up even further.

The easy answer for me is to do my shopping at Walmart (although it isn’t always cheaper once you factor in the cost of gas). But, many people in town don’t have cars and are reliant on shopping locally, which means they’ll pay more for food. When the IGA was bought by the new owners, they actually didn’t accept SNAP or WIC benefits for what seemed like ages, which I imagine may have caused difficulties for some local families.

I don’t eat a lot of meat in general (compared to many Americans), and, in fact, I was a vegetarian for five years back in the dark ages (you can read about what made me become a carnivore again here), but in order to survive on my limited food budget during February, I ended up cooking more vegetarian recipes and eating a lot more PB&J sandwiches.

Meat can take a big chunk out of your food budget, so going meatless entirely or at least part of the time can help you stretch your food budget. A blog reader flagged up this free cookbook, which has lots of great recipe ideas and inspiration for frugal cooking, including many vegetarian recipes.

While I didn’t quite resort to eating compressed soy tubes (which someone on Facebook assured me can be passed off as kielbasa if you put a ton of sauerkraut on it), I did end up doing the vegie thing about half of the month. I probably should be cutting back on red meat more, so compressed soy tubes may be making an appearance in my life here soon.

While that may be the case, I still think it was a useful challenge to participate in as it really raised my awareness of what it’s like to live on a limited budget due to circumstances, rather than choice (as in our case). And for some families, the average SNAP benefit may be all that they have to work with if they need to divert other money intended for food to things like rent, utilities and medical costs.

Scott and I have had the good fortune to have had the financial wherewithal to be able to build up savings to allow us to cruise and travel for a while on a budget. Not everyone is so fortunate. This challenge definitely reminded me of that.