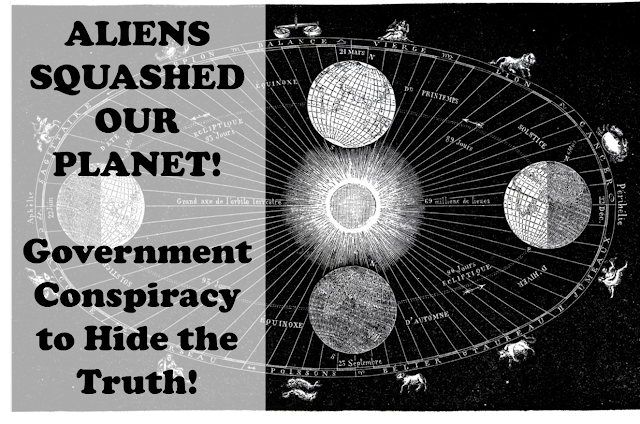 In my ongoing efforts to become a more productive human being, I decided to dig Scott’s RYA (Royal Yachting Association) navigation books out and start learning more about how to get our sailboat from Point A to Point B without crashing into a reef, the shore or a submerged UFO.

To be honest, I’ve been kind of dreading studying navigation because there’s a lot of numbers, math and weird gadgets involved. But, there is always the worry that Scott could get abducted by aliens while we’re out there on the water and I’ll have to be able to helm the boat back to safety on my own. Yes, fear of alien abduction is one of my key motivators. I used to also be motivated by chocolate chip cookies, but I’ve had to give them up recently.

Let’s all take a minute to think about that…life without chocolate chip cookies. Sad, isn’t it.

So, as I was sitting there munching on carrot sticks and reading through the RYA Navigation Handbook, I came across this passage:

Our world is a ball of rock, just under 13,000 kilometres in diameter, spinning through space…it is also slightly squashed.


Okay, what?! Our planet is squashed? All my life, I’ve been told that our planet is round, like an orange. The models of the Earth they showed us in school were all round, like oranges. I’ve never seen a model of the Earth that’s squashed. Have you? Why have people been keeping this a secret? Why hasn’t the National Enquirer done its civic duty, gotten a hold of this information and shared it with the general public?

More importantly, who did this? Or rather, what did this? Is this yet more evidence of alien interference in our solar system? Did some aliens drunk on homemade hooch distilled from asteroid particles go around shooting up our planet with their ray guns and end up shaving off parts of it?

Folks, this is why you study navigation - to find out the truth. I’ve always heard the truth was out there, but now I know where to find it – in the RYA study materials.

I also found out this other shocking secret about the the development of the GPS system we all rely upon:

To prevent civilian receivers being used for military purposes, the American government adopted a policy…under which deliberate errors were introduced to the CA code signal to degrade its accuracy to about 100 metres.


Yes, the government messed around with the GPS coding so that it would be unreliable for us regular folk at more than 100 metres. According to the RYA, this policy has now abandoned, but the government retains the ability to reintroduce it. Hmm....what else have they done to the GPS system? Are there really satellites fixing our coordinates or are these "satellites" actually alien spacecraft in orbit tracking our every move?


But, here's the most shocking secret of all. The chocolate industry is so insidious that they've even blackmailed the RYA into mentioning chocolate while they're talking about how to deal with compass error. Here's the mnemonic you're supposed to use to remember that Variation (V) separates True (T) and Magnetic (M) and that Deviation (D) separates Magnetic (M) from Compass (C).


If you've never tried a Cadbury's Dairy Milk chocolate bar, don't. The minute you try one, you'll turn into a junkie, desperately looking for your next fix. Every single time you look at the compass on your boat -  BAM! - you'll be craving chocolate again.

Who knew that studying navigation could be so interesting. Now, if only I could figure out how to use Scott's Portland course plotter and resist the urge to color in all of the rose compasses on our charts with colored pencils and markers.

What secret government conspiracies have you discovered lately? Or, for the more serious minded among you, any tips to learning navigation?