Going For A Walk In Search Of Wild Pigs | St Lucie Lock, Florida

I used to do a lot of "Going for a Walk" posts, but lately my walks have been kind of blah. When I do manage to get the motivation to put real shoes on (you know the ones with closed toes and laces which are so confining when you pretty much spend every day barefoot or in flip-flops) and go for a walk, it’s usually up the road from the marina and either left into an industrial park or right across the railroad tracks and to the store. Neither route is really worthy of a "Going for a Walk" post.

But, now I’ve been for a proper walk for the first time in a long time. The kind that gets your shoes muddy and has the thrilling possibility of getting trampled on by wild pigs. I bet you’re asking yourself, where can all this excitement be had? Well, all you have to do is head over to the St Lucie Lock National Recreation Area on the Okeechobee Waterway in Florida.

Scott and I checked out the St Lucie Lock last year when we were looking for places to camp during our USA road trip. There are two campgrounds there – Phipps Park is run by the county and the St Lucie South Campground is run by the US Corp of Engineers. They both have pretty box standard RV sites, but the St Lucie South Campground has something you don’t often find – camp sites for boats. It’s kind of neat to see a place where nomads of the water and land can meet and mingle. 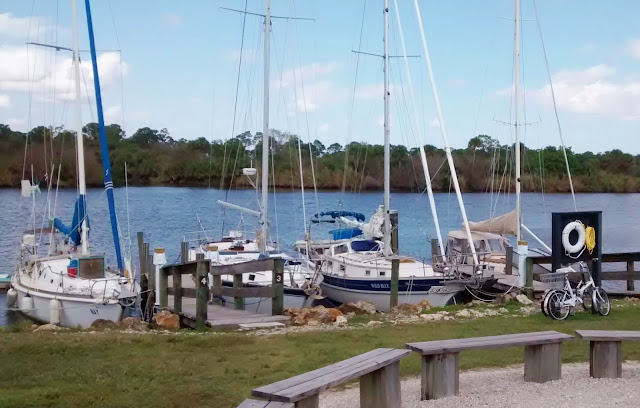 There are a few walks you can do at the St Lucie Lock. There’s a nature trail on the south side near the campground or you can cross the lock and dam and try out the two trails on the north side. My friend let me decide – the north or the south. The volunteer at the visitor center (where you can score free Wi-Fi) told us there were wild pigs on the north side. That made the choice easy – who wouldn’t want to see wild pigs and possibly get trampled on by them when they’re out walking?

Okay, if my friend was here right now, she’d probably interject and say that we never discussed wild pigs when deciding where to go for our walk. I hate to admit it, but she’s right - wild pigs were not discussed. But, in my defense, and as many highly respected writers and editors will tell you (like the fine folks over at the National Enquirer), why let the truth get in the way of a good story. Wild pigs sounds so much more exciting than mosquitoes, which was about all the wildlife we encountered while out walking. Don’t you agree?

So, off we went excitedly skipping across the lock in anticipation of our wild pig encounter.

When Scott and I were originally at the St Lucie Lock, our focus was on camping. Little did we know that just a few months later, we would be going through the lock ourselves on our very own sailboat when we made our way from Indiantown to the Bahamas. I had never been through a lock before and didn’t have a clue how it worked. So, imagine how much fun it was to come back months later and watch boats go through the lock and say to myself in sort of a blase tone reminiscent of thirteen year old teenagers, Yeah, been there, done that.

See that boat in the lock? It had been at Indiantown Marina and was making its way eastwards towards Stuart. Also, notice how the US flag is at half-mast? That was for the passing of Supreme Court Justice Antonin Scalia. 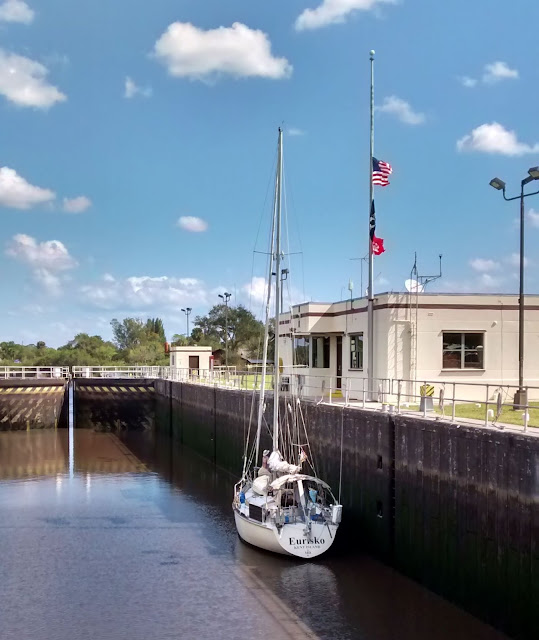 Here’s what the view looks like to the north from on top of the dam. By the way, the water smelled really bad standing on top of the dam. Even the lizards scurried across quickly to get away from the smell. Maybe it has something to do with all of that toxic run-off from the sugar cane fields that they’re spilling out of Lake Okeechobee. Which is surprising as sugar tastes good - why wouldn’t its toxic run-off smell good too? 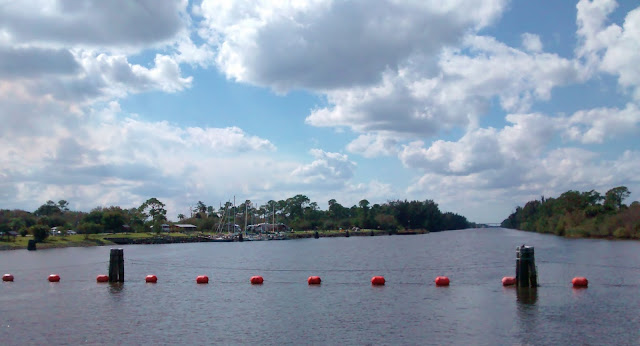 Here's what the dam looks like from the other side. 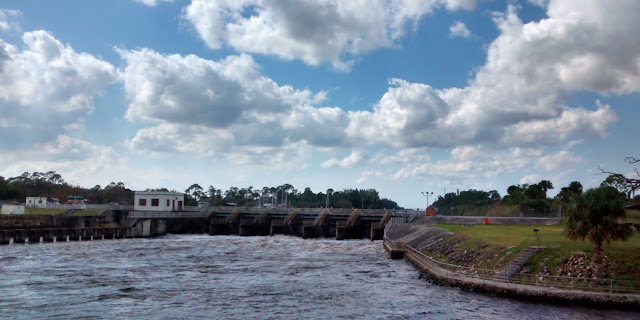 On the other side of the dam is a picnic area near this old tree. It looks spooky. Kind of like a warning sign to be wary of the wild pigs roaming through the brush in search of unsuspecting humans with a backpack full of Snicker’s bars. Wild pigs like Snicker’s bars. The peanuts mingled with all that chocolate and caramel nougaty goodness make them feel like they’re having a healthy snack. You know, because peanuts are like little protein pellets and protein is good for you. (#funpigfacts)

At the trail head, you have a choice of the yellow trail or the red trail. The visitor center had a map of the trails, but for some reason I didn’t pick up a copy so it was time for a completely uninformed decision. Often, they’re the best kind. We chose yellow. It’s a good color.

I didn’t take any pictures of the yellow trail as I was too busy keeping a lookout for wild pigs. It was about what you would expect - palm trees, sandy soil and shells scattered about. Turns out it was pretty short. So, we decided to do the red trail too. This time, I took pictures. We hadn’t seen any wild pigs, so I figured they must be napping off their Snicker's bars and we would be safe.

Parts of the trail were kind of muddy, which you don’t really expect in the dry season in southern Florida. But, there has been a lot of rain this winter. Crazy amounts of rain. Although there appeared to be hoof prints from wild pigs in the mud, I summoned my courage to keep walking forward on the trail, taking pictures to document our perilous adventures in the jungle. (#slightexaggeration) 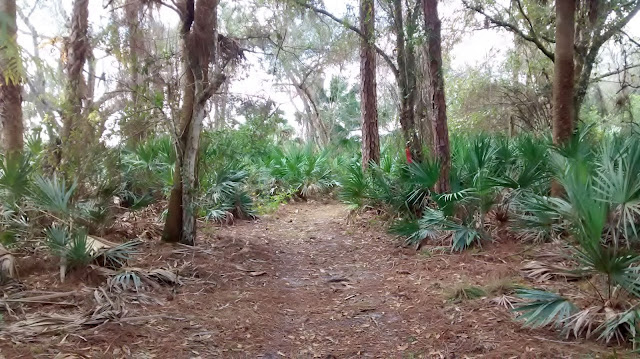 We came across a little bridge. I love bridges. They make great photo ops. I tried to convince my friend to stand on the bridge so I could take her picture, but she refused and pointed at the water. It was gross. She was right. Definitely not a nice photo op. 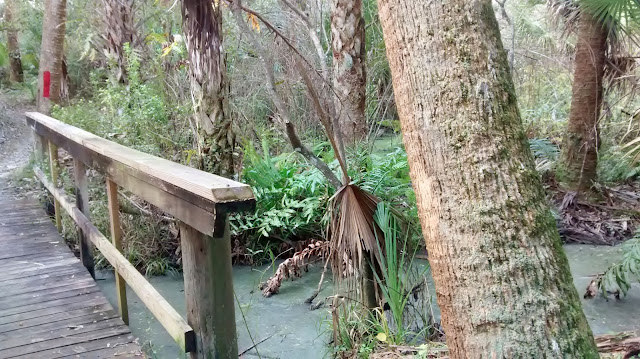 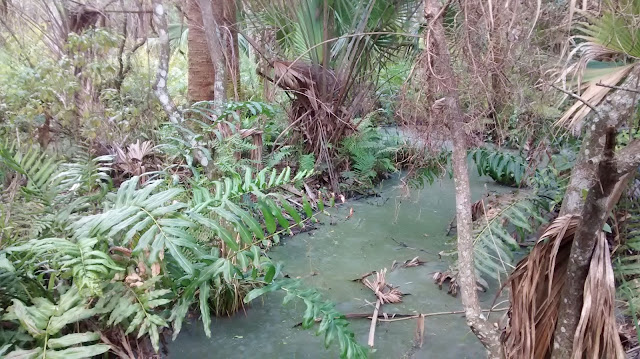 Fortunately, the red trail was even shorter than the yellow trail, so we managed to get back out to the picnic area quickly and away from the evil, blood-sucking mosquitoes. The good thing about going for a walk is that you have no guilt afterwards for eating a Snicker's bar. After all, what's the point in burning off all those calories if you're not going to replace them? (#wastenotwantnot)

Have you ever been trampled on by wild pigs or had another exciting wildlife encounter?

If you want to see more of our Going for a Walk posts, click on Walk on the right hand side under the Labels section.

Linked up with Weekend Travel Inspiration

Posted by The Cynical Sailor at 5:44 AM