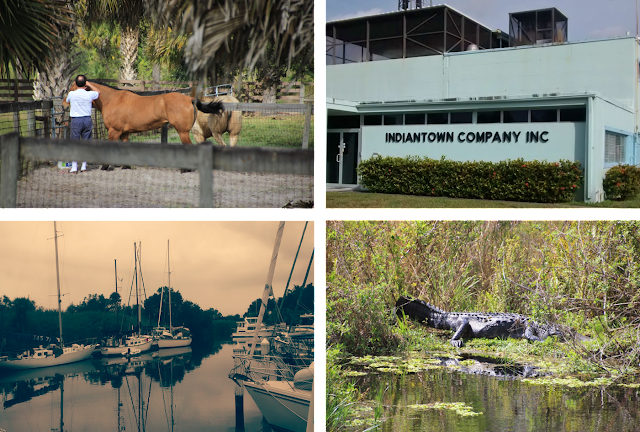 If you’ve never heard of Indiantown, I’m not surprised. Until we stumbled across it in our boat search last year, I’d never heard of if either. Indiantown is a small town located to the east of Lake Okeechobee in southern Florida smack dab in the middle of sugar cane fields and alligator-infested waters. Still don’t know where it is? Have a look at the map below. 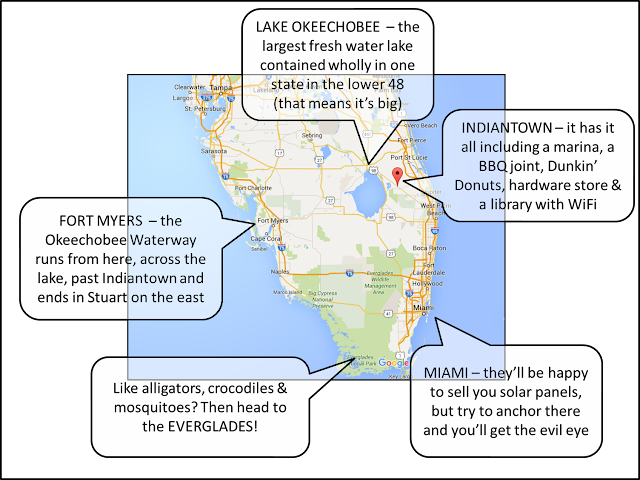 Indiantown isn't exactly a tourist destination. Most visitors to Florida stick to the coasts, where all the action is. If they do go inland, it’s usually to Orlando to say hi to Mickey Mouse. So, it’s no wonder that Indiantown gets overlooked and no one knows much about it. But, I’m here to change all of that. After you read the marginally interesting tidbits I’ve found out about Indiantown, you’ll be chomping at the bit to get here on your next holiday. Lucky for you there actually happens to be a hotel in town – the Seminole Inn. It’s conveniently located right next to the brand-spanking new Dunkin’ Donuts. See, how can you go wrong – a bed to sleep in and donuts in the morning.

All right, that tidbit isn’t even marginally interesting, I’ll grant you that. But, what is interesting is the fact that the majority of the population is Hispanic (65%). Okay, you’re right, that isn’t that interesting either. You can point to lots of towns in the States which are predominantly Hispanic.

But, what is interesting (to me at least) is that some of that population is made up of Guatemalans who speak Kanjobal. I had no idea what Kanjobal was until I saw a poster about social services programs at the doctor’s office and it was in English, Spanish and a third mystery language. Turns out it was Kanjobal – a Mayan language. Wouldn’t it be fun to learn some Kanjobal! It even has retroflex consanants - the ones where you curl your tongue in the back of your throat. So much fun to pronounce!

If you’re one of those nerdy types who likes stats, pie charts and graphs, you can find out all sorts of demographic information on Indiantown here, including the unpleasant fact that there are 13 registered sex offenders living here.

If you don’t know who Davy Jones is, then you’re way too young to be reading this blog. Davy Jones was part of the Monkees, a band from the 1960s who had dodgy haircuts and their own TV show. Those of you who remember the show are probably humming this little tune in your head just now…”Hey, hey, we’re the Monkees. And people say we monkey around. But we’re too busy singing to put anybody down.”

When he wasn’t busy being a teen idol, Davy Jones was obsessed with horses. Later in life, he moved to Indiantown where he kept a bunch of race horses. If you’re interested in horse racing, Indiantown is home to Payson Park, which folks will tell you is one of the top thoroughbred horse racing places in the States.

In 2012, Davy Jones died of a heart attack after riding one of his horses. You don’t have to spend too much time in Indiantown before someone will say to you, “Hey, did you know Davy Jones died here?” So, if you want to blend in while you're here on holiday, just answer back, “Sure did. Weren’t the services held at Holy Cross?” If you can say that in Kanjobal, all the better.

Tidbit #3 – The drive through at the Indiantown Burger King is only meant for fast food orders.

Anyway, that was the advice that one of the employees at the local Burger King gave us. Makes sense, I guess. I used to go there to get hot fudge sundaes with some friends and, when it isn’t busy, the employees would stop and have a chat with us. We learned a lot about how they train new staff and what a pain it is when people order lots of shakes. Personally, I’ve never ordered an Oreo shake, but if I ever get the hankering for say ten of them, I’ll be sure to go inside to place my order.

Okay, probably not so much a tidbit as some local color. But, this Burger King does have some of the friendliest employees you'll ever run across in a fast food joint. See, another reason to make your way to Indiantown.

Tidbit #4 – Fire is a good thing. Especially when it comes to coke.

Are you one of those people who prefers Mexican coke to American coke because it’s made with cane sugar as opposed to high-fructose corn syrup? Personally, I can’t tell the difference, but I know some people swear that it tastes so much better. They’ll go out of their way to track down bottles of the stuff in the grocery store and stockpile it just in case Donald Trump does build that wall and the supply chain across the border gets shut down.

They grow sugar cane in fields all around Indiantown. One of the quirky things about sugar cane growing is that when they’re ready to harvest the stuff, they burn the fields. Sounds counter-intuitive, doesn’t it. Burn the crop you want to harvest – how odd. Apparently, the fire burns hot and quickly and takes off just the dead leaves and some of the waxy coating before it goes out, making it all that much easier to get the cane and its sugary goodness inside.

The downside is that when they burn the fields, the ash ends up everywhere. Just washed your boat? Well, then you can be sure that the wind direction is going to clock around and scatter that ash all over your sparkly decks. Going out for a walk? Don’t breathe through your mouth or you’ll end up choking on ash.

Wasn’t that fun? Don’t you feel like you know so much more about Indiantown? Sure, maybe it’s more than you ever wanted to know, but look how much time you’ve managed to waste reading this and how many boring chores and projects you’ve managed to put off for just a little longer. Totally worth it, wasn’t it?

Thanks for stopping by our blog - we love it when people come visit! We're also on Facebook - pop by and say hi!
Posted by The Cynical Sailor at 12:39 PM