A Different Kind Of Bathroom {Or Boat Living Is Weird}

Living on a boat is weird. Sometimes, you forget how weird it is until non-boatie friends come to visit. But, when you see your home through the eyes of a landlubber, then you remember how truly weird it all is.

A month or so ago, I wrote a post about how strange a friend of mine found it to knock on our front door and come through the doorway of our boat for a visit (you can read it here). Of course, by knocking, I mean tapping on the hull, and by coming through the doorway, I mean climbing over things and doing impossible yoga moves as you make your way through the companionway and acquire bruises climbing down the ladder. Surprisingly, this turned out to be one of our more popular posts. Which just goes to show you that when it comes to blogging, you never know what’s going to resonate with your readers.

So, I thought I would do a follow-up post – this time, how different bathrooms on a boat seem to landlubbers.

After having a few beers, eventually you’re going to have to use the bathroom. Unless of course, you’re in your twenties and you can go through a case of beer without every needing to take a pee or worry about getting a beer belly. For the rest of us middle-aged folks, after a couple of cups of coffee or a few beers, we’re going to need to heed nature’s call. On land, it’s pretty simple. The bathrooms are straightforward. They look something like this. 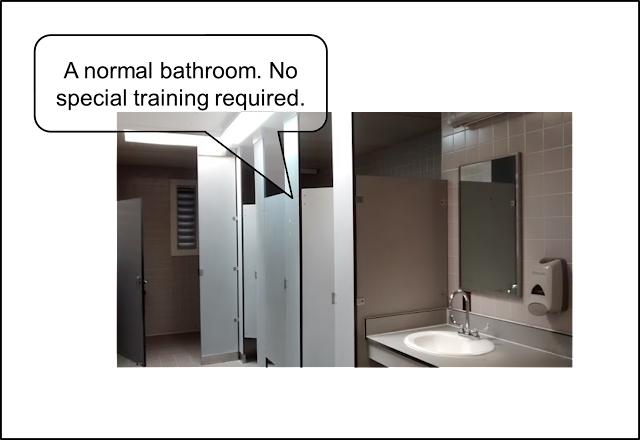 So, when you say to your hosts, Hey, can I use the bathroom?, the last thing you’re expecting is to be told that (1) it isn’t a bathroom, it’s a “head” and (2) you need training before you can operate the toilet.

Training? Are you kidding? It’s just a bathroom. You’ve been doing this ever since you graduated from potty training and started wearing big kid pants. And what’s this nonsense about calling the bathroom a head? Clearly, your hosts started drinking long before you came over for a visit because now they’re calling rooms in their boat after body parts. What’s next, calling the kitchen the digestive tract?

You have a peek inside the bathroom (you’re refusing to call it a head, no need to reinforce your hosts' crazy talk). Looks pretty normal. There’s a sink and a toilet. So far so good. For some reason though, the soap seems to be attached to the counter with velcro. That’s kind of weird. 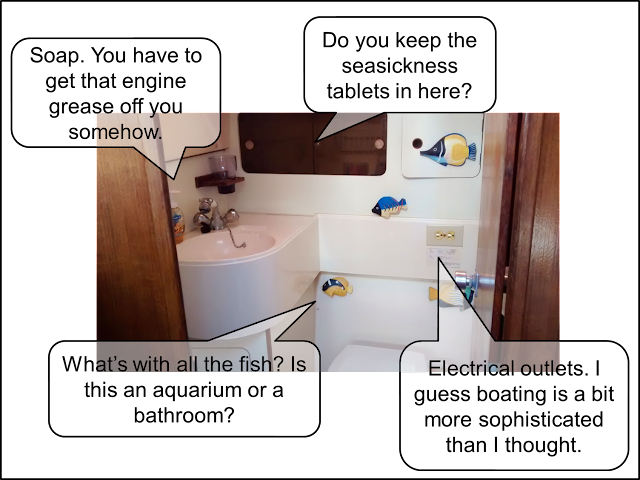 Then you look around a bit more and notice there isn’t a shower in the bathroom. Maybe there’s one in the other bathroom.

Nope, your hosts inform you, this is the one an only head on board. If you want to take a shower, you have to hang a curtain up to protect the sink and toilet from water spray and then you hose yourself down. 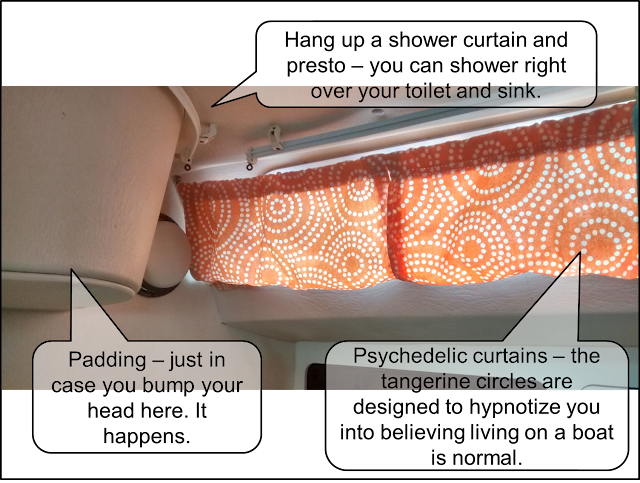 Okay, this is crazy talk. How much did these people drink before you came over? Who takes a shower standing in the middle of the bathroom? And why do they keep calling it a head? You look up to see if you can see the shower head – nothing. Your hosts shows you how the faucet in the sink can pull out and be used to shower with. This is the kind of thing you see in kitchens to wash dishes with. This is not how people shower. These boat people are really weird. 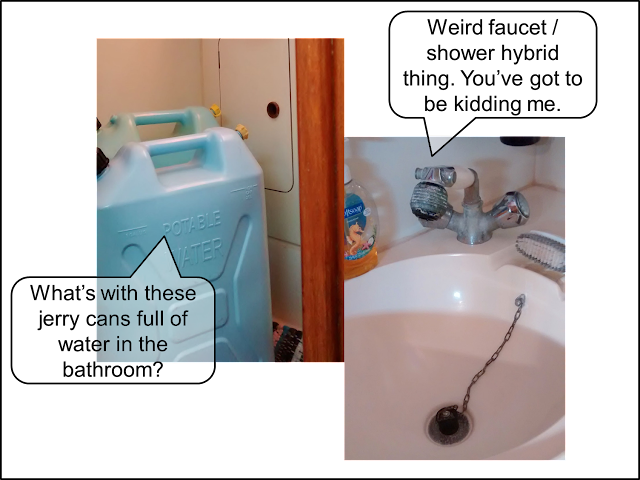 Then they tell you that’s it’s all theoretical anyway because the pump for the shower is disconnected and you can’t take a shower in the head anyways. When they want to take a shower, they go to the shower block at a marina or take a solar shower in the cockpit. Sounds like a hassle. How often do they shower anyway? Is that why they smell a bit funky? You're definitely not staying overnight on this boat.

By this time, you really have to pee so you ask what the deal is with the toilet and this training they talked about.

Your hosts start blabbering on about how you have to flip a switch one way to flush the toilet and the other way to empty the toilet into the PPB. Then they start having a heated discussion about whether you’re allowed to flush toilet paper down the head. {Again, with that head nonsense.} One of them says you have to dispose of it in a bag so the system doesn’t get clogged up, the other says you can flush three sheets down at a time.

You offer not to use any toilet paper just so that you can shut them up and get on with it. By now, it’s been a long time since that last beer. 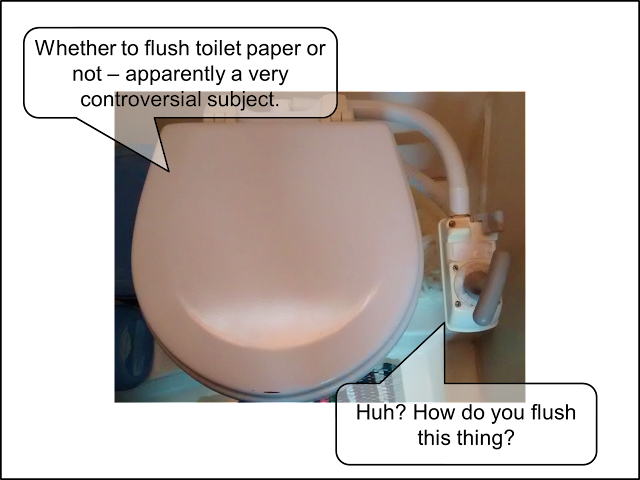 Okay, you’re feeling much better now. You remember that your hosts talked about a PPB and you foolishly ask them about it. Apparently, it stands for Pee & Poo Box and doesn’t have anything to do with PB&J sandwiches. They explain that’s how they refer to their holding tank.

Whoa. Back up a minute. Their holding tank? You mean they carry around pee and boo in a box in their boat? Gross! Definitely never buying a boat. Oh, how you wish you had never brought the topic up. Now, they want to show you how the whole pee and poo system works. They take you up into the cockpit and open up the lazarette. 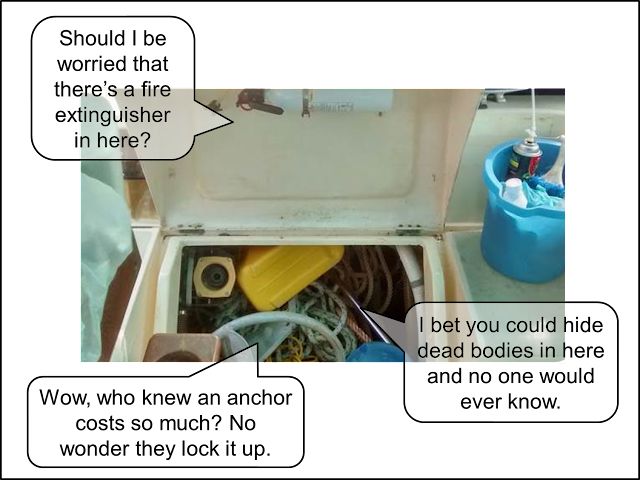 Looks like an untidy storage cupboard to you. But underneath all of that stuff are a lot of hoses and the infamous PPB. They point at something called a y-valve and explain how this is the control center of the pee and poo disposal operation on board. Turn it one way, everything goes directly overboard. Turn it another way and everything goes into the PPB. Way too much information. 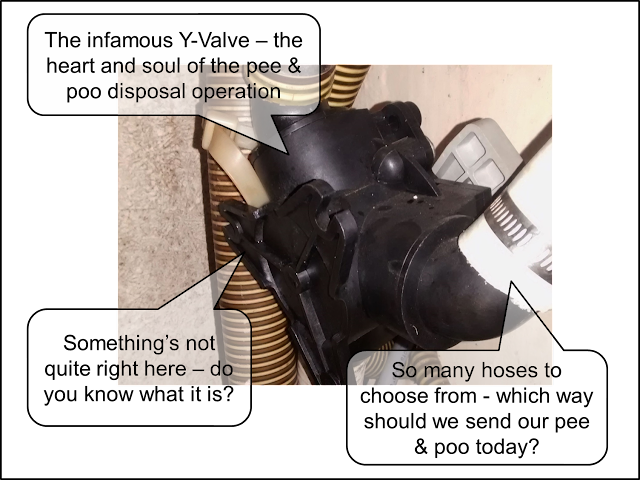 It’s all so confusing. So many hoses going in and out of the lazarette. One of your hosts shows you the labels they made so they know exactly which way their pee and poo is going. Wow, seriously, who gets that excited about a label maker? 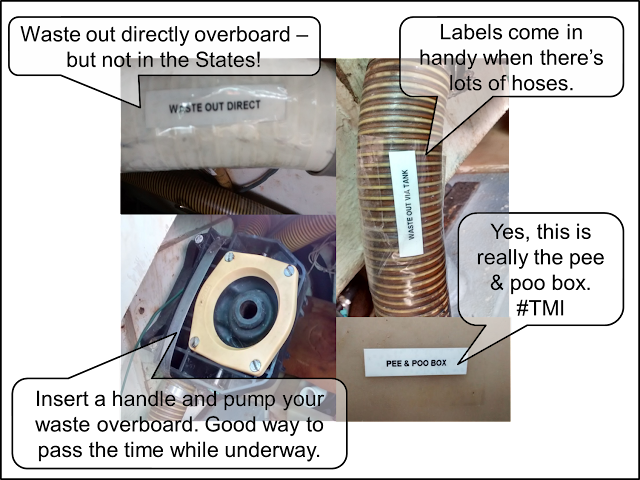 After showing you the lazarette, your hosts offer you another beer. You gladly accept. Anything to help your forget about the whole PPB thing and how weird the bathroom is on their boat. Not to mention how weird your hosts are for living on a boat, let alone making a label for their PPB.