In addition to the usual blog posts every Monday and Wednesday about our travel adventures and day-to-day life living aboard a sailboat, I also occasionally post on Saturdays, focusing on things
related to writing such as cover reveals, book launches, reviews, interviews with authors etc. So if you're a bit of a book nerd like I am, check in on Saturdays - you never know what might pop up. 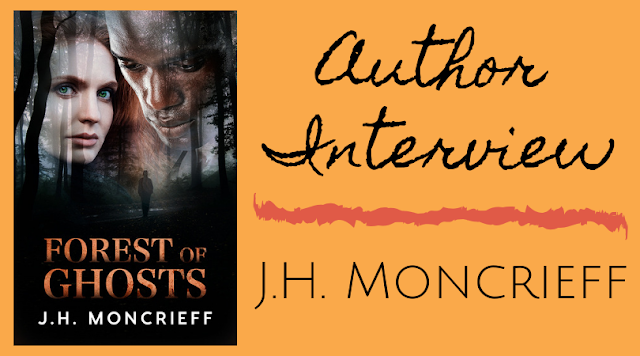 Today, I'm featuring an interview with J.H. Moncrieff to celebrate the release of Forest of Ghosts, the fourth book in her supernatural suspense GhostWriters series. J.H. is one of the many wonderful authors I've met through the Insecure Writer's Support Group. To my mind, she epitomizes what it means to be a part of a writing community - always there to support and encourage other writers and more than willing to share advice, tips, and tricks.

I'm a big fan of J.H.'s writing. I especially love the travel aspect of her GhostWriters series and being able to experience spooky things in interesting locations from the comfort of my armchair. After reading Forest of the Ghosts (it was fabulous, by the way!), I definitely want to visit Romania one of these days.

Read on to find out what J.H. has to say about writing, penguins, and cookies. She's also got a really interesting perspective on being labeled as a "horror" writer so make sure you read all the way to the end.

1 - What inspired you to write this book?

The series is set in locations I’ve actually spent time in, including the paranormal ones, and for this book, I let my readers vote on where it should be set, out of a few possible options. Romania won by a healthy margin, and ever since attending a writers’ workshop in Transylvania, I’ve wanted to write about some of my experiences there. It’s a gorgeous country, and still very much seeped in myth and legend. This was a great opportunity to meld fact with fiction.

2 - Do you have any writing rituals?

Just one. I like to have a scented candle burning when I write. Sometimes I forget, or can’t be bothered, but that’s one ritual I really enjoy, and I keep track of which candles were used for which books. Unfortunately, I use this as an excuse to buy way too many scented candles!

In my books, characters drive the plot. While I’d never say plot isn’t important, the direction it takes depends on who’s telling the story, and their own personal motivations. If Kate Carlsson from GhostWriters had been the one on her own in Romania instead of Jackson Stone, the story would have unfolded in a very different way. Since Jackson tends to act before he thinks and has a strong drive to stand up for others, he often gets himself in trouble. While he tries to learn from Kate’s more coolheaded, diplomatic example, he inevitably pisses people off—he just can’t help himself.

My favorite part of being an author is the moments when you’ve written yourself out of a tight spot, or when you realize your story has come full circle without you consciously intending it. Since I’m a pantser, I rarely know how things will turn out. There are moments of magic in writing this way. During a trip to Curaçao, I stumbled upon this creepy abandoned plantation house that had life-sized ragdolls on the porch. That image stayed with me, and when I wrote about them, I decided they contained the spirits of the evil plantation owners. Imagine my shock when I discovered later that some tribes of West Africa, where one of my protagonists originated from, believed they could entrap evil spirits in dolls. I’d never heard of this until I wrote that book, and that kind of thing happens to me a lot. It’s spooky, but also incredibly cool.

The worst part is the self-doubt. When all you’ve wanted to do since the age of five is to be a successful novelist, and then you grow up to discover how incredibly difficult that is to achieve, and how little of it appears to be within your control, it’s terrifying. I’ve written fourteen books worthy of seeing the light of day now, (I don’t count the ones from my college years and earlier), and I’ve never stopped being scared. With each new release, I’m worried people won’t like it. Writing is one of the only careers I know of where people work on a project for months and sometimes years without ever knowing they’ll be paid. There’s an incredible amount of faith, and perhaps masochism, required to keep going in this business

Hmm…now that’s a tough question. It really depends on my mood, but one of my favorites from childhood that I still make is a gumdrop cookie with oatmeal and coconut. It’s the best. Store-bought cookies don’t tend to do it for me—they’re just not the same.

6 - A penguin walks through your front door wearing a sombrero. What does he say and why did he come visit you?

Assuming the penguin can talk beyond acking and squawking, I picture him saying “Olé!” and then asking for directions. If he’s wearing a sombrero, he probably imagined he was on his way to warmer climes, like the penguins in Madagascar, and would be very disappointed to find himself here, where it’s still winter. I’d like to think he chose me because he’d heard I’m a great animal lover, and wanted to invite me to this creepy haunted location in Argentina that he just knew would be the perfect setting for my next book.

7 – What else would you like us to know about you?

That I’m not a “horror” writer. It drives me crazy when people describe me that way, because it’s so limiting. My series is supernatural suspense, so readers expecting straight-up horror will come away disappointed. I write mystery, suspense, psychological thrillers, and am working on a dark romance and a cozy mystery. Yes, three of my eight published books are horror, and I’m not ashamed of it, but I find people often use this as a way to write you off before reading a single word: “I don’t read horror.” Well, great, here are the five books that aren’t horror. Enjoy!

Thanks for stopping by, J.H.! I'd have to agree, store-bought cookies just aren't the same as homemade. I cannot wait to read your cozy mystery!

About Forest of the Ghosts 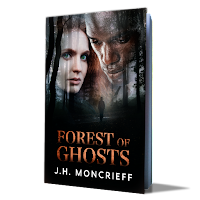 J.H. Moncrieff’s new release, Forest of Ghosts, was inspired by her real-life experiences in Romania, including Hoia Baciu, the world’s most haunted forest.

Jackson Stone is sick of ghosts. With his love life in shambles, he heads to Romania for a horror writers’ retreat, hoping it will be a break from the supernatural and breathing space from his relationship with medium Kate Carlsson.

But as his fellow writers begin disappearing or losing their minds, he realizes he needs Kate’s help.

When Jackson loses his own memory, Kate’s love is the only thing that can bring him back. But she’s falling for the man responsible for the evil in Romania. A man who claims to be her soul mate. Will this master of wraiths forever break Kate’s bond with Jackson? 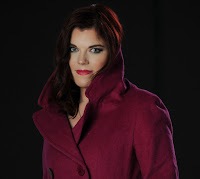 Her work has been described by reviewers as early Gillian Flynn with a little Ray Bradbury and Stephen King thrown in for good measure.

She won Harlequin's search for “the next Gillian Flynn” in 2016. Her first published novella, The Bear Who Wouldn’t Leave, was featured in Samhain’s Childhood Fears collection and stayed on its horror bestsellers list for over a year.

When not writing, she loves exploring the world's most haunted places, advocating for animal rights, and summoning her inner ninja in muay thai class.

To get free ebooks and a new spooky story every week, go to http://bit.ly/MoncrieffLibrary.

Have you ever traveled to Romania? What's the spookiest thing you've ever experienced?
Posted by The Cynical Sailor at 1:00 AM