Scott is rarely sick or feels pain. I think I can count on one hand the number of times I've seen him take painkillers. Maybe it's that stoic North Dakotan nature of his or some sort of fabulous immune system. Whatever the reason, he rarely complains about not feeling well or being in pain. So when he told me that he hurt his back, I took him pretty seriously. And I panicked a little bit.

Not just because I care about him, but because his back is essential to the smooth operation of our sailboat. Scott is a lot stronger than I am, so he gets all the unpleasant jobs like lugging around 5-gallon jerry cans full of water and diesel, pulling up the anchor and grinding in that last little bit of the headsail after I've given up.

Most things can be worked around, but pulling up our anchor isn't one of them. I've tried and I'm just not strong enough to get it all the way up, especially when the winds are high. And that's where my panic came in.

What if we had a big storm and needed to move quickly? I'm guessing fear and adrenaline would kick in and I'd manage to get the anchor up. At least I'd hope so. Or Scott would get the anchor up, hurting his back even more. Not really a good solution.

We do have a windlass (a contraption that pulls your anchor and chain up for you), but it hasn't been working. Fixing it has moved way up on the boat project list, let me tell you. Even up ahead of fixing the leaking portlights.

So, we ended up hanging around Rock Sound in Eleuthera for five days so that Scott could rest up. Turns out it's a pretty cool place to hang around at and they have the best grocery store we've seen since Marsh Harbour. That's when you know you've been cruising too long in the Bahamas - you get excited about well-stocked grocery stores.

We parked our dinghy on the dock by a restaurant nearby the store. 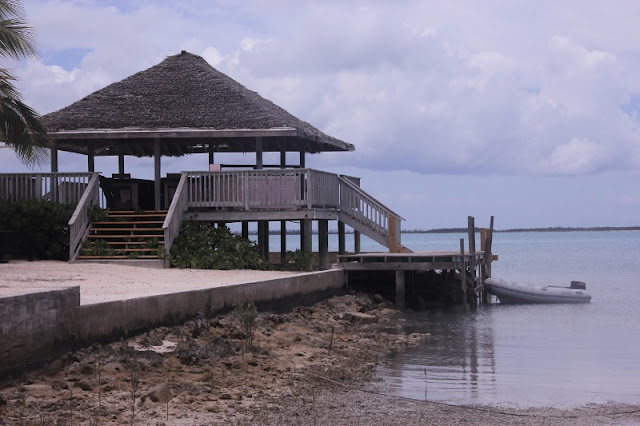 "Dis way to...where?" We saw this sign on the restaurant. I really want to know what they're pointing at. It looks like someone painted over the mystery location at some point. 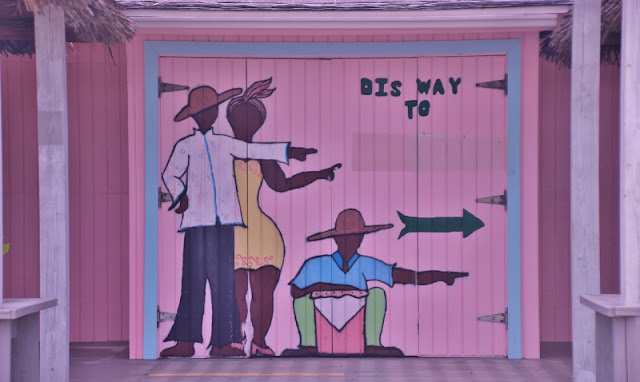 Before hitting the grocery store, we checked out the two gas stations nearby to see what their prices were for diesel. I probably should have taken a picture of the grocery store. They had everything you could possibly want including Irish sausages in the freezer section. They were scrumptious. 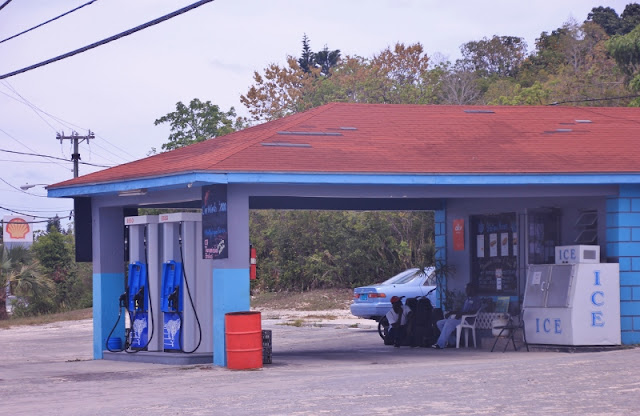 On one of our other expeditions into Rock Sound, we walked up to the blue hole. 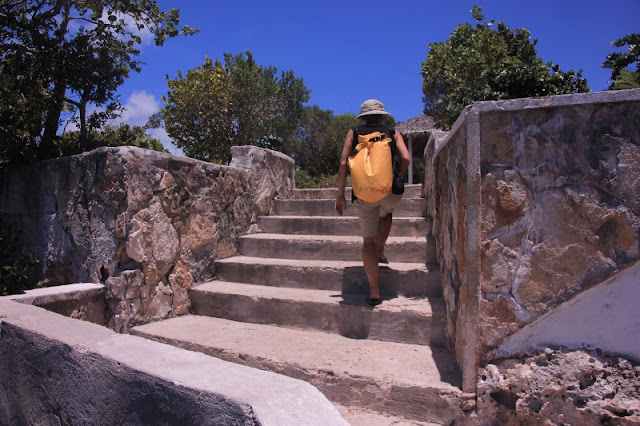 Blue holes are fascinating, especially when you find them inland in the middle of a town. We went swimming at the one at Hoffman Cay, but passed on swimming in this one. 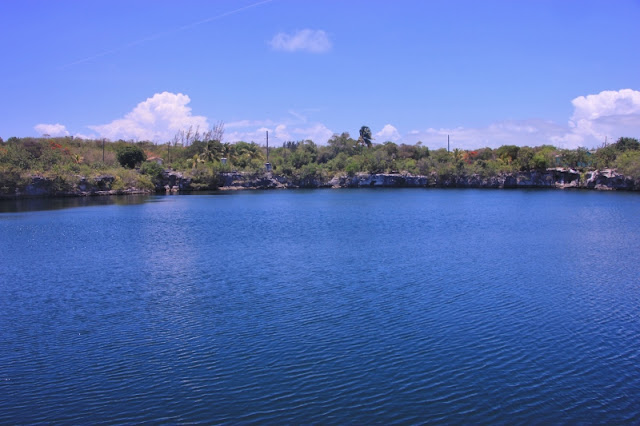 I wonder if people go fishing there or if you're even allowed to. 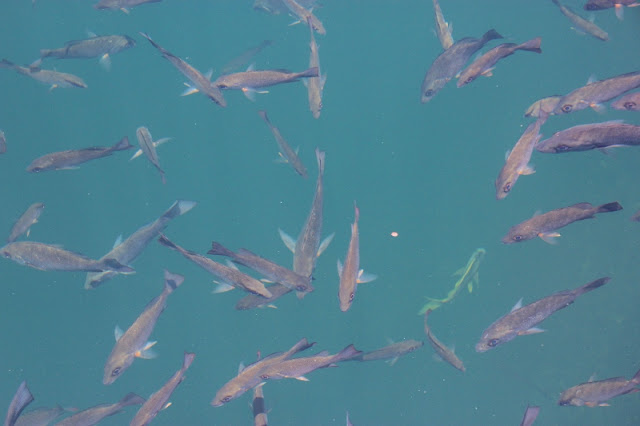 The people were so friendly in Rock Sound, but then again I don't think I've ever met a Bahamian who wasn't friendly. We walked through town checking things out and noticed this sign. A fair - who doesn't like a fair? 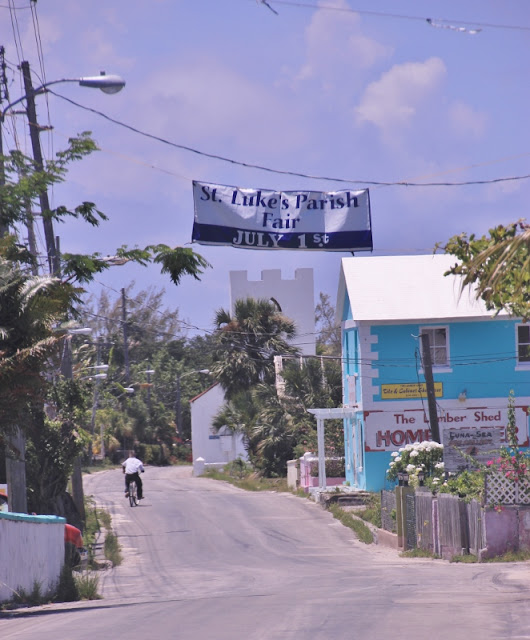 So we went. Turns out the fair wasn't at the church itself, but at a community building up the road. 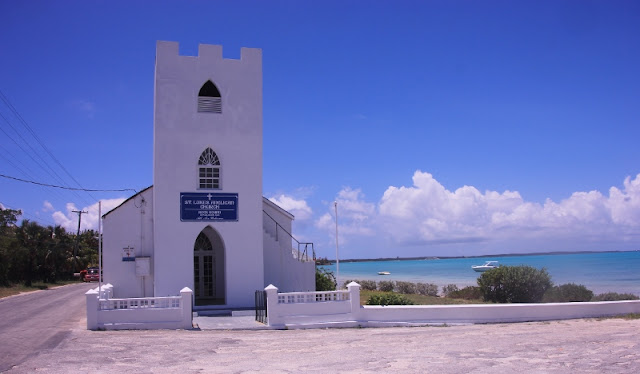 We had a great time people watching. And there were a lot of people to watch. I think everyone in Rock Sound showed up to get something to eat. There was a huge line outside of the door at one point. 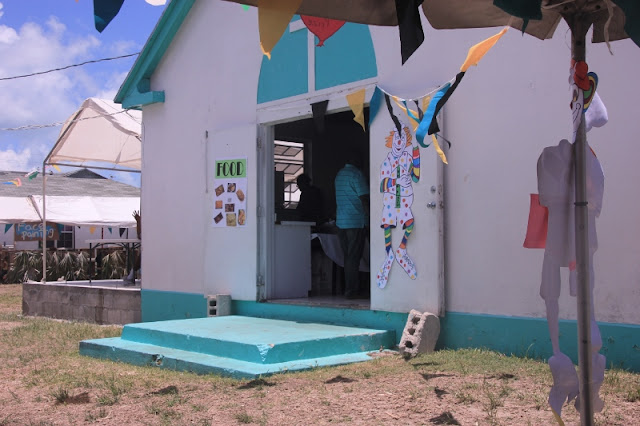 We figured if this was where all of the locals we're eating, it had to be good. And it was. We rarely eat out in the Bahamas, preferring to cook our meals on board, but this was worth it. We split a chicken dinner ($10) which came with crab rice and two sides (we got two sides of Bahamian mac n'cheese). Scott loves conch fritters and since you could get 5 of them for $1, he did - twice. Add in a can of root beer ($1) and you have the perfect meal. 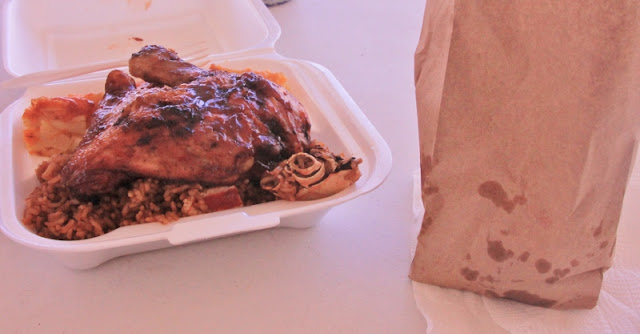 And, in case you're wondering, Scott's back got better after a few days rest and he was back to lugging jerry cans and pulling up the anchor in no time. He's a real trooper.

29 JUNE
Anchor up at 7:00 AM at Little San Salvador Island (Half Moon Cay). Anchor down at 3:00 PM in Rock Sound. Motorsailed with the headsail. Only boat in the anchorage. Fridge stopped working. Panic set in. Turned out out to just be a short, which Scott fixed. Nautical Miles = 38. Engine = 8 hours. Spending = Nil.

30 JUNE
Went to the grocery store. Nicest one we've seen since Marsh Harbour. They even have butane cartridges, cheaper than in the States. Great hardware store nearby. Started grilling dinner, but propane line leaking. Had to finish up on the stove. Nautical Miles = Nil. Engine = Nil. Spending = $43.50 (groceries and butane).

1 JULY
Fixed leaky propane hose. Lots of annoying birds keep landing on our boat. Went for a walk to the blue hole then had chicken dinner at the Anglican church fair. Walked through town. Huge bump on Ellen's head after banging into the solar panel. Ouch, but not as ouchy as Scott's back. Nautical Miles = Nil. Engine - Nil. Spending = $13 (dinner at church fair)

Have you ever eaten at a church fair? What did you have? Ever hurt your back? How was your recovery?