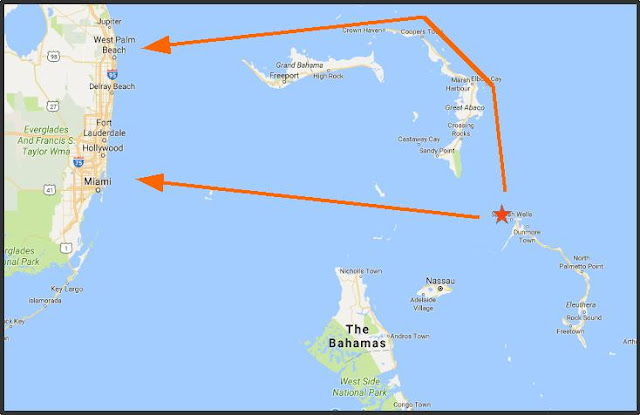 Are you one of those people who puts together lists of the pros and cons and then makes a sensible decision after careful consideration? Or are you like us and just flip a coin, letting fate decide what to do?

There we were, anchored at Royal Island near Spanish Wells in the Bahamas, trying to decide which way to go to head back to the States. Should we go north through the Abacos and over to West Palm Beach or should we go west via Bimini and then over to the Miami/Ft Lauderdale area?

We went back and forth and forth and back and around in circles for a while. By then we were so tired from our mental exertions that we took a nap, followed by sundowners in the cockpit. That's because we're strong advocates of the school of thought that says:

"Have a difficult decision to make? Why not put off until tomorrow what you don't want to do today?"


We're good at procrastinating. We put the "pro" in procrastination. All you have to do is look at our very long list of boat projects that haven't been completed to know that.

But, eventually, you have to make difficult decisions. We got through the Egg Island Cut near Royal Island and had to decide which way to go. And so we did. By flipping a coin.

Yeah, you read that right. We can't even decide what heads and tails stand for. It's a wonder we get anything done or manage to sail anywhere.

Eventually, we headed north towards the Abacos.

Turns out it was a good decision. The weather was favorable and we had a pleasant crossing. There were even rainbows and dolphins. Who knows, maybe going via Bimini would have been a good decision too. Then again, maybe we would have had bad weather and scary sea monsters in our path.

I don't have any good pictures of our crossing to share with you, so here's one of Scott's feet at anchor while we were having sundowners in the cockpit and procrastinating difficult decisions. 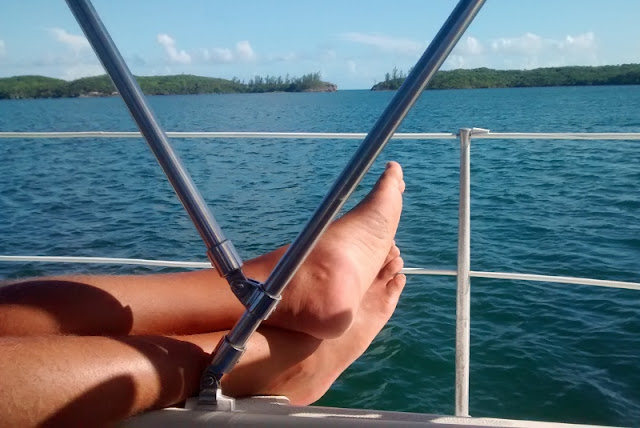 8 JULY
Went through Egg Island cut - not sure which way to go. Flipped a coin and headed to the Abacos. Sea state variable - 1-3' to 3-6'. Light winds. Several freighters - two passed close to us. Current slowed us down off of Great Abaco Island. Rainbows and dolphins spotted. North Bar cut was easy-peasy. Nautical Miles = 60. Anchor up at 6:30 AM at Royal Island. Anchor down at Tilloo Cay at 6:30 PM. Engine = 12 hours. Spending = Nil.

How do you make decisions? What's the hardest decision you ever had to make?

Thanks for stopping by our blog - we love it when people come visit! We're also on Facebook - we'd love for you to pop by and say hi!
Posted by The Cynical Sailor at 4:15 AM