674 miles, 22 hours on the road, two dodgy motels and way too many stinky chickens to count. Those were the highlights of our evacuation from Indiantown in southern Florida (it's near the east coast between Stuart and Lake Okeechobee) to Atlanta.

Okay, maybe highlights isn't exactly the right word. They were more like lowlights. Actually, lowlights is probably too nice of a description.

We had been monitoring Hurricane Irma's path for days, going back and forth as to whether we should stay or go. It became an easier decision once we saw this projected track and the "cone of uncertainty" on Wednesday. Indiantown Marina was smack dab in the middle of a major hurricane's path with projected wind gusts over 120 MPH. Yep, it was time to make plans to head on out. 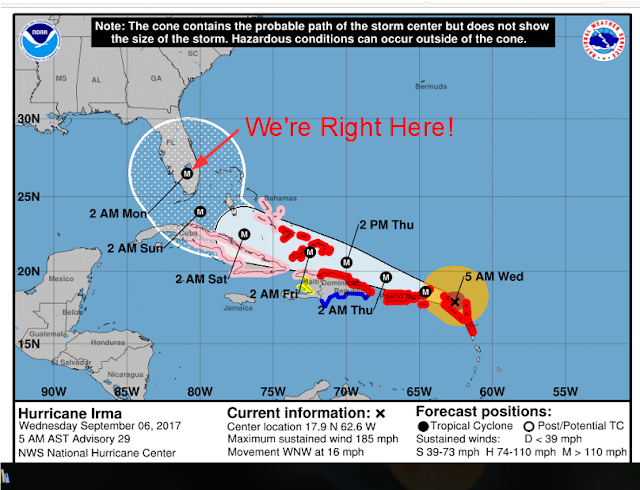 Before we could go, we had to finish prepping our sailboat, Tickety Boo, to ride out the storm.

If you're never prepped a boat for a hurricane, you're really missing out. You get to do all sorts of exciting tasks like taking down the sails so that they didn't become unfurled in the high winds, taking down our bimini and dodger (the canvas over the cockpit that protects us from sun and rain), making sure everything was off of the deck, tying a thousand lines and fenders to our boat to make her as secure as possible in her slip, getting the solar panel off, removing the steering wheel, filling up our water tanks and jerry cans and doing a million other jobs that always took longer than we thought they would.

Not to mention we were working in hot, sticky weather with real feel temps over 100 degrees, while constantly swatting at bugs intent on extracting every last bit of blood from our bodies. Maybe that's how they prep for hurricanes. Humans stock up on food and water, they stock up on blood.
Good times. 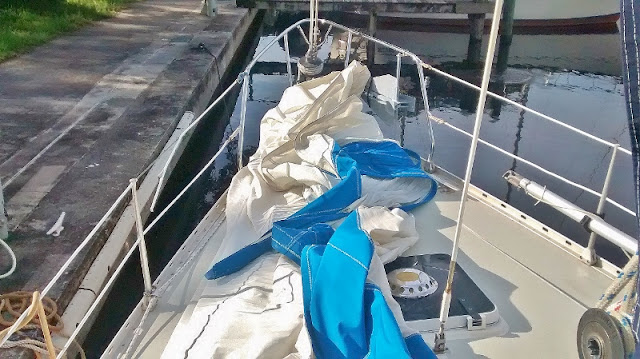 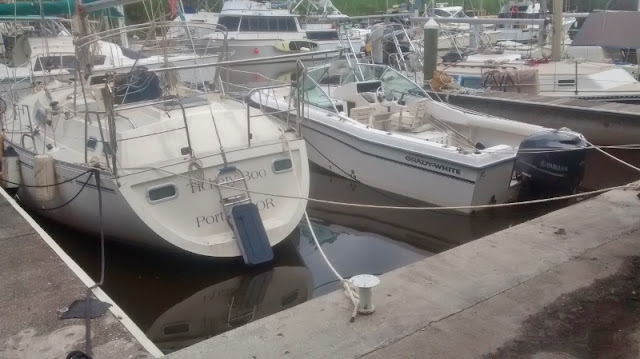 We checked on some of our friends' boats which are stored on the hard. They're tied down with hurricane straps so that they don't topple over in the high winds. That's the theory at least. Nobody really wants to test it out and see if it's true. 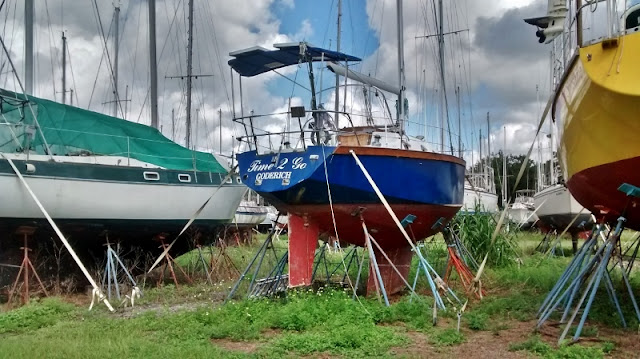 And the most important thing we did as part of boat prep was go out for a "last supper" with our friends from Sailing Wind Spirit and MJ Sailing on Thursday night. It's becoming a bit of a tradition. We did the same thing last year before Hurricane Matthew. To be honest, it's the kind of tradition I'd rather not have. 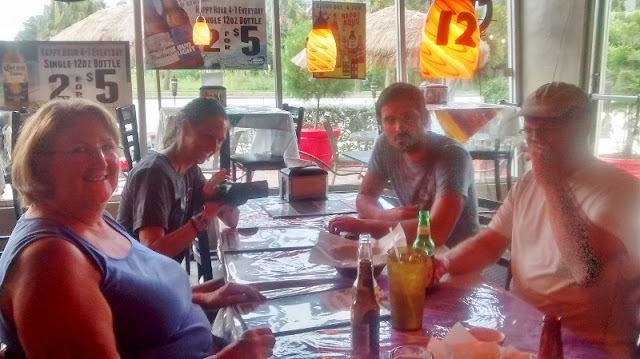 We got up at 3:00 AM on Friday morning and did some final boat prep. Then, after saying one last goodbye to Tickety Boo, we headed off at 5:00 AM northwards. Our goal was to go northwest, into the Florida panhandle and out of the cone.

At first, the evacuation seemed to be going okay. We drove west on the back roads to Okeechobee then up to Sebring and then on Route 27 up towards Minneola. Not too much traffic, gas readily available and no stinky chickens.

But then things went downhill from there. We made the fatal mistake of getting on the Florida turnpike over to I-75. Did you know 6.3 million people were ordered to evacuate? That doesn't even include people like us who voluntarily chose to evacuate. That's a lot of people on the roads. I think we met half of them on I-75. It was pure insanity.

Needless to say we got off of I-75 near Ocala and got back onto the backroads. That's when we started to notice some serious gas shortages. We were still okay for gas, but it's a bit nerve wracking to wonder when and if you'll be able to fill up again. 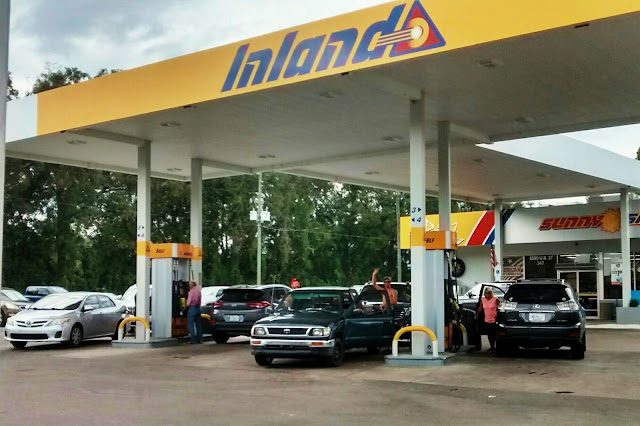 Some of you know that we have a tiny travel trailer, Scamper and have asked if we took her. We hemmed and hawed about what to do. If we left her at Indiantown, we could lose not only our boat, but our camper and have no place whatsoever to live. But if we took her, we'd really have to worry about gas towing her. In the end we decided to leave her behind. Given the gas shortages, it was probably a good call.

The backroads worked for a while and we were zipping along, singing songs and having a great time. That might be a bit of an exaggeration - there wasn't any singing or having a great time, but we did go faster. Then we got on Route 98. It took us 1 hour and 20 minutes to go 5 miles. {Sigh}

By the way, one disadvantage of taking the back roads is that you might find yourself stuck behind a truck carrying lots and lots of chickens. We've got the old fashioned kind of air conditioning in our car - you know the kind that involves rolling the car windows down. Nothing quite as refreshing as getting a big whiff of a chicken truck as you're driving along. Turns out chickens don't smell great, especially when its really hot outside. 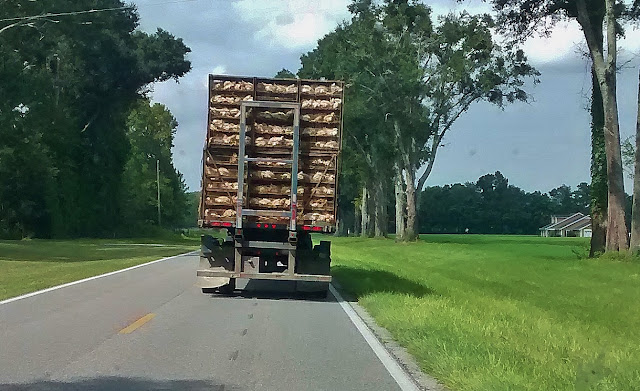 By the time we got to Live Oak, we were shattered beyond belief. We were desperate for a place to stay. Then we spotted a motel on the side of the road. There was a reason why they had rooms available - it was dodgy and gross. We decided to pass and keep on heading west into the panhandle.

We took Route 90 into Monticello. A super cute town. If only we weren't trying to flee from a hurricane, it would have been fun to explore. We ran across yet another dodgy motel. We checked out the room and it was gross, but for some reason, we handed the guy $60 and said that we'd take it.

Big mistake. One of the clues should have been the fact that you have to hand your money through a hole in the window. The other big clue was the fact that they normally rent rooms by the week or the month.

We dropped off some stuff and went for some fine dining at Burger King. When we got back, I noticed the owner was evicting some of the residents. Um, yeah, another big clue. Then we looked at the room more carefully and took the bedspreads off. What we saw took gross to a new level. Plus, to be honest, I was a little scared our car might not be there in the morning. We fled the scene and kept driving.

By this time, the cone was shifting west into the panhandle so we decided to go north into Georgia. We contacted some friends of our who had offered us a place to stay in Atlanta and asked them if there offer was still good. Thankfully, it was.

We took the backroads to Tifton and then got on I-75. There were times that we were going 60 MPH and then there were times we were lucky to be going 5 MPH. But in the end we made it to Atlanta and collapsed in a heap grateful to have a safe place to sleep.

1 - A dodgy motel is never a good idea no matter how exhausted you are.

But more importantly, we were reminded of how lucky we are. Sure, we could lose our sailboat and our camper, but we have the financial resources and a car and were able to evacuate and great friends who were willing to shelter these Florida refugees. There are so many other people who have been impacted by Irma, with no place to go and so many people whose lives have been devastated by her wrath.

Have you ever stayed at a dodgy motel? What's the longest you've driven? Have you been impacted by Hurricane Irma?

NOTE: If you've emailed or left comments on Facebook or our blog, apologies if I haven't responded. The last several days have been crazy and exhausting. I'll try to get around to it soon.