Things That Go Bump In The Night

After two sleepless nights, I was looking forward to a quiet, restful sleep. The first night I had been woken up at midnight due to a boat coming into the slip next to me, followed by a tree frog running loose inside my boat. The following night was when Hurricane Matthew was threatening to make landfall nearby. Sleep is pretty much impossible when you're waiting for massive destruction to take place.

After all of that drama, I tucked myself in bed early, read for a while and drifted off to sleep. I was having a really pleasant dream about kittens and unicorns frolicking in a meadow dotted with colorful wildflowers. It was a great dream. Then the kittens started hissing and scurrying for cover. The unicorns started panicking and making a screeching sort of neighing sound.

I looked around and saw the cause of their distress - a giant spacecraft with bright shining lights had just landed in the meadow and was about to abduct the kittens and unicorns and conduct all sorts of horrifying experiments. Did you ever wonder why you hardly see any unicorns around these days? Yes, that's right, the aliens rounded them up and took them back to perform in what passes for rodeo shows in their galaxy.

Suddenly, I realized I wasn't dreaming. I woke up to see bright lights shining through the windows in my aft cabin. Now I was starting to panic. The aliens weren't coming for the kittens and unicorns. They were coming for me!

I quickly opened the companionway and looked out just in time to see a car crash into the power pedestal right next to my boat.

Here, let me show you what I mean. 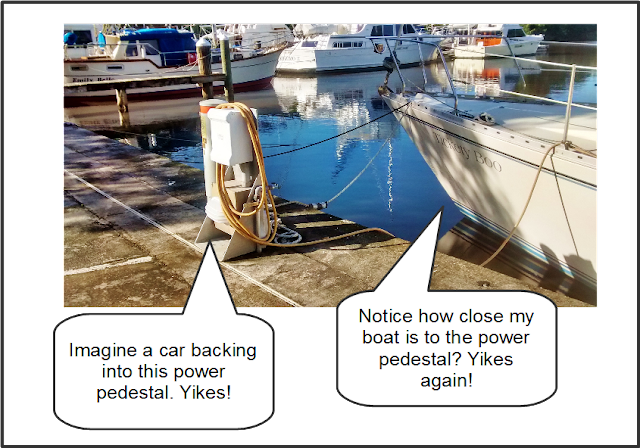 I screamed some very naughty words at this point.

A man got out of the car and seemed totally unfazed by what had happened. I asked him if he was all right. He said he was fine, but the way he was moving and talking made me think that perhaps he wasn't fine and shouldn't be driving. I couldn't be sure if he was drunk or on drugs and I got a really bad feeling about things.

He moved very slowly to inspect his car and asked me if I wanted to come check things out. I declined. The last thing I wanted to do was get close to this nutter-butter, so I stayed on my boat.

I asked him what he was doing down by my boat and he told me he was lost and trying to find his way out. This was weird on so many levels.

There's a grassy area near my boat that has a little workshop area. Cars sometimes park there when they're unloading stuff. It's also a good place to lay out your sails. There's a track which goes up to the point overlooking the canal. Normally, it would be pretty straightforward to drive your car there.

But these weren't normal times. There were boats stored on the hard in the parking lot in preparation for Hurricane Matthew which made it difficult to see that you could drive into there. There was also a lot of equipment and wood blocks near the grassy area which created a bit of an obstacle course to drive through. Somehow, this guy managed it. 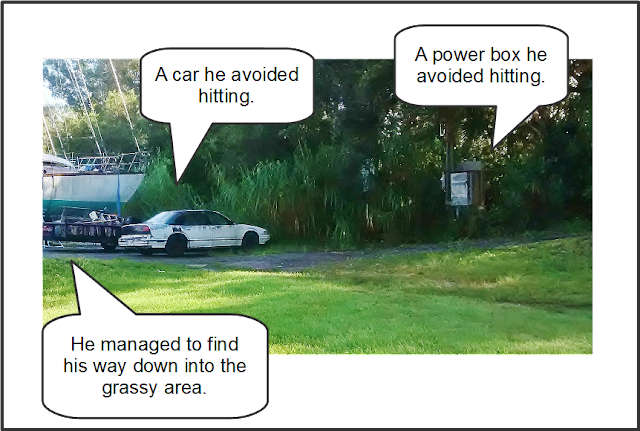 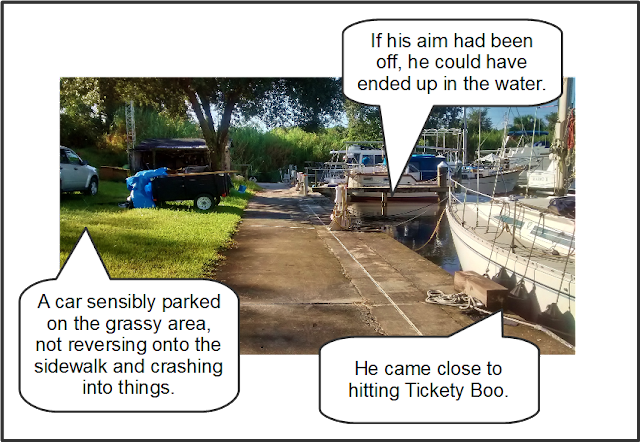 I suggested that he contact the marina in the morning in case there was any damage. He told me that he wasn't worried as his fender was indestructible. Not exactly what I meant. Then he drove off.

Somehow, I had the presence of mind to memorize his license plate number. Which is truly astonishing as I can barely remember my cell phone number. I went back down below, noted the time (2:45 AM), wrote down the license plate number, tried to calm down and was trying to decide what to do when I saw more lights.

Great. The lunatic was back. I grabbed my phone so I could call 911 when I noticed that it was one of the sheriff's deputies on routine patrol. Phew! I waved him over, told him what happened and gave him the license plate number.

The next day, I told the marina staff what happened and they came down to check out the damage. I later heard through the grapevine that there had been some guy who got really drunk at the bar that night and was picked up by the sheriff's deputy after his escapade at the marina.

I used to complain about the turtles who always bang against the hull of my boat during the night, but I'll take their little bumps in the night anytime over someone almost crashing into my boat.

Have you ever had someone nearly crash into you or your home? What would you have done in this situation?