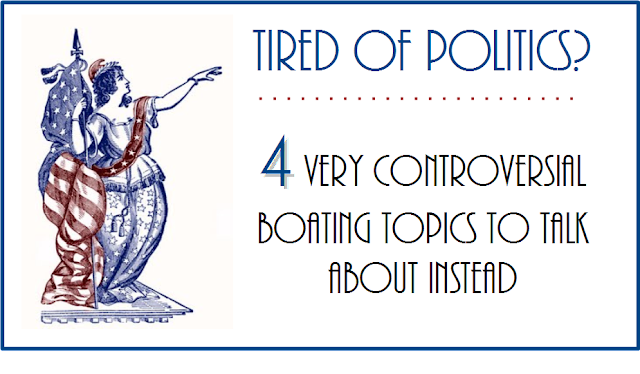 I don’t know about you, but I’m kind of over the whole American presidential election cycle. I can’t seem to get away from it – bumper stickers on cars, people posting their thoughts on Facebook, television coverage and ads etc. This is the first presidential election I’ve been in the States for since George W. Bush vs. Al Gore in 2000 (we moved to the UK in 2001 and then to New Zealand).

Having been an expat for so many years, I’m not sure if this is a normal cycle. It’s hard to imagine it is normal considering many Americans are planning on voting less for a particular candidate and more for a candidate who they don’t really like, but think they can stomach better for the next four years.

I try to avoid discussing politics with other folks, unless, of course, I know in advance they share the same views with me. Then, I’ll happily chat for hours about it because there’s nothing better than hearing other people tell you your views are 100% correct. No one really wants to hear that someone disagrees with them. Especially, when disagreement can get so disagreeable, as it has during this cycle.

So, if you’re tired of talking politics and want some surefire ways to change the conversation, give these boating scenarios a try and see how people answer (some of them work for RVers too). Although, be warned, some of the discussion may get really heated, possibly even more heated than talking about who’s running for office.

Imagine you’re doing laundry at the marina. You’ve put a load in the washer, sat by the machines with a book and waited for it to be done. The spin cycle finishes and you go to put your laundry in the dryer. Except there’s a pile of clothes already sitting in the dryer. They’re completely dry and nobody has come to claim them in the thirty minutes you’ve been sitting in the laundry room. Do you:

A - Wait patiently for the person to come back and take their clothes out of the dryer.

B - Take their clothes out of the dryer and put them in a heap on top of the machine.

C - Take their clothes out of the dryer and fold them neatly, including their knickers.

D - Save some quarters - take your wet clothes back to the boat and hang them on the lifelines to dry.

Too Much Noise, Not Enough IPA | Generators

Imagine you’re anchored in a lovely spot, sitting in the cockpit of your boat and indulging in a particularly hoppy IPA. Another boat anchors nearby and cranks on their very loud generator. After your third IPA, they’ve still got their generator running. When you get up in the middle of the night to go pee (perhaps too much IPA?), they’re still running their generator. It’s so annoying that you’re thinking about having another IPA, but you’re all out. Do you:

A - Shrug your shoulders, put ear plugs in, go back to bed and dream about IPA. It’s a free country and they can run their generator if they want.

B - Shine a spotlight on their boat and blow your air horn over and over again. Two can play this game.

C - Go over the next morning in your dinghy and politely ask them if they wouldn’t mind turning the generator off at night.

D - Move your boat to another anchorage to get away from the noise.

Is Two Of Something Better Than One? | Catamarans vs. Monohulls

Your friends have decided to buy a boat and ask you whether you think they should get a catamaran (a boat with two hulls) or a monohull (a boat with one hull). Do you:

A - Tell them catamarans are definitely the way to go. They don’t heel over and get all tippy, they’re generally more spacious and they’re called “cats” for short. You’re a bit of a #CrazyCatLady, so anything related to cats is the way to go in your books.

B - Tell them to get a monohull. Catamarans are for sissies and if something bad happens and it turns upside down in the water it won’t turn itself back over, unlike a monohull.

C - Tell them to get an RV. Why would you want to live on anything that might turn upside down in the water?

D - Tell them to get a trimaran. They’ve got three hulls. The more hulls the better.

Fun With Furry Creatures | Pets On The Loose

People at your local marina let their cats roam freely. Sometimes the cats get onto your boat and start poking around, even occasionally jumping down into your boat through the open hatches. Do you:

A - Pet them and give them cuddles.

B - Run out to the store and buy cat treats to feed them.

C - Clear off a spot on the settee so that they can take naps.

D - When the cats’ humans come looking for them, hide the cats in the v-berth and pretend you haven’t seen them. When the humans go away, let the cats out and give them more treats and pets so that they never want to leave your boat.


What answers would you pick? How do you change the subject when someone is talking about something you’d rather not discuss?