Safety Tethers | Save Money By Making Your Own. Maybe.

A word of warning. If you’re not into boating, then you’ll find this blog post extremely boring. You’d be better off shutting down your computer and doing something more fun like sharpening pencils with an emery board. Even if you’re into boating, you may find this dull beyond belief. I know my eyes always glaze over and I start to search for pencils in need of sharpening when I read detailed blog posts and articles about boat equipment.

But, as safety tethers are designed to save your life (at least that’s the theory and even that’s up for debate), this might be worth a read if getting a new tether is on your list of “extremely dull but important things” to do and you’re pondering what kind to get and whether you should make it yourself.

If you do decide to carry on and read this, go get a snack first. It’s long. Really, really long.

A Safety Tether Could Save Your Life. Maybe.

So here’s the deal – sailing can be dangerous in far too many ways. I try not to think about it too much because dwelling on my fears causes me to eat too many chocolate chip cookies. But, occasionally I have to put the cookies down and think about dreadful stuff - like one of us falling off of the boat, floating away and drowning.

One of the ways to prevent this is to be tethered to your boat. A tether is basically a leash which is attached to a harness that you wear (either integrated into a PFD, aka personal flotation device, or separate) and then attached to the boat. If you fall off the boat, you’re still attached to it which makes it easier to get you back on the boat. After an ordeal like that, you’ll definitely be needing a whole bag of chocolate chip cookies.
The key takeaway is that a tether can save your life. Except when it doesn’t.

The Controversy Over Tethers. Fortunately, Not As Controversial As Gun Control.

In 2011, Christopher Reddish, a well known sailboat racer went overboard during a nighttime sail change and drowned before he was retrieved. He had been wearing an integrated PFD/harness and a tether. One of the contributing factors to his death was the length of his tether which allowed him to be washed overboard where he was dragged along the side the boat while his head slid underwater.

Since this accident, some people have argued that if you go overboard, you’re more likely to survive if you aren’t tethered to the boat. Personally, I still think tethers are a critical piece of safety equipment. What’s important is to use a short tether to ideally keep you in the boat or if you do go overboard to keep you out of the water as much as possible.

Okay, enough controversy. How does a tether work anyway? Let’s dissect one and see. We’ll use the one our boat came with as an example - a 6’ (2m) long West Marine Standard Safety Tether. 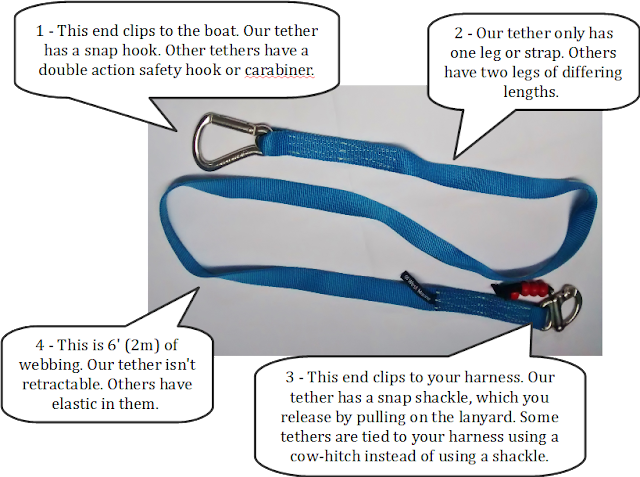 Here’s what to look for:

1 – The end that clips to the boat – snap or double action safety?

I like having two legs attached to my body and I’d prefer if my harness came with two as well. The beauty of having two legs is that you’re always attached to the boat. One leg stays clipped to the boat while you move about and clip the other leg to another point on the boat. The other advantage of having two legs is that one can be longer than the other (obviously not ideal when it comes to human legs, but we’re talking tethers here). It’s safer if you use the shortest length possible. You can use the shorter leg when you’re up on the foredeck or attached to something stationary and the longer leg when you’re moving about the boat.

3 – The end that clips to your harness – snap shackle or cow-hitch?

Some tethers are clipped onto your harness with a snap shackle which you pull open by the lanyard. Others are tied on with a cow-hitch, which can only be released under load by cutting it with a knife. I’m sure there are advantages to using a cow-hitch, but if I fell overboard I don’t think I’d have the presence of mind to cut the tether, assuming I had a knife with me (although our Spinlock PFDs have integrated harnesses and an emergency knife).

It’s Time For A New Tether, Don’t Take It Personally.

While our West Marine Standard Safety Tether is a lovely shade of blue, it has some issues. In addition to using a snap hook to attach to the boat, only having one leg and not being retractable, it also isn’t compliant with the International Sailing Federation (ISAF) standards due to the lack of a built-in stress indicator. When your harness is stressed to the point of needing a replacement, a flag is exposed so that you know you need to get a new one. This isn’t the kind of stress that comes from working long hours and then coming home to crying children. It’s what happens when there's too much load placed on the tether which will cause it to break. There wouldn't be enough chocolate chip cookies in the world to make that situation any better.

Geez Louise. These Things Are Expensive.

Okay. So, we all agree. A new tether is needed. Ideally, two new tethers are needed – one for each of us. We do have another tether that we brought back with us from New Zealand which is better than our West Marine one, but it only has one leg and I'd prefer to have two two-legged ones. But, goodness gracious, some of these tethers are so expensive! To give you an idea, here are some of the ones I looked at:

This is the one we currently have which sells at West Marine for $114.99. It doesn’t have the features we want and isn’t ISAF compliant, so we won’t be buying another one of these, but it’s a good reference point in terms of cost.

Another West Marine product, this one will set you back $179.99. It ticks the right boxes – ISAF compliant, two legs (one short and one long, both of which are retractable), a snap shackle at the harness end and double action safety hooks at the boat end.

This retails for $339.30, but you can pick it up for $190.99 at Defender. It’s ISAF compliant, has two legs (one fixed 3’ (1m) line and one retractable 6’ (2m) line), a snap shackle at the harness end and fluorescent double action safety hooks at the boat end. Wichard has a good reputation for their marine hardware, which is reflected in the cost of this tether.

After looking at the prices of the Wichard tether, I was feeling a bit faint. Then I read about the Kong tethers, which are based on mountain climbing technology. These are a lot cheaper – you can pick up a Kong harness with two retractable legs (one short and one long) for $81.55 at Jamestown Distributors. It’s ISAF compliant, has a snap shackle at the harness end and double action Kong Tango carabiners at the boat end. Anytime you add marine to the front of any product name, the price goes sky high. Could the Kong tethers be cheaper because they didn’t start out as marine products?

Rather than buy a ready made harness, I thought I could save some money by making my own. So when I saw that I could get a kit from Sailrite for tether for only $66.95, I got excited. But is it too good to be true? This kit comes with the webbing and elastic you need (one leg is retractable and one is fixed), plus one Suncor snap shackle for the harness end and two Suncor carabiner hooks for the boat end. Because it uses carabiner hooks instead of double action safety hooks/carabiners, I’ve scratched this off my list as an option as the carabiner hooks can accidentally release. The quality of the Suncor hardware is also a question mark as it is cast as opposed to forged, like Wichard. Forged stainless steel is stronger and will deform before it breaks.

But, I Can Still Get Crafty With My Sailrite.

Making your own tether looks dead easy – check out this Sailrite video to get an idea of what’s involved. I don’t need a kit to make my own – all I need to do is source the components separately. The 2” tubular webbing, 1” white elastic and 2” tape are straightforward buys. The real challenge is around what hardware to use and this is where the costs start to mount up.

Here’s the numbers for all you nerds out there. (Note: I already have tape, thread and needles so they’re not included in the pricing.)

THE SCOOP…It would be worth making my own to save $30. I don’t think the project would take long and I have the time to get crafty with tether making. But, is going with Wichard hardware worth it?

THE SCOOP…I’m not sure what type of shackle they use for the Kong tether, but it has to be a relatively inexpensive one to be able to sell a ready made tether for $81.55. They could be using a Kong 57mm snap shackle, but I couldn't easily find a US dealer of this. I priced this out using a Suncor snap shackle, which enabled me to get the cost down to less than it would cost to buy a ready made one – but, only by $2.56. Given the fact that there would be shipping costs for both the Kong Carabiners and the Suncor Snap Shackle and the fact that the price I got for the snap shackle is a closeout price at Defender and they might sell out, the savings isn’t really there. It would be cheaper to buy a ready made one. But, what’s the quality of the Kong hardware like? Are there any safety issues? Why is it cheaper than the Wichard stuff? These are the types of questions that keep me up at night.

So, What Do You Think?

What kind of safety tether do you have (or are thinking of getting?) Have you made your own? What do you think about the Kong vs. Wichard tethers? What would you do? Have you had any chocolate chip cookies or brownies today? If not, why?

If you just can’t get enough technical talk about tethers, here are some articles you might want to check out.