I love tea towels (or dish towels in Americano). There's nothing quite as comforting as a pile of freshly laundered and neatly folded tea towels. I don't know why, but they make me feel like I can cope with anything that comes my way.

Okay, maybe they wouldn't be much help in sorting out a broken diesel engine or surviving an alien invasion from outer space, but they're awesome at wiping up spills. I'm klutzy. I spill things all the time. And, if the aliens ever do invade, I'm pretty sure I'd spill my glass of red wine absolutely everywhere in all the excitement and then I'd turn to my stack of trusty tea towels to save the day.

The previous owners of our boat left behind quite a few tea towels. They're nice enough and are up to to the task of cleaning up wine spills, but they lack any real pizazz. So, you can imagine how excited I was when fellow Moody 346 owners, Guy and Sylvia from Pura Vida, gave me this awesome tea towel, when they were at Indiantown Marina a few months ago. 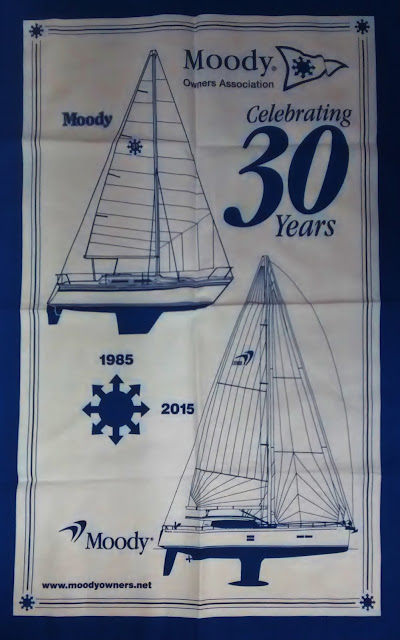 This is a very special tea towel, honoring the 30th anniversary of the Moody Owners Association or MOA (complete unrelated to the Moa Preservation Society, which Scott and I founded a few years ago.) Guy and Sylvia told us that it would be well worth joining MOA. When Karen and John of Pascal, another Moody 346, popped by Indiantown Marina for a visit a month or so ago, they also mentioned that it would be a really useful group to join.


Who am I to argue with my fellow Moody 346 owners, especially ones as nice as these guys? So, we forked over £20 (around US$29) for an annual membership and joined hundreds of fellow Moody yacht owners in this exclusive organization.

Only Moody owners can join, which makes it kind of neat. You feel like you're part of a special club. I had hoped there was a secret handshake that Moody owners gave each other which signaled something like, "Greetings Sister, I shake your hand in Moody solidarity." But, when I shook my fellow Moody 346 owners' hands, they were ordinary handshakes. Good, solid and firm handshakes, but pretty ordinary.

Then I realized it was the tea towel that sets Moody owners apart, not a secret handshake. That's how you know a fellow Moody owner when you see one - it's the tea towel. Of course, you'd probably find their tea towel on their Moody yacht, but the tea towel is what really confirms it.

Now, I just have to figure out what to do with my MOA tea towel. It seems too special to use for the actual drying of dishes and wiping up of spills. Maybe I'll turn it into a fabric bag which I can store clothes and bedding in, like my bloggy pal Melissa at Little Cunning Plan recently did.

Well, that's enough for now. I need to put a load of laundry in. I've got a pile of dirty tea towels that need washing. For some reason, there's red wine stains on a bunch of them. Completely unrelated to an alien invasion. Oops. On the bright side, those Spartan green fleece slipcovers I made last year see resistant to stains.

Do you belong to any clubs or organizations? For those of you with boats, have you ever met the owners of your sister ships?

Posted by The Cynical Sailor at 9:41 AM

Email ThisBlogThis!Share to TwitterShare to FacebookShare to Pinterest
Labels: Moody 346