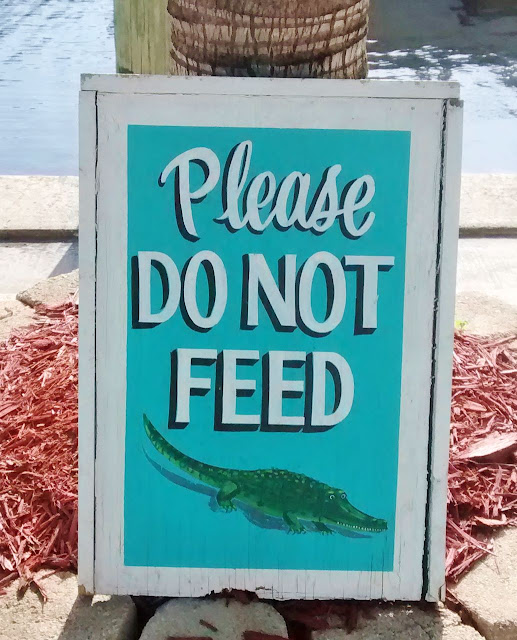 One of the nice things about living in a marina in southern Florida is watching the wildlife from my boat. I can see fish jumping in the water, turtles tapping on my hull and the occasional manatee floating on by. I can also see alligators swimming around my boat, which is both thrilling and scary at the same time.

I’ve actually gotten pretty used to seeing alligators lurking about. I figure if I leave them alone, they’ll leave me alone. Seems sensible, doesn’t it?

Apparently, not everyone shares the same philosophy. Some people at the marina had been feeding the resident alligators. That’s not really my definition of leaving them alone. Once you start feeding alligators, they lose their fear of humans and then they can become a big problem. A really big problem. The kind of problem with really sharp teeth that thinks a small dog or cat would be a delicious snack and that a 5 year old child would be a tasty supper.

So, it was time to call in the alligator trapper to deal with the problem.

I was walking back from the shower when I heard someone ask some of the kids running around the dock if they had seen the alligator being trapped. My ears perked up. Sure, I was eavesdropping, but this is why one should eavesdrop on a regular basis – it’s how you find out about exciting stuff happening, like alligator trapping.

I dumped my shower bag off on my boat and made my way over to see what was happening.

Turns out that I missed Fred being trapped. Fred is the smaller of the two alligators that made their home at the marina. Fred is a good name, don’t you think? My bloggy pal from S/V Smitty, who was here doing some work on their boat, named him Fred when she saw him swimming near the docks.

But, I did get to see the second half of the show, when the really big guy was trapped. He doesn’t have a name. I’m thinking Gus or Maurice.

It was actually a long and complicated process. The trapper hooked the alligator with a fishing line with a float on it and then tried to reel him in. Gus (I decided to go with Gus) was a clever chappie and swam over to the bank where he snagged the line around a tree root or something.

So, the trapper hung out and waited. I got bored and hot and went back to my boat for a snack and some sunscreen. When I came back, the trapper tried reeling him in again and the line broke. Then he hooked the line with another pole and went at it again.

“Are you relocating them?” I asked, while cautiously looking over the side of the dock to make sure that Gus hadn’t snuck under that when we weren’t looking.

“They’re going to be taken to an alligator farm,” the trapper said as he reeled the alligator in towards the dock.

I had visions of an alligator farm being a well fenced in area full of swamps for the alligators to frolic in and grassy banks for them to nap on in the afternoon sun. It seemed ideal – the alligators would live out their lives in a peaceful sanctuary and people could let their kids play and safely walk their dogs and cats along the docks at the marina without worry.

What I didn’t realize until later was that the trapper didn’t say that he was relocating the alligators, just that he was taking them to the farm. There’s a difference. Relocation, in my mind, is like the witness protection program. You go someplace new, leave your past behind and are safe from people who wish you harm. Taking them to the farm is entirely different. It’s a place where you farm alligators for their meat and skin. Sure, the gators went someplace new, but they weren’t safe from harm.

Turns out that Florida has a “healthy and stable” alligator population (1.3 million alligators live here!) and, as a result, nuisance alligators aren’t relocated. If you did try to relocate them, the alligators already living there would get pissed off and everyone would start fighting. Plus, alligators will try to return to their home base and be all that more difficult to trap again. When you read the Florida Fish and Wildlife website, it makes sense in a logical sort of way. Although, as we all know, logic can be overrated.

I’m kind of glad that I didn’t know on the day what the future had in store for the Fred and Gus. It probably would have made the day a bit less exciting and a bit more sad.

But, nonetheless, it was fascinating to watch as the trapper got Gus up to the side of the dock and, with the help of another guy, got a grappling hook onto him, hauled him up on the dock and sat on him to tape his mouth shut. I kept my distance while this was going on, naturally. 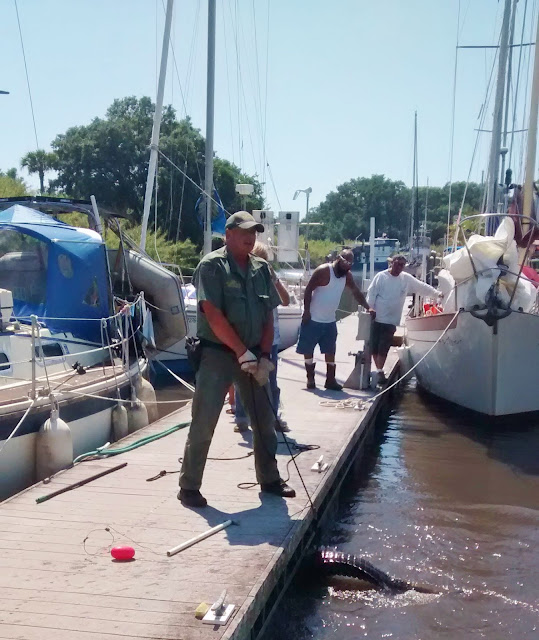 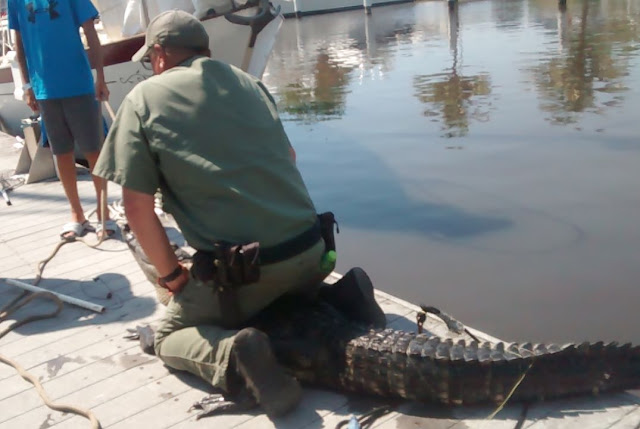 Then, they “walked” the alligator down the dock and over to the grassy area, where the trapper took a well-deserved rest (after all Gus was over 5’ in length and around 150 lbs, which wouldn’t have been easy to wrestle with), while we all gawked at Gus. 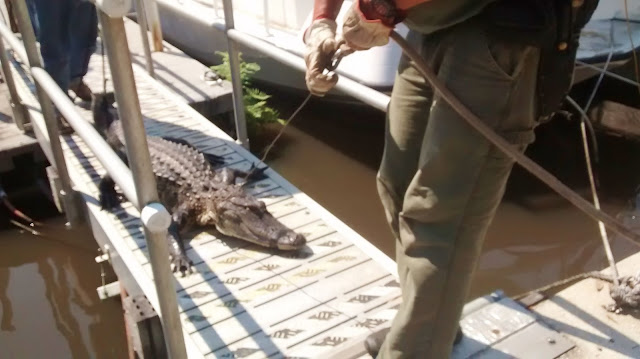 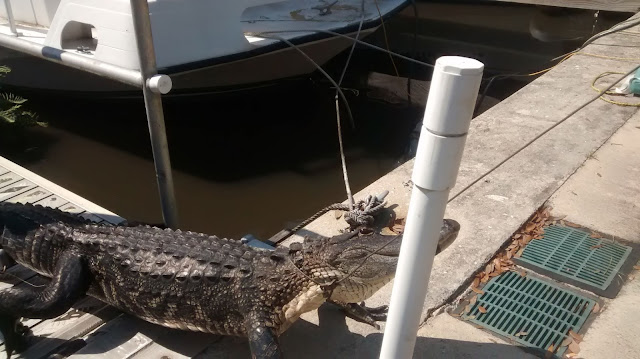 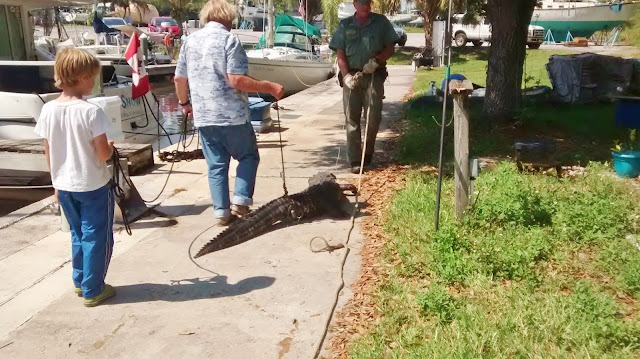 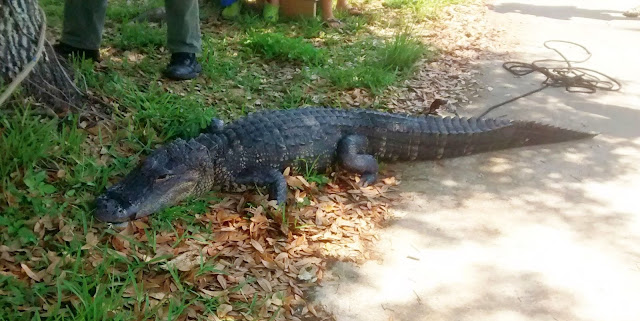 I’m keeping my eyes open, because I’m pretty sure some other alligators will move into this territory. Hopefully, nobody feeds them this time.

Have you ever seen an alligator (or crocodile) close up and personal? What do you think about alligator trapping and farming?