Mingling With The Posh Crowd At Highbourne Cay Marina, Bahamas

I have a confession to make - we're not very posh people.

I guess that really isn't a confession. It's not like I revealed one of my deep, dark secrets. To hear one of those, you'd have to offer me a few glasses of champagne first.

It's more a statement of fact. Anybody who has met us would agree. We're not posh. We don't have fancy clothes or fancy cars, I haven't had a pedicure in ages and I can't remember the last time I had a glass of decent champagne.

I've worn the same outfit for more days in a row than I'd care to admit. (If I told you exactly how many days, that would be a confession.) I have a Yengling beer for my nightly sundowner. Not exactly a champagne flute full of Veuve Clicquot. And I live on a 34' sailboat, not a mega-yacht. Oh, and don't look at my toes.

I'd kind of forgotten how non-posh we were until we anchored outside of Highbourne Cay Marina among all of the mega-yachts.

We dinghied over to Highbourne Cay marina in search of the essentials - diesel, water and milk.

The folks on the mega-yachts send their crews over in search of the essentials - champagne, caviar and OPI nail polish.

This is where you dock your dinghy at Highbourne Cay. It's a nice dinghy dock. No boards rotting with termites which you're worried are going to crumble underneath you. No rusty nails sticking out threatening you with the excitement of tetanus. 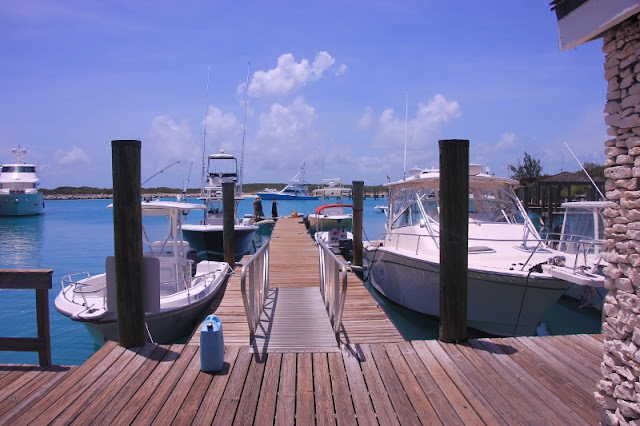 Another snap of the marina's snazzy docks. See our blue water jerry can on the left hand side? 50 cents a gallon for RO (reverse osmosis) water. We don't have a watermaker on our boat, so we have to buy water. 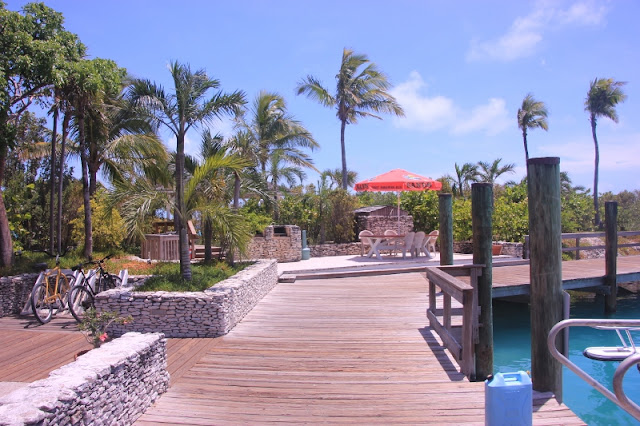 There was dock space available, but we're too cheap to stay at marinas, especially when there's a perfectly good anchorage nearby. 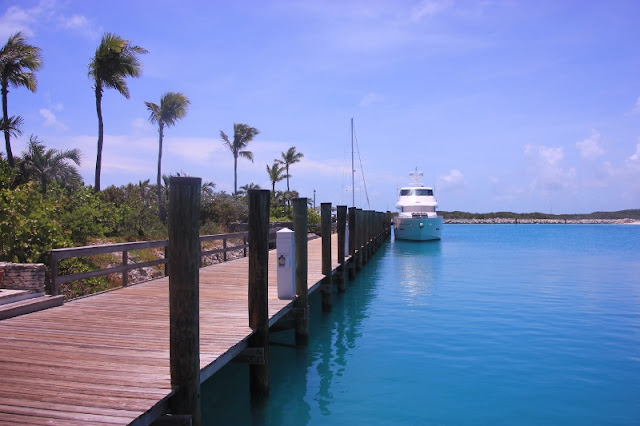 Highbourne Cay is privately owned and if you want to explore the island you have to pay $25 per person per day. I think the fee helps keep the riff-raff out. You know, folks like us. It looked lovely, but we opted to go back to our boat instead and start planning for our visit to the Exuma Land & Sea Park. 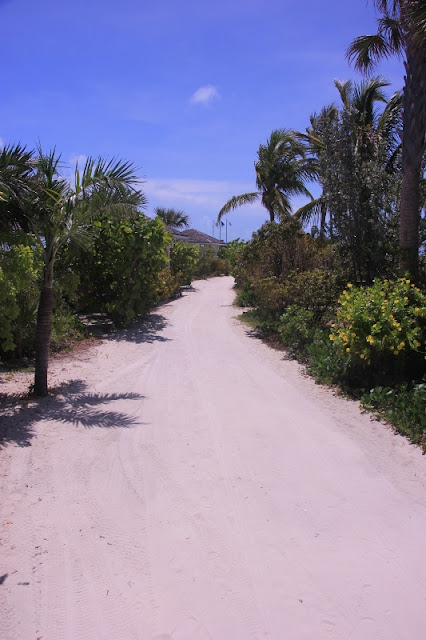 We did check out the marina store. We had hoped for fresh milk, but all they had was chocolate. Seemed like kind of a strange milk variety to stock on an island in the Bahamas. But maybe the folks on mega-yachts have a real hankering for chocolate milk. There weren't prices on anything. You know how the saying goes - if you have to ask, you probably can't afford it. 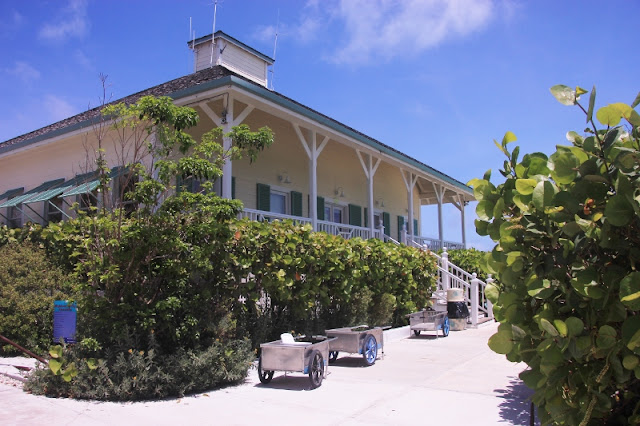 My favorite part of the visit was seeing all of the sharks and stingrays hanging out at the pier looking for handouts. When I asked one of the fuel attendants what kind of sharks they were, he told me to jump in, tickle one on its neck until it opened its mouth and then I could tell by its teeth. I decided not to take him up on his suggestion. 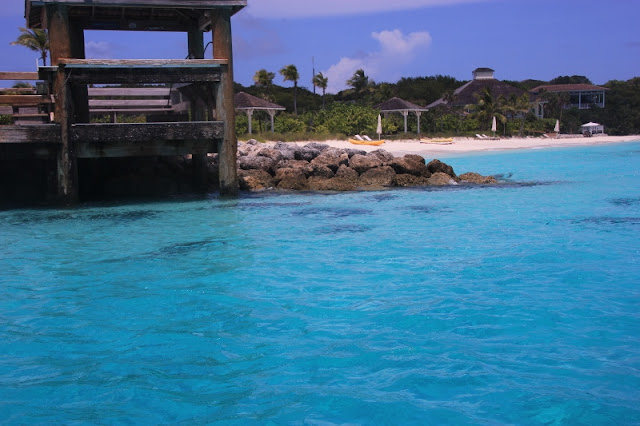 After getting our fuel and water, we headed back to Tickety Boo for sundowners in the cockpit drinking cans of cheap beer and hoping the folks from one of the mega-yachts might stop by to offer us a bottle of champagne.

30 MAY
Had the absolute worst night ever at Rose Island (near Nassau). The most roly-poly anchorage we've ever experienced. I thought one of us was going to flying out of the bed onto the floor. Anchor up at 7:00 AM. Very slow passage - beating into waves and wind. No breakfast or lunch was served which made for an unhappy skipper and crew. Anchor down at 5:15 PM at Highbourne Cay in the Exuma Islands. Nautical Miles = 42. Engine = 9 hours 30 mins. Spending = Nil

31 MAY
Did some planning for next destination - Exuma Land & Sea Park. Went to Highbourne Cay Marina for water and fuel. One of our lifelines broke. Glad it didn't happen while on passage. Nautical Miles = Nil. Engine Hours = Nil. Spending = $90.29 (5 gallons water & 20 gallons diesel).

1 JUNE
Anchor up at 10:45 AM. Beat into the wind all day. Very choppy. 20+ knots at time. Reefed mainsail and headsail. More stuff broke - furling line lead, zipper on bimini and loose connection on solar panel. Anchor down at Shroud Cay at 3:00 PM. Number of sailboats and mega-yachts at anchorage. Doesn't everyone know it's hurricane season? Nautical Miles = 20. Engine = 1 hour. Spending = Nil.

How much would you pay for a gallon of water? Would you tickle a shark on its neck? Do you consider yourself to be posh?