When you tell people you're going to go cruising on your sailboat in the Bahamas, here's what they way to you:

"The Exuma Land & Sea Park! You'll love the snorkeling the crystal blue waters and exploring the islands! You've just got to go there!"

And it's true the snorkeling is great and the islands are made for adventures. But what they don't tell you is how great the curry is there. Seriously, Shroud Cay is the place for chana masala in the Bahamas.

One tiny catch - you have to make it yourself. There aren't any restaurants on Shroud Cay, let alone Indian ones.

Fortunately, chana masala is easy to make. And more importantly, you can make it from canned goods. A very critical point when you're on a sailboat far, far away from well-stocked grocery stores.

I used my bloggy pal's (Lucy from the Larks of Independence) recipe, adapting it based on what we had on board Tickety Boo. She uses garam masala. I used Patak's hot curry paste instead. I also added some dehydrated bell peppers and then stirred in a container of plain Greek yogurt at the end. Takes the deliciousness level up a notch, if I do say so myself.

You know what's the best thing about chana masala? It even tastes good the next day straight out of the fridge for lunch. 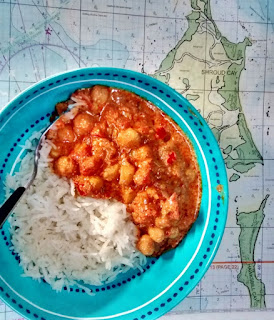 Of course it wasn't all stuffing our faces with curry. There was some adventuring to be had too.

We walked down the trail to the freshwater well. Seriously, that's a well. I know because there was a bucket nearby and water inside. 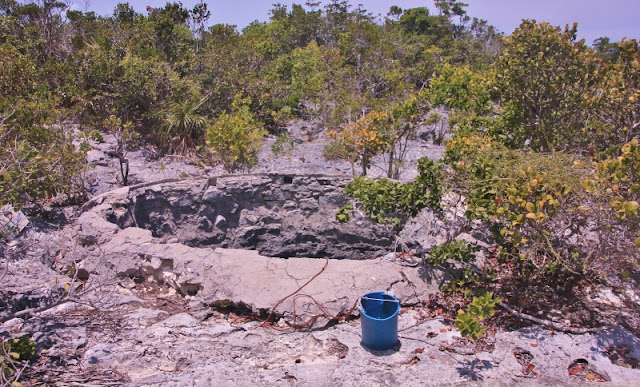 There was a sign which said "No soap or contaminants." Must be safe to drink, right? Scott looked at me in horror as I took a sip. "Don't you think that you should boil that first?" he asked. Oops. Maybe I should have. Good news is that I didn't get sick. 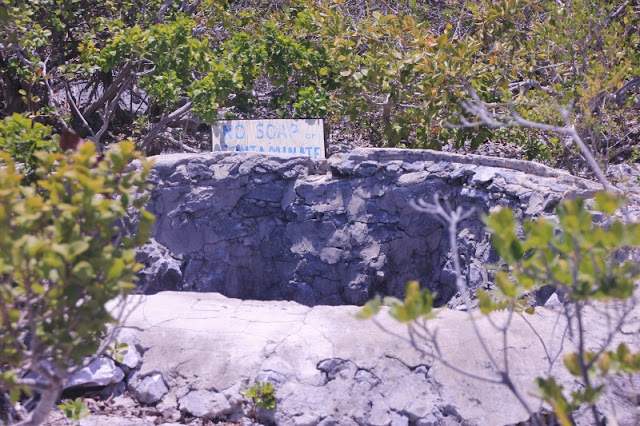 All the guidebooks say that when you're at Shroud Cay, you have to take your dinghy up Sanctuary Creek to the Atlantic side of the island. Who are we to argue? We got in our dinghy and motored slowly through the creek. After all, I needed to get some adventuring done before I ended up in the hospital with some sort of waterborne parasite I picked up from the well water. 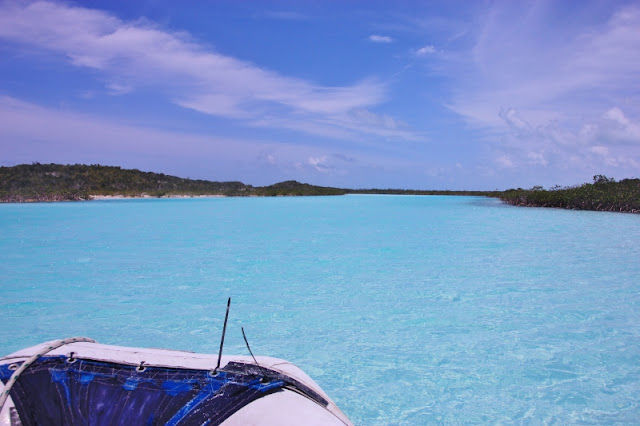 It's supposed to remind you of the movie, African Queen. It didn't, which is good because leeches feature heavily in that movie. Not something I want to encounter.

When you get to the Atlantic side, you can climb up the hill and check out Camp Driftwood. It was built in the 1960s by a sailor who lived in the creek on his boat. People used to bring offerings and leave them at the camp. Nowadays that's verboten. 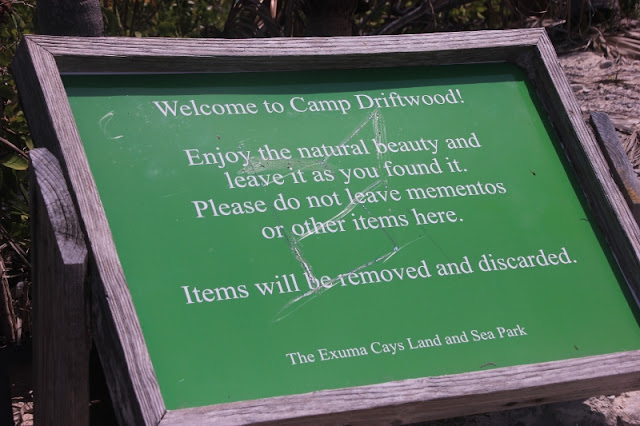 You can get a great view of the beach from the hill. People have told us it's the most beautiful beach they've ever seen. 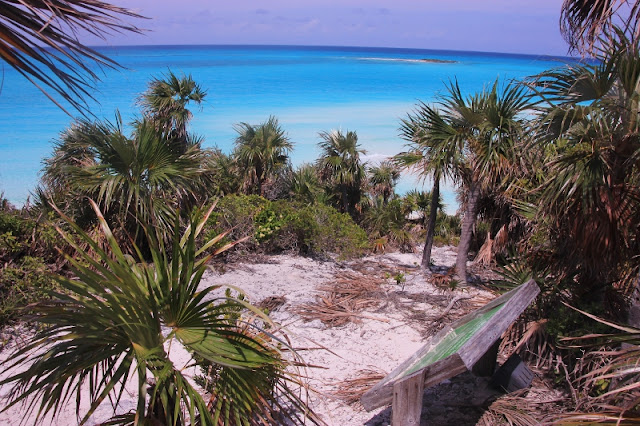 The next day we headed to nearby Hawksbill Cay. We had to work off that curry somehow, so we went for a walk and explored the ruins of an old plantation belonging to the Russell clan, Loyalists who settled this area in 1785. It amazes me that anyone can eke out an existence in such a bleak, rocky and barren environment, but I guess they made it work. 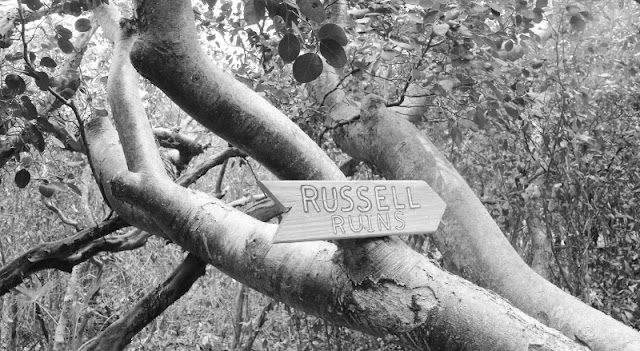 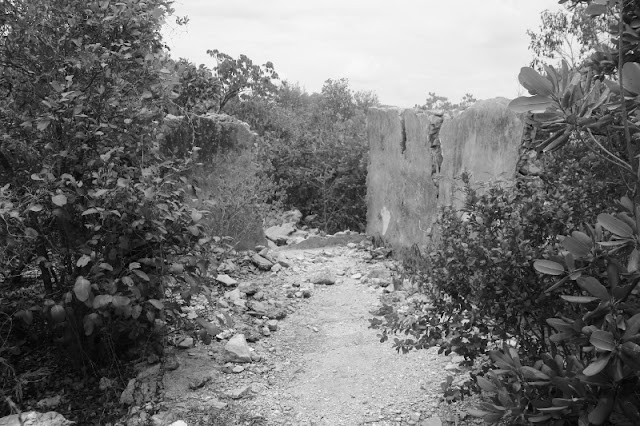 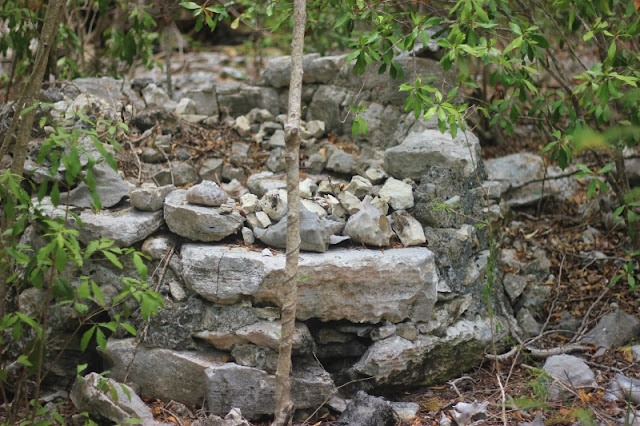 3 JUNE
Anchor up at 10:00 AM. Anchor down at Hawksbill Cay at 11:00 AM. Leftover curry for lunch. Went for a dinghy ride and tried unsuccessfully to get pictures of sea turtles. Explored the Russell ruins and checked out the cave. Nautical Miles = 4. Engine = 1 hour. Spending = Nil

Do you like curry? Can you imagine moving to an island like Hawksbill Cay and making a life there? Have you seen African Queen? If so, what'd you think of the scene with leeches?