“Hey, isn’t that Frank’s boat over there?” Scott said as he pointed at a sailboat dropping the hook a few boats away from us.

I put my book down and squinted in the bright sunlight. "Could be. It looks like a Moody sailboat. But who are all those people on deck? I thought Frank was single handing his boat."

"Good point." Scott got out the binoculars and had a closer look. "Hmm. Maybe it isn't his boat. I don't see him over there."

Scott put the binoculars down and ate some of the spicy pretzels we were having with our sun downers. I grabbed the bowl away before he could finish them off. Sometimes, you have to be proactive if you want your fair share.

"Could you see the boat name?" I asked.

"No, but it sure does look like his boat. But the big question is, if it is Frank's boat, where's Frank?"

"Oh my goodness!" I screamed. "Frank's dead! Those people stole Frank's boat, did away with him and stashed his body somewhere. Poor Frank. He really was such a nice guy."

I ate some spicy pretzels to console myself.

Scott rolled his eyes. "We're going to have to cut you off. No more murder mysteries for you."

I ignored him and looked back over at Frank's boat. "I wonder where they hid the body. On our boat, it would make sense to stash a body in our lazarette."

I noticed Scott looking around for the spicy pretzels. I tucked the bowl down beside me where he wouldn't see it.

"You remember that whole blog post I wrote about hiding bodies on our boat?" I asked as I quickly put a pretzel in my mouth.

Scott rolled his eyes yet again. "I do. If you keep writing about this kind of stuff, people might start suggesting to the police that they search our boat."

"Good point. The place is a tip. It'd be a real drag if the police came on board. I'd really have to do a good tidy up."

We met Frank back at Indiantown Marina. He's a fellow Moody sailboat owner. As they're British boats, you don't run into too many of them all that often in North America, although there are a surprising number of them stored at Indiantown. So, it's always fun to meet someone else who has a Moody.

We ran into Frank again when we were at Marsh Harbour and that might have been him anchored at Hope Town when we were there. But, as our visit was pretty short, we never did have a chance to fully investigate his disappearance. I'm sure he's fine. At least, I hope so.

Hope Town is one of the highlights for cruisers in the Abacos. We really enjoyed it when we visited in 2015 (which you can read about here) and we enjoyed it again this season.

Its iconic red and white striped lighthouse is a must see for visitors. And if you're up for it, climbing up to the top gives you great views of the harbor and surrounding area. 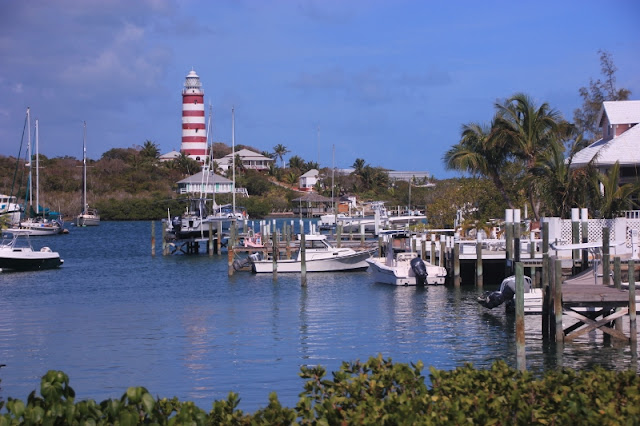 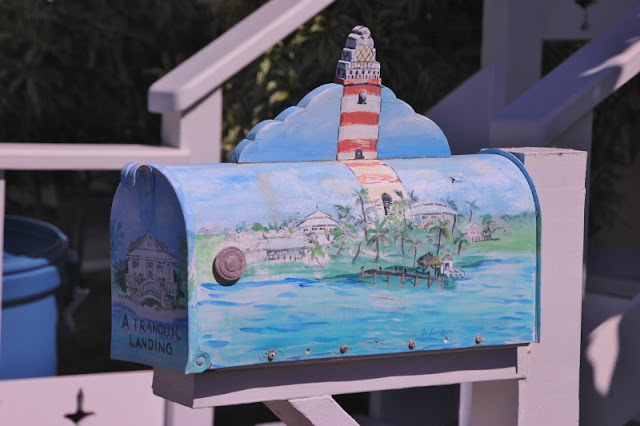 You'll even find miniature lighthouses. I love tiny things. Everything is better when it's small. Of course, being only 5' tall, I'm bound to say that. 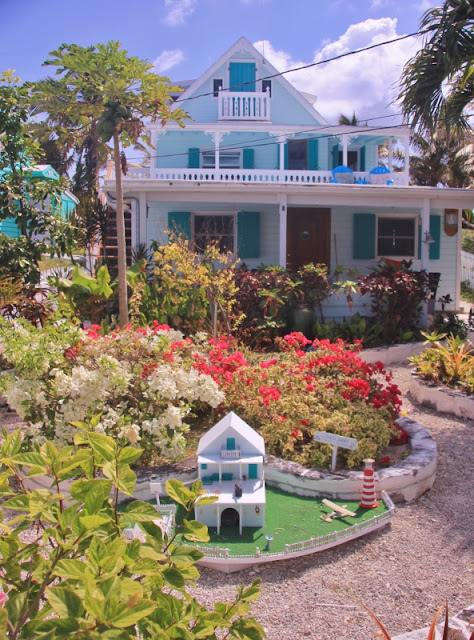 If you manage to wrest yourself away from the lighthouse and go for a walk through the settlement, you'll find lots of lovely brightly colored houses, cute shops, a church, a library, restaurants and a cemetery. Pretty much everything you need can be found in Hope Town. 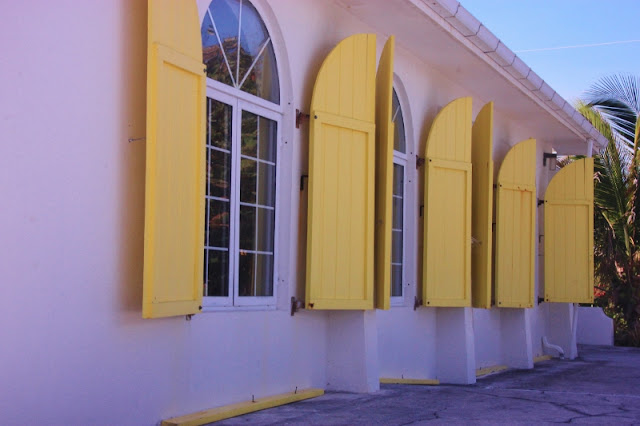 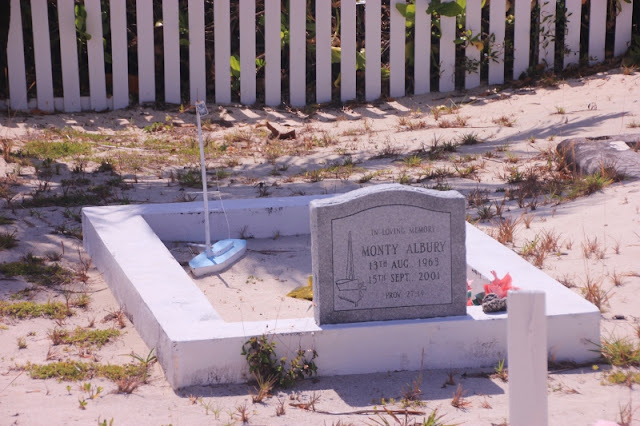 Hopetown is on an island, Elbow Cay, which means you're never far from the water. 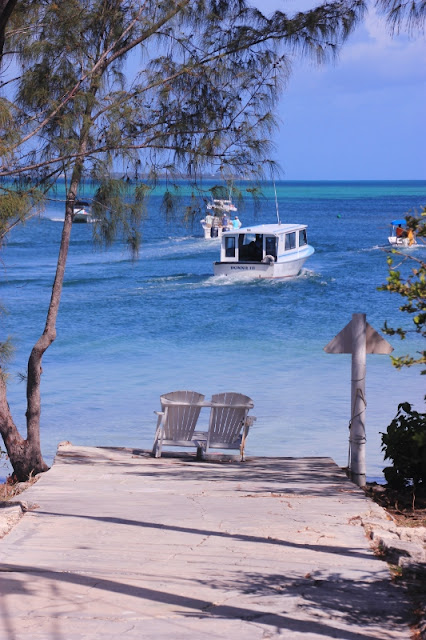 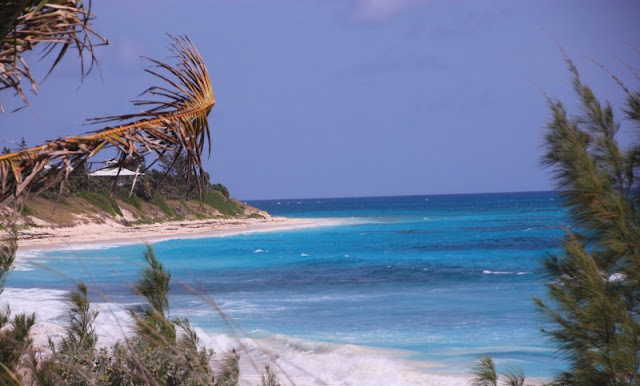 We brought a picnic lunch with us and ate it at a little memorial garden overlooking the ocean. It wasn't anything exciting, just leftovers from the night before, but the view made up for that. 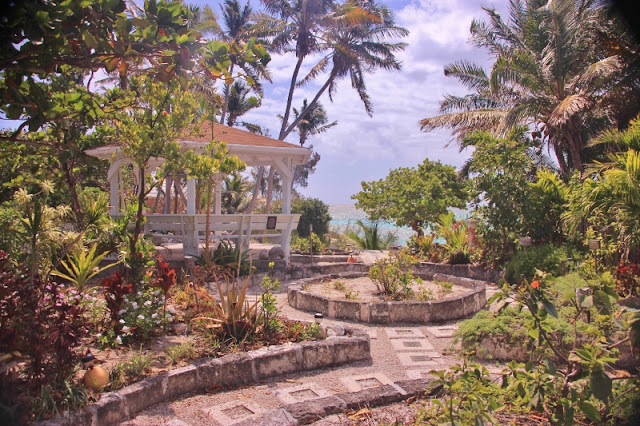 Afterwards, we dropped off our pop cans at the recycling center. It was refreshing to see recycling in the Bahamas. People don't really recycle in Indiantown which is a bit depressing. 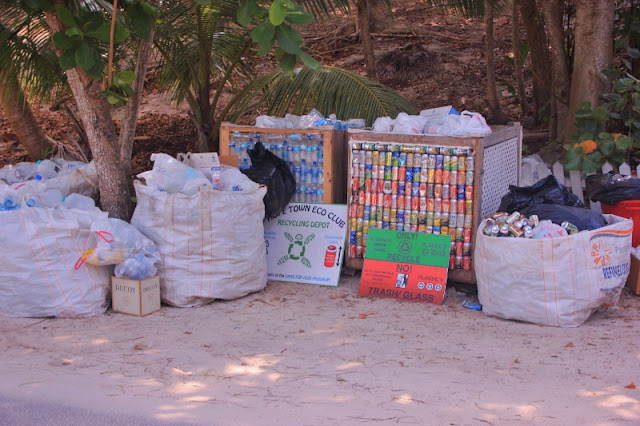 Then it was back to Tickety Boo to keep an eye out on Frank's boat and ponder his disappearance over sun downers in the cockpit. This time, I divided the spicy pretzels up into two bowls - his and hers.

18 APRIL
Walked around Hope Town. Found butane at Vernon’s grocery store for a surprisingly reasonable price. Had had a dream about finding a pack of butane cartridges just like these in a tiny Bahamian store. Eerie. Climbed to top of lighthouse. Nautical miles = Nil. Engine hours = Nil. Spending = $19.89 ($4.89 – carrots & tonic water, $15.00 – 4 butane cartridges)