Today is Michael d’Agostino’s Flashback Friday. The idea is to republish an old post of yours that maybe didn't get enough attention, or that you're really proud of, or you think is still relevant etc. We started this blog almost three years ago and have lots more followers now then we did back then (thanks guys!) and many of them may not have seen some of our earlier blog posts.

I had mixed feeling about whether to share this post for Flashback Friday. I often write quite silly and fluffy stuff on the blog, but this one is much more serious post about freedom of speech.

When we lived in New Zealand, we would walk the docks at our local marina and check out the other boats, and their names. One boat had a name which I found offensive. It inspired me to reflect on the importance of freedom of speech, even when you don't always like what someone else is saying.

I realize this post may not be everyone's cup of tea, but freedom of speech is something I've been thinking about quite a bit recently following the recent US election. I'm curious what you all think about it too. I'd love for you to have a read and share your thoughts in the comments.

{This post was originally published in September 2013. You can find it here.} 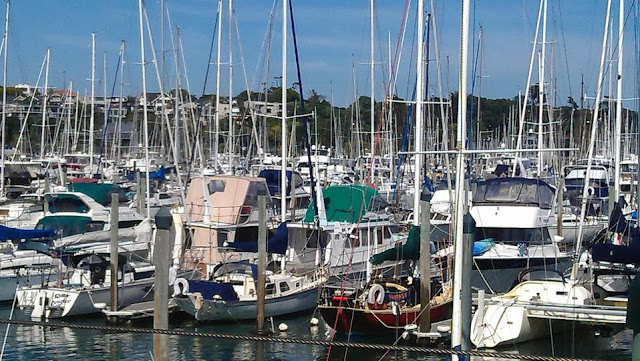 Westhaven Marina, where we currently keep our boat, is a lovely marina centrally located in Auckland with friendly staff, good facilities, great views of the downtown area and Waitemata Harbor and lots of different types of boats.

Like most children, all of the boats in Westhaven are sweet-natured and have their own unique beauty. Except for one boat who I suspect bullies the other boats in the marina around and quite frankly frightens me. I blame the boat’s parents for giving her what I think is an offensive name, which may be the reason she is so mean-spirited.

I’m not going to say what the name of the boat is, but it basically describes what a mob of angry people might do to a poor innocent person whom they hate because he or she is different. What they do their victim might involve a rope and a tree perhaps. And if you can’t quite figure out what the boat name means, they have a very helpful illustration on the side to help you out.
I’ve given some pretty obvious clues so you’ve probably figured out the name by now. If not, trust me, it isn’t pleasant. And if you’re American, it's particularly unpleasant. But maybe that’s just me.

I happen to think that describing ways to kill people on the side of your boat both in words and pictures isn’t very pleasant. A sailboat is meant to be a “pleasure vessel” and death kind of takes the “pleasure” out of it for me. You expect pirates and violence in the Gulf of Aden, but you don't really expect to see a boat with a death threat on it sailing in the beautiful Hauraki Gulf in New Zealand.

I try to give the boat owners the benefit of doubt. Maybe they adopted her and find it too expensive and time consuming to change the name she came with (I can relate to being cheap and lazy). Perhaps they don’t know what their boat name means (although the picture kind of gives it away). They’re probably Kiwis so I imagine the name doesn’t have the same impact on them that it would have on an American (although it does describe a way to kill people). Maybe they can’t read (but again there's the picture). Or maybe they’re just trying to be ironic. Who knows.

Part of me would love to set up my own little private agency which gives out tickets to people with offensive boat names (and maybe silly and stupid boat names too), but then I remember that I’m a big fan of freedom of speech and that it does come with a price. Sometimes that price involves being offended. People are free to  name their boat what they want and I'm free to choose to be offended or not.

By the way, feel free to give us a ticket for having a silly boat name – Rainbow’s End. We inherited the name when we bought the boat and, while it isn’t the name we would have chosen, we don’t find it offensive. Plus we’re too cheap to change her name and repaint the boat. And the bonus picture of a seahorse on the stern somehow makes up for it. If you’re offended by the name “Rainbow’s End”, exercise your freedom of speech and let us know.

What are the best and/or worst boat names you've come across? What are your thoughts on freedom of speech?


Posted by The Cynical Sailor at 1:00 AM