Living Without A Microwave 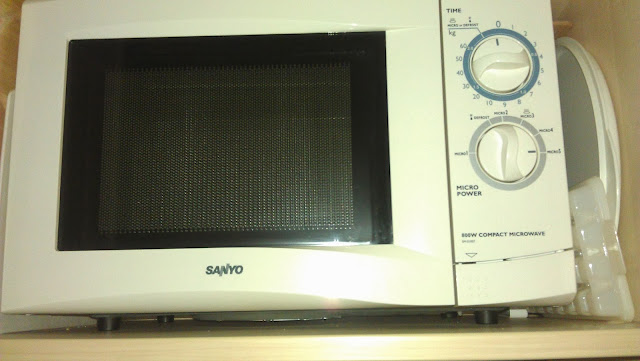 My microwave broke a couple of weeks ago and I’ve been too lazy to call my landlord to see about getting another one. I was starting to feel guilty about being such a lazy slug but then I realized I’m not actually lazy, my subconscious is getting me prepared to live without a microwave once we move onto our boat full-time. Not only will I not have a fridge, an oven, a washing machine and a dishwasher, I’m also going to be microwave-less. It is probably better to practice living without some of these things on land rather than go cold turkey all at once. My subconscious is so smart.

I’ve realized that I only actually use the microwave for two things – to heat up leftovers and to make porridge. Actually, I also use it to occasionally melt squares of Whittaker’s Dark Ghana chocolate so that I can lap up the chocolaty goodness with a spoon. Slightly weird, but oh so delicious. Not having a microwave, I’ve had to find new ways to do things. I tried “coldmeal” first. That’s where you take oatmeal and let it soak in milk for a while and then you eat the cold oatmeal mess. Well, you actually only eat one spoonful and then you throw the rest out because it is gross. So, I resorted to making oatmeal on the hob. I definitely much prefer the gloopy warm consistency of cooked oatmeal. What I don’t like is the mess – you get gloopy oatmeal on the pot and a bowl. With the microwave, you only have gloopy goodness on the bowl. I’ve started eating toast now.

The heating up of leftovers was really starting to perplex me but then I discovered a high-tech, new-fangled way to do this. It is a really radical idea but it actually works. I bet it will be really popular with the youngsters - they’re always so cutting edge and on trend with the latest fads. The days of the microwave may be over. Just three simple steps. If I can master this technique, you can too.


We won’t actually be using this new method on the boat, as we don’t have a fridge. And without a fridge, you can’t really keep leftovers safely for the next day to heat up unless you want to play Russian roulette with your digestive tract.

I’ve heard that microwaves can also be used for more than just making oatmeal and heating up leftovers. Apparently, you can use it to store electronic devices such as a portable GPS and mobile phones during electrical storms. The electromagnetic pulse somehow is conducted around the microwave and avoids the stuff inside. No idea how it works, but it pays not to question magic too much. So maybe, when we buy our next boat we might end up splurging on a microwave given its magical protective powers.

I still haven’t figured out how to melt my chocolate squares without the microwave. Oh well, I’ll let my subconscious work that one through while I take a nap.

Posted by The Cynical Sailor at 4:00 AM